Appointed By His Majesty | His Eminence Archbishop Yesehaq 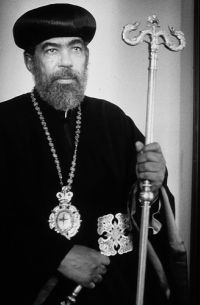 His Eminence Archbishop Yesehaq (Mandefro) of the Western Hemisphere, also Abuna Yesehaq or Father Isaac (born Laike Maryam Mandefro in 1933 in Adwa, Ethiopia – died December 29, 2005 in Newark, New Jersey), was a leader of the Ethiopian Orthodox Tewahedo Church in the Western Hemisphere.

Archbishop Yesehaq was born Laike Maryam Mandefro to an Ethiopian Orthodox family in 1933. He grew up in the Debra Libanos monastery from the time he was three years old. Attending liturgical schools in Ethiopia, he excelled in spiritual knowledge as well as in secular studies, and was ordained a deacon and priest there. He was one of the clerics fortunate enough to be tutored personally by Emperor Haile Selassie The First, the titular head of the Church. Abba Laike Mandefro, as he was then known, was originally appointed by the Emperor Haile Selassie and was sent to the Americas in 1962 to tend to Ethiopians principally in the United States and Jamaica.Since October 1959, the Ethiopian Orthodox Church had officially established a branch in New York, and Abba Laike Mandefro was given the task of finding a more suitable building for the Church, which was purchased in 1966. However when Mandefro returned to Ethiopia to seek assistance for renovations, the building was claimed by the New York City authorities in his absence. With the assistance of Emperor Haile Selassie however, and the Ethiopian consulate in New York, Mandefro returned to New York City and purchased another site for the Church in 1969.

Abuna Yesehaq’s work in the Caribbean began after Emperor Haile Selassie I visited Jamaica in 1966 (Grounation Day) and was thronged by local Rastafarians, who saw Selassie as a modern-day messiah. According to church leaders, Selassie denied being a deity and urged Yesehaq to try to draw the Rastafarians to the Ethiopian church. Upon his return to Ethiopia from Jamaica, Emperor Haile Selassie I spoke to Abuna Yesehaq,Hieromonk of the Ethiopian Orthodox Church abroad, and declared:

“There is a problem in Jamaica…. Please, help these people. They are misunderstanding, they do not understand our culture…. They need a church to be established and you are chosen to go.”

Thus in 1970 Abuna Yesehaq was sent to Jamaica where he began to minister specifically to the Rastafari community, at the official invitation of Rasta elders including Joseph Hibbert, who was in turn named as a “Spiritual Organizer” by Mandefro. In the course of a year he baptized some 1200 dreads and laid the foundation for the church’s subsequent growth. He also encountered fierce opposition from those Elders who taught that Haile Selassie was Jah in essence and demanded “baptism in Ras Tafari’s name”. In Montego Bay, only one dread accepted Orthodox baptism; Laike Mandefro baptized him Ahadu — “One Man”.

Many government officials and others in Jamaica were deeply disappointed that Abba Mandefro defended the Rastafarians’ faith on many occasions, and that he baptised thousands of them, pointedly refusing to denounce their faith in Haile Selassie as the returned Christ. On the other hand, a large number of other Rastas were likewise disappointed because he would not baptise them in the name of the Emperor, but only in the name of Jesus Christ.

In a November 25, 1984 newspaper interview with Archbishop Yesehaq done by Barbara Blake Hannah in the Jamaica Gleaner’s Sunday Magazine (The Sunday Gleaner), titled “Abuna Yesehaq Looks Back on 14 Years of Ministry in Jamaica”, the Archbishop said the following about Bob Marley’s baptism, which had taken place on November 4, 1980:

“Bob was really a good brother, a child of God, regardless of how people looked at him. He had a desire to be baptised long ago, but there were people close to him who controlled him and who were aligned to a different aspect of Rastafari. But he came to Church regularly. I remember once while I was conducting the Mass, I looked at Bob and tears were streaming down his face…When he toured Los Angeles and New York and England, he preached the Orthodox faith, and many members in those cities came to the Church because of Bob. Many people think he was baptised because he knew he was dying, but that is not so…he did it when there was no longer any pressure on him, and when he was baptised, he hugged his family and wept, they all wept together for about half an hour.”

In 1979 he received the title “Archbishop Yesehaq of the Western Hemisphere and South Africa”.

Glory be to God Who is glorified in His Saints. Amen