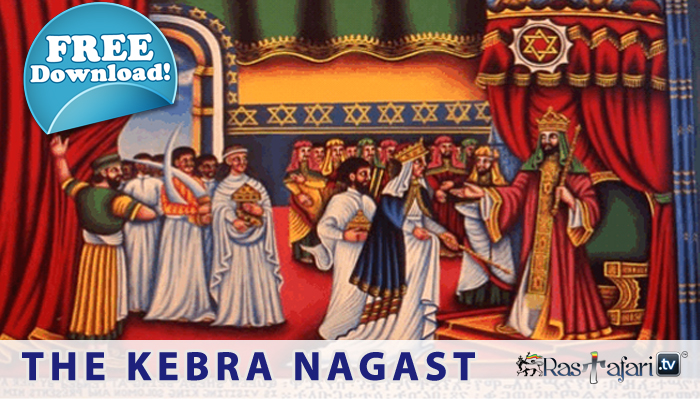 The Kebra Nagast (var. Kebra Negast, Ge’ez ክብረ ነገሥት, kəbrä nägäśt), or The Glory of the Kings, is a 14th-century account written in Ge’ez of the origins of the Solomonic line of the Emperors of Ethiopia. The text, in its existing form, is at least 700 years old and is considered by many Ethiopian Christians and Rastafari to be an inspired and a reliable work. It contains an account of how the Queen of Sheba/ Queen Makeda of Ethiopia met King Solomon and about how the Ark of the Covenant came to Ethiopia with Menelik I (Menyelek). It also discusses the conversion of the Ethiopians from the worship of the Sun, Moon and stars to that of the “Lord God of Israel”. As the Ethiopianist Edward Ullendorff explained in the 1967 Schweich Lectures, “The Kebra Nagast is not merely a literary work, but it is the repository of Ethiopian national and religious feelings.”

The Kebra Nagast is divided into 117 chapters, and is clearly a composite work; Ullendorff describes its narrative “a gigantic conflation of legendary cycles.”The document is presented in the form of a debate by the 318 “orthodox fathers” of the First Council of Nicaea. These fathers pose the question, “Of what doth the Glory of Kings consist?” One Gregory answers with a speech (chapters 3-17) which ends with the statement that a copy of the Glory of God was made by Moses and kept in the Ark of the Covenant. After this, the archbishop Domitius reads from a book he had found in the church of “Sophia” (possibly Hagia Sophia), which introduces what Hubbard calls “the centerpiece” of this work, the story of Makeda (better known as the Queen of Sheba), King Solomon, Menelik I, and how the Ark came to Ethiopia (chapters 19-94).

Although the author of the final redaction identified this Gregory with Gregory Thaumaturgus, who lived in the 3rd century before this Council, the time and the allusion to Gregory’s imprisonment for 15 years by the king of Armenia make Gregory the Illuminator a better fit.

Queen Makeda learns from Tamrin, a merchant based in her kingdom, about the wisdom of King Solomon, and travels to Jerusalem to visit him. She is enthralled by his display of learning and knowledge, and declares “From this moment I will not worship the sun, but will worship the Creator of the sun, the God of Israel.” (chapter 28) The night before she begins her journey home, Solomon tricks her into sleeping with him, and gives her a ring so that their child may identify himself to Solomon. Following her departure, Solomon has a dream in which the sun leaves Israel (chapter 30).

On the journey home, she gives birth to Menelik (chapter 32).

At the age of 22, Menelik travels to Jerusalem by way of Gaza, seeking Solomon’s blessing, and identifies himself to his father with the ring. Overjoyed by this reunion, Solomon tries to convince Menelik to stay and succeed him as king, but Menelik insists on returning to his mother in Ethiopia. King Solomon then settles for sending home with him a company formed from the first-born sons of the elders of his kingdom. This company of young men, upset over leaving Jerusalem, then smuggle the Ark from the Temple and out of Solomon’s kingdom (chapters 45-48) without Menelik’s knowledge. He had asked of Solomon only for a single tassel from the covering over the Ark, and Solomon had given him the entire cloth.

During the journey home, Menelik learns the Ark is with him, and Solomon discovers that it is gone from his kingdom. The king attempts to pursue Menelik, but through the Ark’s mysterious power, his son with his entire entourage is miraculously flown home to Ethiopia before Solomon can leave his kingdom. King Solomon then turns to solace from his wife, the daughter of the Pharaoh of Egypt, and she seduces him into worshiping the idols of her land (chapter 64).

After a question from the 318 bishops of the Council, Domitius continues with a paraphrase of Biblical history (chapters 66-83) then describes Menelik’s arrival at Axum, where he is feasted and Makeda abdicates the throne in his favor. Menelik then engages in a series of military campaigns with the Ark, and “no man conquered him, on the contrary, whosoever attacked him was conquered” (chapter 94).

After praising the book Domitius has found, which has established not only Ethiopia’s possession of the true Ark of the Covenant, but that the Solomonic dynasty is descended from the first-born son of Solomon (chapter 95). Gregory then delivers an extended speech with prophetic elements (chapters 95-112), forming what Hubbard calls a “Patristic collection of Prophecies”: “There can be little doubt that chapters 102-115 are written as polemic against, if not an evangel to, the Jews. These chapters seek to prove by OT [Old Testament] allegories and proof-texts the Messianic purpose of Jesus, the validity of the Ethiopian forms of worship, and the spiritual supremacy of Ethiopia over Israel.” Hubbard further speculates that this selection from the Old Testament might be as old as Frumentius, who had converted the Kingdom of Axum to Christianity.

The Kebra Nagast concludes with a final prophecy that the power of Rome will be eclipsed by the power of Ethiopia, and describes how king Kaleb of Axum, will subdue the Jews living in Najran, and make his younger son Gabra Masqal his heir (chapter 117).

According to the colophon attached to most of the existing copies, the Kebra Nagast originally was written in Coptic, then translated into Arabic in the Year of Mercy 409 (dated to AD 1225) by a team of Ethiopian clerics—Yəsḥaq, Yəmḥarännä ˀAb, Ḥəzbä-Krəstos, Ǝndrəyas, Filəp̣p̣os, and Mäḥari ˀAb—during the office of Abuna Abba Giyorgis, and finally into Ge’ez at the command of the governor of Enderta Ya’ibika Igzi’. Based on the testimony of this colophon, “Conti Rossini, Littmann, and Cerulli, inter alios, have marked off the period 1314 to 1321-1322 for the composition of the book.”. Marcus, (1994), indicated that the religious epic story was conflated in the fourteenth century by six Tigrayan scribes. Other sources put it as a work of the fourteenth century Nebura’ed Yeshaq of Aksum. Recent historians to consider the evidence place it as late as the end of the sixteenth century, when Muslim incursions and contacts with the wider Christian world made the Ethiopian Church concerned to assert its character and assert Jewish traditions.

Careful study of the text has revealed traces of Arabic, possibly pointing to an Arabic vorlage, but no clear evidence of a previous Coptic version. Many scholars doubt that a Coptic version ever existed, and that the history of the text goes back no further than the Arabic vorlage. On the other hand, the numerous quotations in the text from the Bible were not translated from this hypothetical Arabic vorlage, but were copied from the Ethiopian translation of the Bible, either directly or from memory, and in their use and interpretation shows the influence of patristic sources such as Gregory of Nyssa.

Hubbard details the many sources that the compiler of the Kebra Nagast drew on in creating this work. They include not only both Testaments of the Bible (although heavier use is made of the Old Testament than the New), but he detects evidence of Rabbinical sources, influence from deuterocanonical or apocryphal works (especially the Book of Enoch and Book of Jubilees, both canonical in the Ethiopian Orthodox Church, and such Syriac works as the Book of the Cave of Treasures, and its derivatives the Book of Adam and Eve and the Book of the Bee). Marcus thus describes it as “a pastiche of legends … [that] blended local and regional oral traditions and style and substance derived from the Old and New Testaments, various apocryphal texts, Jewish and Islamic commentaries, and Patristic writings”.

One of the earliest collections of documents of Ethiopia came through the writings of Francisco Álvares, official envoy which king Manuel I of Portugal, sent to Dawit II of Ethiopia, under Ambassador Dom Rodrigo de Lima. In the papers concerning this mission, Álvares included an account of the Emperor of Ethiopia, and a description in Portuguese of the habits of the Ethiopians, titled The Prester John of the Indies, which was printed in 1533.

Additional information on the Kebra Nagast was included by the Jesuit priest Manuel de Almeida in his Historia de Etiopía. Almeida was sent out as a missionary to Ethiopia, and had abundant opportunity to learn about the Kebra Nagast at first hand, owing to his excellent command of the language. His manuscript is a valuable work. His brother, Apollinare, also went out to the country as a missionary and was, along with his two companions, stoned to death in Tigray.

In the first quarter of the 16th century, P.N. Godinho published some traditions about King Solomon and his son Menelek, derived from the Kebra Nagast. Further information about the contents of the Kebra Nagast was supplied by Baltazar Téllez (1595–1675), the author of the Historia General de Etiopía Alta (Coimbra, 1660). The sources of Téllez’s work were the histories of Manuel de Almeida, Afonso Mendes and Jerónimo Lobo.

Beginnings of modern scholarship of the book

It was not until the close of the eighteenth century when James Bruce of Kinnaird, the famous Scottish explorer, published an account of his travels in search of the sources of the Nile, that some information as to the contents of the Kebra Nagast came to be generally known amongst European scholars and theologians.

When Bruce was leaving Gondar, Ras Mikael Sehul, the powerful Inderase (regent) of Emperor Tekle Haymanot II, gave him several of the most valuable Ethiopic manuscripts and among them was a copy of the Kebra Nagast. When the third edition of his Travels to Discover the Source of the Nile was published in 1813, a description of the contents of the original manuscript was included. In due course these documents were given to the Bodleian Library at Oxford University.

Although August Dillmann prepared a summary of the contents of the Kebra Nagast, and published its colophon, no substantial portion of the narrative in the original language was available until F. Praetorius published chapters 19 through 32 with a Latin translation.However 35 years passed before the entire text was published by Carl Bezold, with commentary, in 1905. The first English translation was prepared by E. A. Wallis Budge, which was published in two editions in 1922 and 1932.