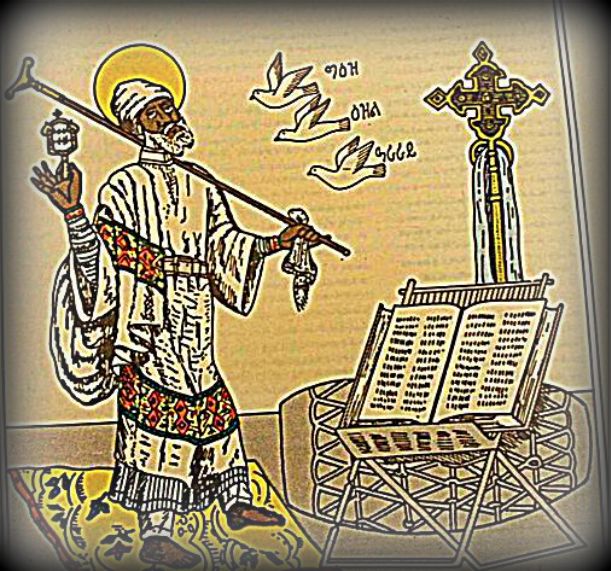 IN THE NAME OF THE FATHER AND THE SON AND THE HOLY SPIRIT,ONE GOD. AMEN

On this day died Job, the just. This Job was just, and excellent in his days, and God testifieth concerning him in the Holy Scriptures that there was none so just as he in his days. And Satan was envious of him, and asked God to give him power over Job, and over all his possessions; and God gave him power over him, for He knew the patience of Job the just. And Job became a pattern and an example for all those who should come after him, even as the Apostle James saith in his Epistle: “Behold, ye have heard of the patience of Job the just, and ye have seen how God behaved to this just man (James v, II); in one day all his possessions, and his beasts, and his sons, and his daughters were destroyed.” And this was not the only thing, for his own body [suffered], for Satan the Enemy smote him with a smiting of sickness of boils, from his head to his foot. And during all this sickness and severe pain he continued to endure patiently, and to give thanks to God, and on no day did he complain, and he never blasphemed his Creator, except only when he cursed the day on which he was born. And when all his possessions had been destroyed, and his beasts, he said, “God gave and God hath taken, blessed be the Name of God for ever!” (Job 1:21). And he remained in this state of tribulation for thirty years, and he lay upon a dung-hill, and the rebukes of his friends were heavier upon him than his sickness, and the rebuke of his wife, who advised him to blaspheme his Creator; but he neither submitted to her advice nor listened to it. And he was tried and refined as gold is tried and refined in the fire, and God spoke unto him from the cloud, and healed him of his sickness, and He doubled for him his possessions and gave him other children. And he lived to a good old age, and pleased God, and died in peace. Salutation to Job.

And on this day also died the holy father Abba Theodore, the disciple of the holy father Abba Pachomius, father of the congregation of the spirit. This holy father was an ascetic, humble, and gentle, and a fighter, and subservient, and perfect in every kind of good work.He became a monk with Abba Pachomius, and he was as submissive to him as to God, and because of this Abba Pachomius loved him exceedingly; and grace was upon him, and he was a comforter to all the brethren who were in the Society. Wisdom and understanding were in him. Abba Pachomius set him to rebuke the brethren, and to teach them when he was still a young man. After the death of Abba Pachomius, this father Theodore, the companion of Abba Pachomius, was appointed Abbot of the Society in his stead. This holy man abounded in humility, and he fled from the vainglory of this world. And he finished his work and service, and departed to God, Whom he loved, being arrayed in the apparel of holiness. Salutation to Theodore, the heir of Pachomius.

And on this day also twenty-two souls who were with Abba ‘Esi became martyrs.
Glory be to God Who is glorified in His Saints. Amen.