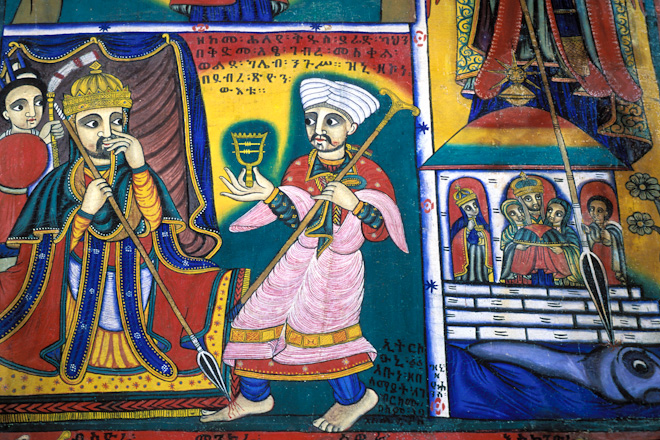 On this day died Saint Jason, the apostle. This holy man was one of the Seventy-two disciples whom the Lord chose. He preached with the Apostles, and he suffered the sufferings of our Lord, and God, and Redeemer Jesus Christ. And he performed very many signs and wonders, and power, and grace, and the Holy Spirit, Paraclete, descended upon him, with the Apostles, on the day of the feast of Pentecost, and he became a preacher. He was born in the city of Tarsus, and he was the first man of Tarsus who believed. And after this he was with Saint Paul, the apostle, in the preaching, and he went with him into many places. And they seized him, and Saint Paul, and Silas in the city of Thessalonica, and they dragged him forth to the governor of the city of Thessalonica.After this Saint Paul laid his hand upon him, and made him Bishop of the city of Tarsus, and he guarded the Church of the Son of God with good and excellent care. And having made the people thereof strong in the True Apostolic Faith, and taught them all the Ordinances of the Church, and good works, he departed to a city of the West, and preached the Holy Gospel unto the people thereof. And he came to an island, the name of which is “Korekueras,” and preached therein the preaching of the Gospel; and he built therein a church in the name of Stephen, the apostle, the archdeacon. When the governor of that city knew this, he seized him and shut him up in the prison house, wherein he found six thieves; and he taught them the True Faith of our Lord Jesus Christ, and baptized them with Christian baptism. And they cried out boldly before the governor, saying, “We are Christian,” and the governor cast them into a cauldron filled with [boiling] pitch and tar, and they received crowns of martyrdom. After this he brought Saint Jason the apostle out of the prison house, and had him tortured severely, but no harm whatsoever came to him.And the daughter of the king saw him from the verandah of her house, and she believed on our Lord Jesus Christ. And she brought out her raiment of fine linen, and her adornments, and she gave them to the poor and needy, and she confessed that she was a Christian, and she confessed the God of Saint Jason. And her father was wroth, and commanded his soldiers to cast her into the prison house, and they did as he commanded them, and they scourged her. Then they stripped her naked, and shot at her with arrows, and she delivered up her soul into the hand of God. And after this he sent Saint Jason to the island, and with him were martyrs. And the governor embarked in a ship, and there were soldiers with him, to go and torture them there, but God made the ship to sink in the river (or, sea), and all those who were with him, and Saint Jason gave thanks to God; and after his deliverance the saint continued to preach, and to teach the people for many years. And another governor was appointed, and he had Saint Jason and those who were with him brought before him, and he filled a great cauldron with pitch and wax, and the soldiers lighted a fire under them, and when they were melted he cast Saint Jason into the cauldron; and our Lord Jesus Christ delivered him, and the saint suffered no injury whatsoever. When the governor saw this, he believed on our Lord Jesus Christ, and the men of his house, and all the men of the city. And the apostle baptized them all with Christian baptism and he taught them the precepts of the Holy Gospel, and built churches for them, and this apostle performed many signs and wonders in them. And he died at a good old age, and with shining face, and he pleased God. Salutation to Jason, and to the king’s daughter, and to the thieves who believed through this saint.

And on this day also Abba Besoy became a martyr. This holy man was a native of Balget, and [the soldiers] tortured him by twisting round his limbs and body, and [hacking at them] with choppers. And the angel of the Lord, holding a crown in his hand, appeared unto him and said, “Fear thou not! Here is thy crown with fire”; and thus the saint finished his good course. Salutation to Abba Besoy, who finished his course by fire.
And on this day also are commemorated the honored Saint Eusebius the priest, and Saint Sem (Shem) the martyr.
Glory be to God Who is glorified in His Saints. Amen.