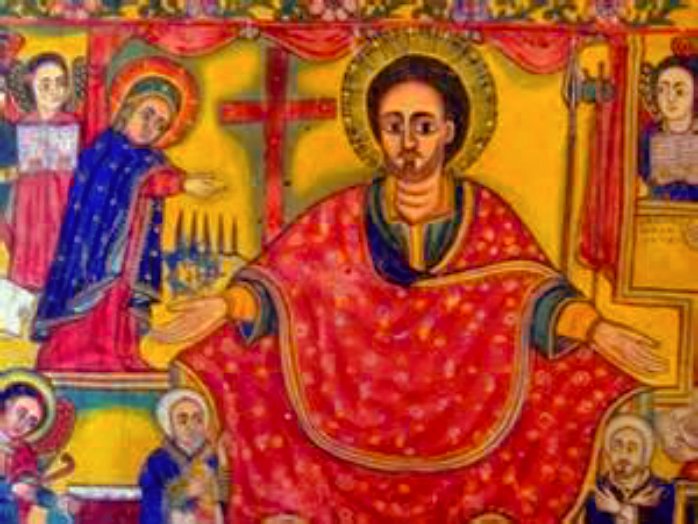 On this day died Saint Abba John the First (?), the twenty-ninth Archbishop of the city of Alexandria. This holy man was one of the believing sons of the people of the city of Alexandria, and he became a monk in his youth in the desert of Scete, in the monastery of Saint Abba Macarius. When Abba Athanasius, the archbishop, who was his predecessor, died, the bishops, and doctors, and all the people chose this father, and they took him by force and against his will. Now this holy man did not wish to become archbishop, and they made many petitions to him that he would not allow another man to be appointed over his flock, and put them to shame. And when he saw the bishops, and the doctors, and the chiefs of the Jews entreating him, he was afraid of them, and he said, “Peradventure this must be the Will of our Lord Jesus Christ”; and they made him the archbishop. And having taken his seat upon the throne of Mark the evangelist and apostle, he took thought for his flock, and more especially concerning the teaching of them, and he read the Scriptures to them, and strengthened them in the True Faith, and he set over them bishops, and priests, and doctors. And the emperor who was reigning in Constantinople in those days was Zeno, a just and believing and God-fearing man and he helped this saint, and he stretched out his hand over many cities, and the True Faith was extended by his hand throughout the country of Egypt. And in those days the Emperor Zeno sent to the desert of Scete, to the monastery of Saint Abba Macarius, ships full of grain, and wine, and oil, and many goods of all kinds, and whatsoever the monks needed for building churches and monasteries. And all the days of the life of this father were [passed] in quietness and peace; for God had given good will to men through the prayer and learning of this father. And then God visited this father with a little sickness, and he died in peace, having sat for eight years. Salutation to John, a royal kinsman, and builder of churches.

And on this day Sosima and Abba Noda (Sinoda), slaves of Victor, became martyrs.
Salutation to Sosima, and Noda (Sinoda).
Glory be to God Who is glorified in His Saints. Amen.