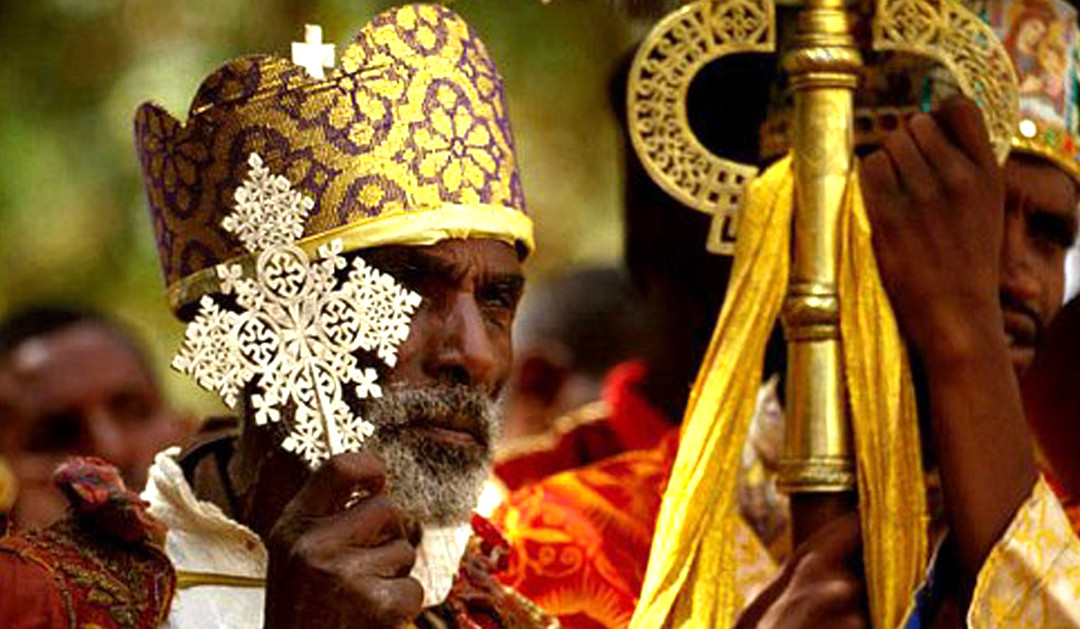 On this day Saint Abba John of the city of Senhut became a martyr. The name of the father of this holy man was Macarius, and the name of his mother was Hanna. As he was shepherding his father’s sheep, the angel of the Lord appeared unto him, and showed him a crown of light, and said unto him, “Why art thou sitting down? The fight is prepared, and the crowns are ready for those who will fight for the Name of Christ. And now, rise up and go to the city of Atrib (Athribis), and fight for the Name of our Lord Jesus Christ”; then He gave him [the salutation of peace], and departed from him. And straightway Saint Abba John rose up, and embraced his father and mother, and departed to the city of Atrib (Athribis), and he found the governor was in the bath house, and he confessed before him our Lord Jesus Christ, and proclaimed openly, “I am a Christian, and I believe on my Lord and God Jesus Christ, the Son of the Living God.” And the governor handed him over to one of his soldiers, and commanded him to entreat him kindly, [thinking] that perhaps he would change his mind, and be obedient to him; and then the governor departed to his work. And the soldier took the saint and carried him to his house, and the saint performed before him many signs and wonders, and the soldier believed on our Lord Jesus Christ. When the governor returned from his work the soldier confessed before him our Lord Jesus Christ, and received the crown of martyrdom in the kingdom of the heavens. And the governor commanded his soldiers to torture Saint John severely, with every kind of torture, and God strengthened him, and made him to endure [them]; and He sent His angel to heal his wounds and He raised him up whole and uninjured. And after this the governor sent him to the city of Antinoe, where the governor tortured him severely, and when he was tired of doing this he commanded the soldiers to cut off his head; and they cut off his holy head with the sword, and the saint received the crown of martyrdom in the kingdom of the heavens. And Saint John, who was from the city of Akpahsi, took the body of Saint John, and swathed it for burial, and sent it to his city Senhut, and all the people went out to receive it with joy and gladness, and with singing, and incense, and songs of praise, and music; and they laid it in the church, and through it many signs and wonders took place. Salutation to John.

And on this day also is commemorated the Ascension of our Lord and God and Redeemer, Jesus Christ, in the Body which He took from us, into the heavens, wherein is His Good Father and the Holy Spirit; and this took place after He had finished the operation of His wisdom upon earth, by His Passion, and His Death, and His Resurrection. And when forty days were ended after His Resurrection, He ascended into the heavens, seated upon the wings of the Cherubim, and the Seraphim, and the wings of the winds. And the prophecy of David was fulfilled, saying, “He mounted upon the Cherubim, and did fly on the wings of the wind” (Psalm xviii, 10). And by this Ascension those who believed on Him understood ascension into the heavens, and into the celestial habitation; for wherever the head is, it is meet that the members should be also. And as the old Adam dwelt first in the inheritance of the earth, and then in the Seol, so also the second Adam dwelt in the inheritance of the kingdom of the heavens, and sat down at the great right hand in the heights of the heavens. And our Lord Christ did not make His Ascension to follow His Resurrection immediately, in order that the heretics might not think and say that the Ascension was an inferior matter; but out Lord, in the operation of His wisdom, waited forty days after His Resurrection, and strengthened the faintheartedness of His disciples, and made their souls to understand His Resurrection. And the prophecy of Daniel the prophet concerning the Resurrection of our Lord was fulfilled, saying, “I saw as it were the Son of Man coming upon the cloud of heaven until He drew near the Ancient of Days. And He gave Him authority, and sovereignty, and honor so that every nation, and people, and tongue should worship Him. And His authority is an everlasting authority, and His sovereignty unending “ (Daniel viii, 13, 15), to Whom with His Good Father and the Lifegiving Holy Spirit be glory for ever and ever. Amen. Salutation to Thy Ascension to Thy Father, Thou didst return like a warrior bringing his spoil with him. Salutation with praise, and singing, and music, to Thy Ascension. Salutation to the Protector of Adam, Who, as David saith, “Went up with the sound of the trumpet” (Psalm 47:5).

And on this day also died the holy father Abba Daniel, abbot of the desert of Scete. Thisholy and just man was pure and perfect. And when his fame was noised abroad the lady Anatasia came to him wearing the apparel of her exalted rank, and she became a nun, and lived in a cell near him for eight and twenty years; and no man knew that she was a woman. And this holy man saw a certain man whose name was Eulogius, and who worked stones for a karat of gold each day; upon a very small portion of this he lived, and with the remainder he fed the poor and needy, and what food they left he gave to the dogs. And he never saved anything for the morrow. And when the holy man saw his good fight, and the excellence of his deeds, he asked God to give Ewlhis worldly goods so that he might increase his good works and charities therewith; and then he became surety for Eulogius. And as Eulogius was working stone in the quarry, he found a deposit of stones of gold, and he took them, and departed to the city of Constantinople, where he became a great officer of the emperor; and he forsook the good trade at which he formerly worked. And when Saint Abba Daniel heard about him, he went to the city of Constantinople, and he saw that Eulogius had become a great officer, and that he rode a horse with great pride, and that many soldiers surrounded him, and that he had abandoned his good trade. Then the saint saw a vision wherein our Lord Jesus Christ was sitting and judging men, and He commanded [His angels] to hang Saint Abba Daniel, and they demanded from him the soul of Eulogius; and he saw how our Lady Mary entreated our Lord Jesus Christ on his behalf. And straightway the holy man awoke from his sleep, and he returned to his monastery and entreated God on behalf of Eulogius, that He would bring him back to his former state of poverty. And the angel of the Lord appeared unto him, and rebuked him for daring [to interfere with] God concerning His judgment of His creation. And after this the Emperor Constantine died, and another emperor reigned in his stead; and he rose up against Eulogius, and took away all his goods, and wanted to kill him. And Eulogius fled from him in order to save his life, and he came to his native city, and worked stone in the quarry as formerly. And Saint Abba Daniel came back to him, and told him how one had hanged him instead of him in the vision, and how one had demanded his soul from him. And the spirit of prophecy was upon this holy man, and God made manifest many signs and wonders through him. And when the heretics tried to make him to go forth from the True Faith he refused, and he seized the roll wherein was [written] the [unclean] Faith and tore it up; and the officer of the emperor punished him very severely. And after this when God willed to give him rest, He sent to him His angel who informed him of the time of his departure from this world; and he gathered together the monks, and commanded them, and strengthened them, and comforted them, and he died in peace. Salutation to Daniel who gave sight to the blind when they washed in the water wherein he had bathed his feet.

And on this day also Saint Maximus, the fighter, became a martyr.
Glory be to God Who is glorified in His Saints. Amen.