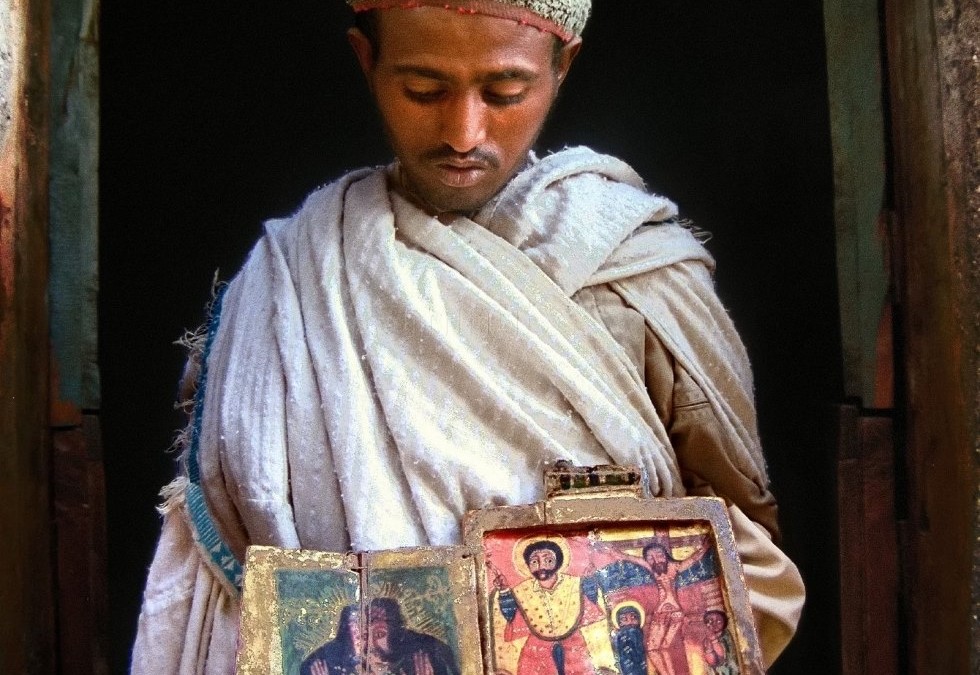 On this day died the pure and holy woman, the Empress Helena. This holy woman belonged to the people of the city of Roha (Edesa); her parents were Christians, and they brought her up carefully and piously, and they taught her the learning of books, and the doctrine of the Church. She was exceedingly beautiful, and the beauty of her soul (or, mind) exceeded the beauty of her body. In those days Konesta the King of Barntya (Byzantium) came to the city of Roha (Edessa), and he heard the story of the virtues of this holy woman, and that she was beautiful in her person, and he sought her out and married her, and he begot by her the Emperor Constantine, the first of the Christian emperors. And she brought him up very carefully and she taught him philosophy and science. When he became emperor, Helena saw in a dream as if one said unto her, “Go to Jerusalem and lay bare the Cross, and the beautiful holy places”; and she told her son what she had seen. And he sent soldiers with her to Jerusalem, and she searched for the wood of the Cross, which giveth life, until she found it; and she found the two crosses whereon the two thieves were crucified. And she wished to know which was the Cross of our Lord Christ, and Saint Mark, Bishop of Jerusalem, told her that it was the Cross over the head of which was the writing which said, “This is Jesus, the King of he Jews.” And then she wished to see a miracle [wrought] by it so that her heart might be glad. At that moment, by the Will of God, our Lord Jesus Christ, she had a dead man brought, and laid upon those two crosses, but the dead man did not rise up; then she had the dead man laid upon the Cross of our Redeemer, and straightway he rose up. And her faith and her joy were increased thereby. At that same time she decided to build the holy churches which are mentioned in the section for the twenty-sixth day of Meskaerem, and then she gave much money to Abba Macarius so that he might build churches, and all the shrines. And she took the Honorable Cross and the nails, and returned to Constantine her son, and gave them to him, and she rejoiced; and the emperor rejoiced with a very great joy, and he embraced the Honorable Cross and honored it exceedingly. And he made for it a case of gold, decorated with pearlstones, and he took the nails and worked some of them into his helmet, and some of them he placed in the bridle of his horse, in order that might be fulfilled that which was written, saying, “Salvation shall be in the bridle of the king.” And this saint fought a good fight, and she endowed churches and monasteries largely and provided means whereby the poor and needy were to be fed and clad; and all her days were eighty years, and she died in peace. Salutation to Helena.
And on this day also are commemorated Baydar, and Sylvanus.
Glory be to God Who is glorified in His Saints. Amen.