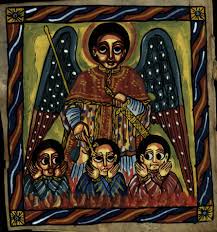 And on this day also are commemorated Thecla the martyr, and Paula.

And on this day also died Abraham, the artisan. This saint was a man from the city of Markyas (Marcia), and from the monastery, which was called the monastery of the martyr Theodore. And the mother of the child gave him to the teacher so that he might learn the Faith of our Lord Christ; and God opened the eyes of his heart, and he learned all the Law of the Church, and began to fast and to pray. When he was nine years old, he learned the craft of the stone cutter, and he made stone bases, and water troughs (?), whereby he made much money; and he gave alms to the poor and needy. One night when he was praying, he remembered the end of the world, and of all that is therein, and he wished to become a martyr for the Name of our Lord Jesus Christ. And straightway the angel of the Lord appeared unto him, and gave him the salutation of “Peace,” and he said unto him, “Be strong and fear not, for thou shalt overcome thine enemy and shalt receive the crown of martyrdom.” Then he went to the church of Saint Theodore, and received Christian baptism, and he stood up before the picture of the saint, and he prayed for a long time, and committed himself to his care; then he departed to the governor and confessed that he was a Christian. And straightway the governor tied his hands behind his back with heavy pieces of wood attached, and then threw him out in the sun [to suffer] hunger and thirst. And at midnight our Lord appeared unto him, and gave him the promise concerning the man who should call upon his name, or celebrate his commemoration. Then the governor commanded his soldiers to cut off his head, and when they cut off his head, it flew up in the air above the people assembled there, and cried out three times, “I am a Christian”; and it went a distance of fifty cubits and fell into the river. Then they slit open his belly, and filled it with pitch, and bitumen, and boiling oil, and cast his body into a red-hot furnace, and it suffered no injury whatsoever. Then they cut the body into small pieces, and put them into a basket, and cast them into the river, and by the Will of God his body appeared at the edge of the city of Esna, with its head joined thereto; and certain believing men took it, and buried it with great honor. Salutation to Abraham.

And on this day also is celebrated the consecration of the church of Abba Misael. The parents of this saint were rich Christians, and as they lacked a son they prayed to God for one, and they begot this saint; and when he grew up they taught him the Books of the Church. When his parents died, the bishop of the city took care of him. When the boy was twelve years old he remembered the end of the world, and he went to the monastery of Abba Isaac, and asked the abbot to be allowed to become a monk; and after Abba Isaac had tried him, and seen his holiness, he made him a monk. And the grace of the Holy Spirit descended upon him, and he devoted himself so greatly to fasting and prayer, that the light of his face was changed, and his body became like dry wood. One day he went into the cell of Abba Isaac, and when the abbot saw that his face had become like that of a dead man, he wept and said unto him, “How didst thou destroy thyself in this fashion?” And the holy Abba Misael (Michael ?) said unto him, “Weep not, O my father, for God hath not forsaken me, and my strength is not exhausted by standing up; but this I will tell thee. I saw in my dream as it were envoys of the emperor coming to thee from Alexandria, and seeking for me; do not prevent them, so that they may not harm thee. And in the coming year a great famine shall take place, and lay waste the land; gather together food for thy children.” And after a few [days] men came in the form of soldiers of the emperor, and they seized Abba Isaac whilst seeking for Misael (Michael ?), and when they knew which was he, they took him with them, and they left the monks sorrowing. When the famine came, and the governor [knew] that there was food in that monastery he wished to attack [the monks therein]. And Abba Isaac went out in order to make entreaty to him, and immediately there came forth from the desert many soldiers with swords and drove away the governor. And whilst Abba Isaac was wondering about these men, Abba Misael (Michael ?) came to him, and revealed himself to him, and told him that these men were soldiers of heaven, and that the city whereto they had taken him was the heavenly Jerusalem. And then he commanded them to build a church for him in the form of his cell, and they consecrated it, as it were this day. And Abba Misael (Michael ?) appeared to Abba Isaac, and told him that he would die the following year, and so it happened, even according to his word. Salutation to Abba Misael (Michael ?).
And on this day also three hundred and fifty-eight people were martyred with Abba Nob.

And on this day also died John, the patriarch. Salutation to John the patriarch, who labored at dawn, and fought at even (i.e. performed manual labor by day, and contended with devils during the night).
Glory be to God Who is glorified in His Saints. Amen.