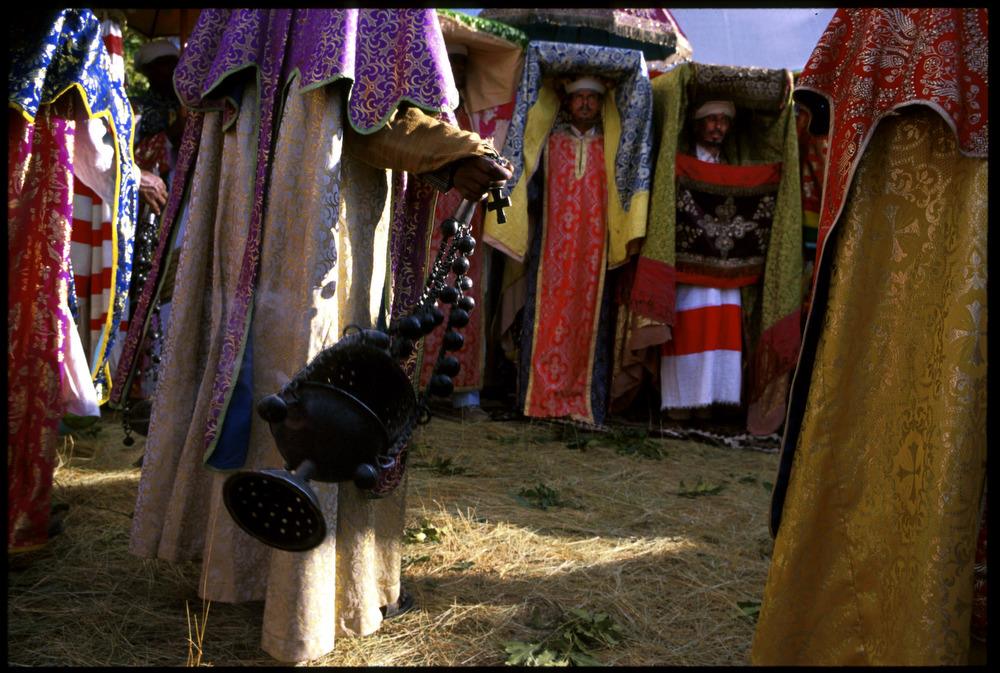 On this day became a martyr Saint Simon the zealot, the apostle. He it was who was called “Nathaniel.” This saint was from Cana of Galilee, and he was learned in the Law of the Torah, and in the Books of the Prophets, and he had in him zeal and was therefore called Zealot, and he was just and pure in the Faith, and he accepted the person of no man. And it was because of this that when Philip said unto him, “Behold, we have found our Lord Christ, concerning Whom Moses the prophet wrote, Jesus, the son of Joseph, from Nazareth,” he would not agree with him, but said unto him, “Can any good thing come out of Nazareth?” And Philip said unto him, “Come and see,” and when he came, our Lord said unto him, “This is an Israelite in whose heart there is no deceit.” But Simon did not incline to praise, and he demanded from Him a reason for His praise, and he said unto our Lord, “Where didst Thou know me?” And our Lord answered and said unto him, “Before Philip called thee, when thou wast under the fig tree I saw thee.” And Simon knew that in truth our Lord knew the things, which were hidden, and he said unto Him, “My Lord and my God.” And Simon did not set himself in opposition to Christ, like the chiefs of the Jews, who although they saw and heard what was great and stupendous, did not obey and submit to the righteous man. Now it is said concerning this saint, that when he was a young man he had a quarrel with another young man, a Gentile, in the desert, and that Simon smote him a blow, and killed him straightway, and that he buried him under a fig tree which he had in his house, and no one knew about it except our Savior. And it is also said concerning him that at the time of the slaughter of the babes [by Herod], his mother hid him in the market (or, bazaar), and hung him up in a tree which was in her house, and that she used to take him down and give him suck, and then hang him up again; and she continued to do this until the persecution of Herod died down. And she told him nothing whatsoever about this until he was fully grown up, and he never told any man what had happened unto him; and when [our Redeemer] revealed unto him the salvation which came to him by a miracle, Simon knew that He was the Son of God in truth, and that He knew hidden things and was informed about everything. And straightway he bowed before our Redeemer, and was obedient unto Him, and followed him from that day, and became one of the Twelve Apostles. And having received the gift of the Holy Spirit, the Paraclete, he talked the languages of all countries, and he knew divine mysteries. And he came to the town of Kuerja, and to the country of El-Bejah, where he entered into the darkness of the infidels, and lighted a portion thereof. And he converted many of the wise men and fools, and lighted them with the light of Christian baptism, and he made those who had been aforetime like ravening wolves to become like sheep. And he went to the city of the infidels, and to many [other] cities, and he went into the Island of Barantya, and preached therein. And the infidels seized him in every place, and they entreated him evilly, and tortured him severely with divers kinds of tortures. And God added to his power and strength when being tortured, and God performed great signs and wonders, and [as examples] of them he raised the dead, and [healed] those whose bones were decayed and dried up; and they asked him to baptize them with Christian baptism, and he baptized them. And he lived for many years after this, and he healed a leper at the time when he baptized him with Christian baptism. And after this the infidels seized him, and hung him up on a tree, and he received the perfect and glorious crown of martyrdom in the kingdom of the heavens. Salutation to Nathaniel.

And on this day also four hundred (sic) people became martyrs in the city of Denderah, in Upper Egypt. Towards the end of his reign Diocletian tortured them with divers severe tortures, and then they became martyrs through having their heads cut off.

And on this day also are commemorated Minas, the deacon, and anchorite, and Abba Hor, and Baklawaya. (Kalanteya) the martyrs, and Katinos, and his wife, of the company of Isidore. Salutation to the four hundred soldiers who became martyrs in the city of Bandara. Salutation to Newaya Krestos.