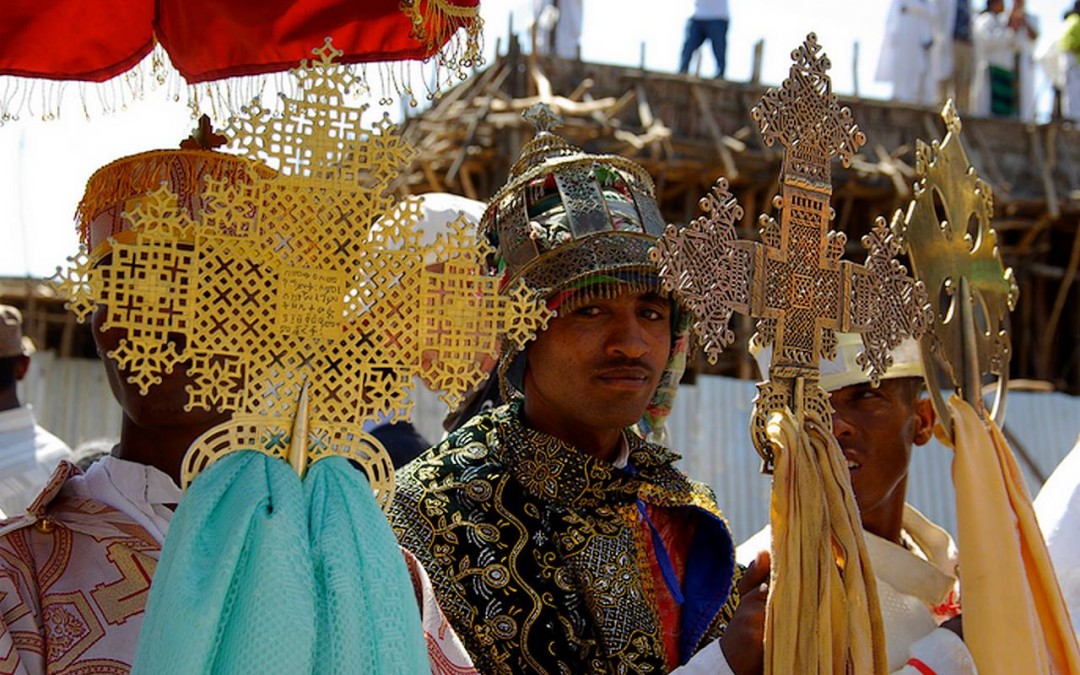 On this day died the holy father and fighter, Abba Isaac, the priest of the monasteries of Debre Macarius. This holy man sprang from one of the small hamlets about Mesr (Cairo), and his parents were poor [in the possessions of this world], but rich in good works, and they inherited the Country of the Living. When the holy elders, the monks, came to Mesr (Cairo) to sell the things, which they had made with their hands, [and were returning,] this saint followed them into the desert of Scete, and ministered unto them. And he served under the yoke of their authority, and became an ascetic, and fought the good fight. And he had no possessions whatsoever, not even a second change of apparel, during all the days of his life as a monk. And if men questioned him, and said unto him, “Why dost thou not obtain a change of apparel like our fathers?” he would answer and say unto them, “I have been a man of the people up to now, and when I was in the world I had not two changes of apparel.” And he would also say, “Our fathers wear apparel made of the hair of the camel; is not one set of garments more profitable to me?” And he was wont to weep very often, and if men asked him, and said unto him, “Why dost thou weep?” he would say unto them, “Because my parents died, and left me an orphan.” And for many years he continued to mix the ashes from the censers with the bread, which he ate at his table. One day he became sick of a grievous sickness, and one of the brethren brought him a little food, which had been prepared and cooked by fire, and he would not eat it. And when that brother had asked him many questions he said unto him, “This food is good and will cure thy sickness.” And Isaac answered, and said unto him, “Believe my, O my brother, I wish to remain sick with this sickness, for three years . . . “ And when he became old in days, and his excellences, and his righteous deeds, were many, the elders gathered together, and took counsel that they might make him a priest. And he fled from them, and went into the field where the crops were, and hid himself therein; and the elders went about seeking for him but could not find him. And when they had passed through the field, they sat down on the border of it to rest. Now they had with them a donkey, and that donkey went into the field, and stood still by the place where this father was, and when the elders came into the field to catch the donkey they found this father; and they seized him and wanted to bind him so that he might not flee from them. And he said unto them, “Henceforward I shall know that this is the Will of God.” And he went with them, and was made priest, and he added to the commands which were laid on the holy fathers, and he taught the young men good works, and he used to say to them, “Above everything possess ye submission and obedience, for these are the greatest of the virtues.” And when the time of his death drew nigh, the young men asked him to dwell in the desert that he might teach them what to do after he [had left them], and he answered and said unto them, “As long as ye see me working do ye work, if ye wish to strengthen the habit of dwelling in the desert. When our fathers died we sorrowed, but when we do even as they did, ye strengthen [our habit of] dwelling in the desert after them.” And having said these words he died in peace, and received the crown of praise from our Lord Jesus Christ. Salutation to Isaac the priest.

And on this day also eighty-five thousand and seven people became martyrs with Isidore.Salutation to these martyrs of the company of Isidore.

And on this day also is commemorated our great Abuna Egzi’e.
Glory be to God Who is glorified in His Saints. Amen.