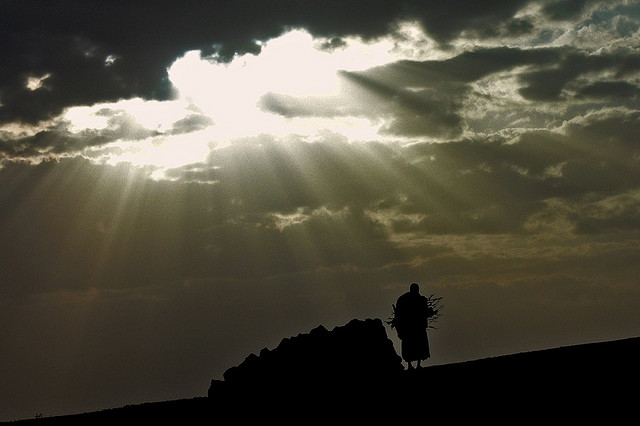 On this day all Christian communities celebrate the festival of the appearance in public of our holy Lady, the Virgin Mary, the God-bearer, in Debre Mitmak, as she was seated upon light, in a circle, in the church, which was built in her name. She was enveloped in divine light, and there were standing round about her all the hosts of the angels, and archangels, and their wings were extended and overshadowing her, and the Seraphim also were standing round about her with their censers, and they were censing her great majesty. And every time they bowed down to her they praised her, saying, “God the Father looked down from heaven upon earth and He found none like unto thee. He sent His Only Son, and He was born of thee.” And the martyrs came, mounted upon their horses, and they bowed before her, and Mar Saint George descended from his horse, and two others came and bowed before her, and he who came after [Saint George] was Saint Mercorios, mounted upon a black horse. After him all the martyrs came, and bowed down to her, and did homage to her, and she blessed them, and they returned. And there came also the company of the prophets, and the righteous, and they bowed down and did homage to her. And the children whom Herod slew also came lamenting before her, and they leaped up and embraced each other. And when those who were gathered together saw this, it filled them with joy and they thought they were in heaven. And if there was anyone whose father was dead, or his mother, or a kinsman, or a friend, and he asked her, saying, “O my holy Lady, thou Virgin Mary, thou God-bearer, show me so and so,” straightway she made that person to come in the form he had before [on earth]. And also when they threw down their stoles she took the one which she wished in her hands, and threw it back to them, and they divided it among the women a thing of blessing. And thus Christian and Armani (Pagan?) saw her for five days. And when they wished to go home to their own houses, they did homage to her and made an agreement with her, and she blessed them with her fingers. Salutation to him that looked upon thee, O Mary, as the eye of a daughter looketh at her mother.

And on this day also died Abba Aaron, the Syrian. This saint was a fighter from his youth, and at length the gifts of healing and working miracles were given unto him. When pilgrim monks came to him he used to cook for them young doves, and when they said unto him, “We do not eat flesh,” he would say words of blessing over the doves, and he dismissed them and they flew away. And he built a monastery, and the water was a long way off down the mountain, and he prayed a prayer, and made the sign of drawing it up with his hand, and so made the water to ascend. One day Satan came to him to destroy him with evil, and Abba Aaron, knowing the appearance of him by the grace of the Holy Spirit, which dwelt upon him, said unto him, “Come into this cave to dwell.” And when Satan had come into that cave, one side of it fell on him and buried him, and a huge stone leaped upon him, and Satan was put to shame. And also, when the governor of the city died, did not he raise him up by his prayer? And this father made a lion to carry four water-jars on his back, and the lion drew water for him for a period of ten years; and then he departed to God. Salutation to Aaron, who made young doves, which had been boiled, to fly away.
And on this day also are commemorated Amos, the prophet, and Mardali.