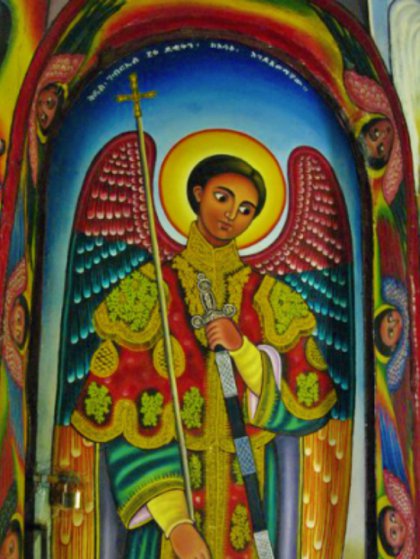 On this day died Saint Salome, the sister of our holy Lady, the Virgin Mary, the Godbearer.She was the daughter of Matata, the son of Levi, the son of Melki, the son of Aaron the priest; now Matata had three daughters; the name of the oldest was “Mary,” and the second was called “Sofia,” and the third was “Hanna.” Mary brought forth Salome, and Sofia brought forth Elisabeth, and Hannah brought forth our holy Lady, the Virgin Mary. And this Salome was brought up in the house of Joseph with our holy Lady, the Virgin Mary, and she ministered unto her, and she was not separated from her when our Redeemer was born. When Joseph was thinking about our holy Lady, the Virgin Mary, and wondering how she had brought forth her Son, being a virgin, this Saint Salome made bold to touch the seal of Mary’s virginity, and her fingers were burned by divine fire; but as soon as she touched the Child she was healed, [and her fingers] became as before. By this sign Joseph knew that our holy Lady, the Virgin Mary, was the God-bearer. When Herod commanded that the children of Bethlehem should be killed, she made the Child and Joseph and His mother, the Lady Mary, to take to flight, and she became a participator in the trouble caused by Him, sometimes carrying Him in her arms, and sometimes washing Him; and she ministered unto Him all His days–three and thirty years. On the day of His Passion she was not separated from Him, and she lamented and wept, and on the day of His Resurrection she saw Him before the Apostles saw Him. And even in the upper chamber of Zion the Holy Spirit came down upon her and the holy women, and she made many to believe on Him in the Faith of our Lord Jesus Christ; and she received from the Jews much derision and much enmity. Salutation to Salome.

And on this day also Saint Cotylus, a physician from the city of Antinoe, became a martyr. This saint had a God-fearing father, and his mother also feared God; and his father was governor of the city of Antinoe. He had no son, and he besought God frequently to give him one, and at length He gave him this saint; and he admonished him and taught him the Books of the Church. This saint was pure from his youth up, and he was an ascetic, and fought the spiritual fight; he prayed many prayers, and his rule was to pray one hundred prayers by night, and one hundred prayers by day. When he was grown up his parents wanted to see him married, but this he did not wish. They had a daughter, whom they had begotten after this holy man Cotylus, and they married her to Arianus, the governor of the city of Antinoe, who succeeded the father of this saint. Now when the father of Cotylus had waxed old in days, he asked the emperor and the emperor removed him from his office, and gave it to Arianus his son-in-law. And when his father died, Cotylus built a house wherein pilgrims were received, and then he learned the books of medicine, and became a physician; and all the sick folk came to him, and he healed them without payment. When Diocletian denied Christ, Arianus joined him in his denial, in order to keep his office, and he used to torture the martyrs. And this Saint Cotylus yearned to become a martyr, and he went to the governor’s Council, and cursed Arianus, and the emperor, and their gods, which were idols; but Arianus was not able to do him any harm because of his sister [who was his wife], but he sent him to the city of Behensa, where the saint remained in the prison house for three years. And Cotylus sent to his sister, and she delivered him from the prison house. After Arianus, another governor was appointed, and [Arianus] told him the story of this Saint Cotylus. And the governor sent and had him brought, and he was angry with him, and said unto him, “If thou wilt not cast incense to the gods I will torture thee with very great severity.” And the saint said unto him, “I will not cast incense to unclean idols, but only to my Lord Jesus Christ, the Son of the Living God.” And straightway the governor was wroth, and he commanded the soldiers to torture him with every kind of torture; but each time the angel of God came to him, comforted him, and strengthened him to endure, and He healed him and worked many signs and wonders by him. And when the governor was tired of torturing him, and Cotylus would not change his opinion, he commanded the soldiers to cut off his head, and they cut it off, and the saint received the crown of martyrdom in the kingdom of the heavens. Then the men of his house swathed him for burial, and they laid him in a beautiful shrine, and many great signs and wonders took place through his body therein. Salutation to Cotylus.

And on this day also are commemorated Saint Balanus, and ‘Alontran (Elantherius), and Romanus, and two hundred and fifty martyrs, and the Emperor Constantine, and his mother Helena.

And on this day our Lord planted pieces from Joseph’s rod in the place Bisos, and they grew and became trees.