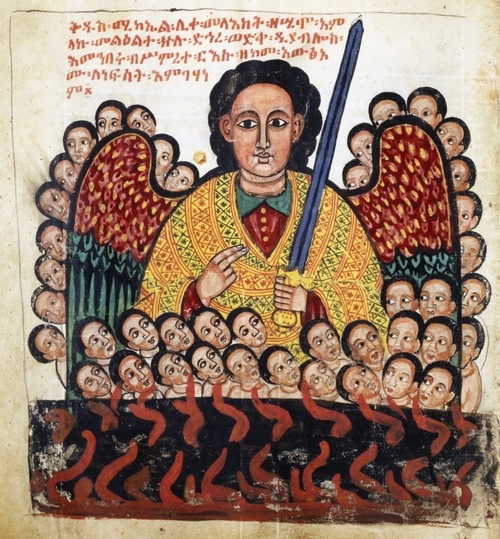 On this day died the holy father, Abba John, the thirtieth Archbishop of the city of Alexandria.  This saint was a Christian, and a good man, and he became a monk in his early years, and he fought a strenuous spiritual fight.  Then he shut himself up in a cell, but his knowledge and his excellence became noised abroad, and they seized him and made him Archbishop of Alexandria, and during the days of his office he composed many Homilies.  And God exalted the horn of the Church in the days of this father; now, the emperor who reigned in his days was Anastasius, a believer and a just man.  And Saint Abba Severus, Archbishop of the city of Antioch, wrote an epistle on the True Faith to this father Abba John, wherein he said, “Our Lord Christ, our God, after His union, is One Essence (or, being), without mixture, even according to the belief of our fathers Abba Cyril, and Abba Demetrius, and Abba Dioscoros.”  And Abba John and all his bishops received the letter, and thanked God and glorified Him because of the conversion of the members who were separated, and who had come into their proper places.  Then this father Abba John wrote an answer to this letter, with words full of the grace of the True Faith, concerning the unity of the Godhead of God, One Essence, and concerning the Incarnation of the Son of God in the nature of man, and how He is one with the Godhead, without separation, and without mingling, and without change, and that He is One and not Two.  And he anathematized all those who separate our Lord Christ, or who mix His natures.  And he anathematized all those who say that He Who suffered, and died, and was crucified for the children of men, was a mere man, or those who attribute suffering to the Divine Nature.  On the contrary, by the True Faith we know that it was God, the Word, Who suffered for us in the flesh, which He took from us.  And this is the path of the kingdom, and he who walketh therein shall never go astray, and never stumble.  And when Abba Severus read the Epistle of this Saint Abba John, he received it with great satisfaction and pleasure, and he read it publicly in the city of Antioch; and there were peace and agreement in the city of Alexandria concerning the True Faith.  And this father continued to teach the people and his flock for eleven years, and he admonished them, and protected them, and confirmed them in the True Faith, and he died in peace.  Salutation of John who shut himself in his cell, until they elected him Archbishop of Alexandria.

And on this day also died Lazarus, the just man, the brother of Mary and Martha, having been appointed Bishop of the city of Cyprus, after our Lord rose from the dead.  Our Lord suffered in that week, and this saint followed the Apostle from that time.  After the Holy Spirit, the Paraclete, had descended upon the Apostles, they laid their hands upon him, and made him Bishop of the city of Cyprus.  And he guarded his flock well, and he sat for forty years and died in peace.  Salutation to Lazarus.