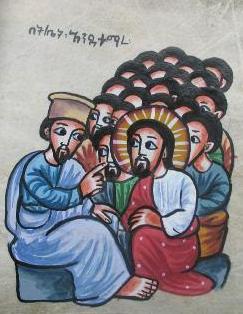 On this day Kerlos (Cyril) and his five and forty sons became martyrs.

[A certain Paul and his forty-five sons are according to the Bodleian MS. to be commemorated on the 28th day of Ginbot.]

And on this day also died Abba Macarius of the monastery of Abba Pachomius.  Abba Anthony, the archimandrite of that monastery, saith, “There came unto me certain monks, saying:  Behold the departure of Brother Mercorios draweth nigh.”  And I went to him so that I might receive his blessing, and I found him unconscious (?), but his soul was not separated from his body.  And we sat with him for three nights without eating.  And on the third day he came to himself, and he drew a breath, and opened his eyes.  When he saw me he said unto me, “Why have ye gathered together about me?”  And we talked about all his labors, and we asked him to tell us what he had seen, and he told us how an awe-inspiring man had come to him, and taken his soul, and had shown him the torture of sinners, and the reward of the righteous.  Then he lamented over his soul and turned his face downwards to the earth, and he said unto us, “Brethren, go ye into the abode of Abba George, of the desert of Harasit, for I heard the angel who was with me saying, ‘Take back Mercorios and bring George.’”  Now this George was always fighting the spiritual fight, in a little cave in the Desert of Salt, and at length his body shriveled up, and when the brethren went they found him dead; and they brought him to the monastery and buried him there.  And this brother had afflicted his body so heavily with ascetic labors that he became like dry wood.  And then he made an agreement with me that he should go to the desert, and he said unto me, “On the fourteenth day of the month of Nehasse, come to me and thou wilt find me.”  And on the day, which he had appointed to me I went to him, and I found him, and he said unto me, “I am going to die and to depart to my fathers.  And three oxen shall come to thee, and do thou lift my body on to their backs, and they shall lead thee to the monastery, by the Will of God, and bury me by my abode”; and it happened even as he said, and innumerable signs and wonders were made manifest at his tomb.

And on this day also died Saint Amette Christos, the woman who fought the spiritual fight, and rejected the world, and vanquished the carnal desire, even as Abba Daniel hath related unto us, saying:  When I was living in the desert of ‘Aaref, and was walking about at night by the light of the moon, I saw the figure of a man sitting on a hill, and his hair entirely covered his body.  And I said in my heart, I will go and see what this is, and I went close to the figure to look at it.  When it saw me it withdrew into a hollow of the rock, and straightway I knew that the figure was a man.  And I said unto him, “I entreat thee, O man of God, to come out so that I may receive thy blessing”; but he remained silent.  And I asked him to do so again and again, and then he said unto me, “Forgive me, O father, but I cannot come out.”  And I said unto him, “Why not?”  And he said unto me, “Because I am a woman, and I am naked.”  When I heard this I took off the garment, which I had about me and I threw it to her, and she put it on; and she came out and we prayed.  And I said unto her, “Tell me, O my mother, why thou hast come out here, and how thou didst find this hollow.”  And she said unto me, “I was a virgin in my father’s house, and I lived in Jerusalem, and there was a certain monk who visited me frequently and who held converse with me.  And after few days I went and lived with him.  And I saw him weeping, and confessing his sin before God; when I knocked he did not open to me, but he continued to weep and to repent.  When I heard him I said in my heart, ‘Why do I not weep and repent for my shame and disgrace?’  And I departed quickly to my house, and I put on sackcloth and I took a basket of beans and a vessel of water, and I prayed at the tomb of our Lord Jesus Christ, saying, ‘O mighty and powerful God, Who art everlastingly marvelous, Who dost save those who are destroyed, and dost raise up those who have fallen, and Who dost hearken unto those who cry unto Thee, send forth Thy compassion and Thy righteousness to save Thine handmaiden, who doth put her trust in Thee, and visit Thy wretched handmaiden, and accept my repentance, and bless this food and this vessel of water so that they may last me for the rest of my days, so that my thoughts about the salvation of my soul may not be brought to naught through my belly.’  And I went to Golgotha, and prayed this prayer, and I went forth and cast myself upon God, and I came to Jericho, and I went on until I reached the Red Sea.  Thence I came into this desert, and I found this hollow in the hill, and I said, ‘This is my habitation, which God hath prepared for me.’  And behold, for eight and thirty years I dwelt in this desert, and I have never seen any man save thyself.  And this basket of beans and this vessel of water whereon I live have neither become exhausted nor diminished during these eight and thirty years; my apparel became old and worn out, but this hollow hath taken the place of apparel, and become a covering for me; and neither the heat of the sun in summer nor the cold of the winter have troubled me all my days.”  After this she besought me to eat and to drink, and I ate from the basket, and I drank from the vessel, and their contents were not diminished, and I gave thanks to God.  I wanted to leave my garment with her, but she refused to accept it, saying, “Bring me a beautiful one.”  Then I went to the monastery, and told the abbot, and he cried out, saying, “He who hath two garments let him give one to him that hath none”; and they brought to him what he wanted.  And having taken them I departed straightway so that I might see Amatte Christos.  And I toiled very hard in searching for her, but I count not find her.  And after a few [days] certain old men came and said, “As we were journeying along the road of the Red Sea, in the Tanitic Desert, we saw a woman sitting by a rock towards eventide, and we ran so that we might be blessed by her, and she fled and withdrew into a cave, and we went close to the mouth of the cave but could not see her.  And we found a basket of beans and a vessel of water, and we ate, and the beans came to an end immediately.  And we stayed there all night until the morning, and we searched for the saint, so that we might be blessed by her, and we found her dead, and her hair covered her body.  And we bowed low, and buried her in the cave and covered her face with a stone, and we came away blessing God that He had thought us worthy to find her, and to bury the blessed saint.”  When I heard this I knew that she must be the woman whom I found.  And I told the old men what she had told, me, and they glorified God Who had helped the weak vessel to overcome the Enemy and all his fiends.  Salutation to ‘Amette Christos.

And on this day also the body of the holy and honorable Abba Epiphanius arrived in the city of Cyprus.  Now this saint died on the eighteenth (sic) day of the month of Genbot, whilst he was on the ship, and before he arrived at the city of Cyprus, according to what Saint John, the Mouth of Gold (i.e. Chrysostom), had prophesied concerning him, that is to say, that he would not reach his Episcopal throne [again].  And having died during the voyage, they carried him in the ship, and brought him to the city of Cyprus.  And the priests, and all the people, came with the Book of the Gospels, and crosses, and lamps, and censers, and incense, and hymns of praises, and psalms, and laments, and dirges, and they bore along the body of the pure saint, and finally laid it in the church.  And the priests wanted to dig a grave for him in the church, but two deacons, whom the saint had excommunicated some time before because of their evil work, opposed their wish, and prevented those who wished to dig a grave for him from doing so.  And the body remained in the church four days, and did not emit the odor which dead bodies are wont to emit, but it remained as if the saint were asleep.  And a certain holy deacon rose up, and said unto the holy body, “I know that thou enjoyest grace before God, and that thou art able to overcome all the evil men who oppose thee”; and then he seized the pick and smote the ground therewith.  And behold straightway the two wicked deacons fell upon their faces on the ground, and they were nigh to died; and men carried them into their houses, and they died on the third day.  And the priests swathed the body of the saint with beautiful and costly cloths, and they anointed it with divers sweet unguents, and they laid it in a noble stone coffin, and then they buried him in the church. And there appeared from out of his body great signs and miracles similar unto those, which he had been wont to perform before his death.  Salutation to the arrival of the body in the city of Cyprus, O Epiphanius.

And on this day also are commemorated Abba Senta, and ‘Agabos the martyrs.