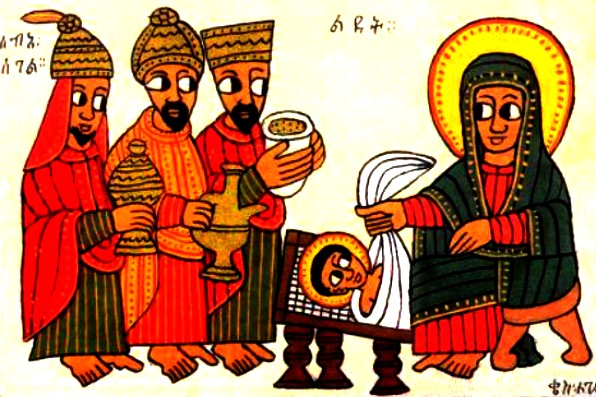 On this day is celebrated the festival of the Birth of our Lord and God and Redeemer, Jesus Christ; the sons of the Church celebrate it each month, and beg for mercy and forgiveness for their sins.  Salutation to Thy Birth, O our Lord.

And on this day also died the holy father Abba Simon, of the monastery of Antioch.  The name of the father of this saint was John, and the name of his mother was Martha, and through him signs and wonders took place.  Thus before his mother conceived him, Saint John the Baptist came to her in a dream, and told her about the birth of this John, and he revealed unto her what would happen to him.  And having been born, and his days being six years, Simon departed to the monastery of Antioch, and brought himself under the yoke of the monastic life; and he became an ascetic and fought a strenuous spiritual fight.  And the angels appeared unto him, when he was asleep, on several nights, and taught him how to fight the spiritual fight, even as they had taught Abba Pachomius.  And they revealed to this saint the work which cannot be destroyed, and the strife of the monastic life, and they gave him strength, and this saint fought a sublime and superhuman fight, for did not the angels bring unto him spiritual food at all times?  And after very great strife, he went up on a pillar [and lived there] for seven years, and then he went to a larger (higher?) pillar and stood on it for eight years.  Then he departed to a mountain and lived in it for twenty years inside [a house] of stones, which he made for himself, and he did not go outside it until the end of the twenty years. Then he went up on the top of a large (high?) pillar, and he stood up on the front of it for five and forty years; and all the days of his life were five and eighty years.  [He lived] in his father’s house for six years, and nine and seventy years he passed in the spiritual fight.  As for his miracles, who can describe them?  Now many of his miracles are written in the story of his strife.  And this father composed many Homilies, and Admonitions, and Sayings, which are profitable for the monastic life, and for the salvation of the soul; and he translated (or, expounded) many of the Books of the Church, and died in peace.  Salutation to Simon whose life, before he was conceived, was foretold by John the Baptist.

And on this day also are commemorated Abba ‘Afse, and Abba Guba, who were of the ninety saints of ‘Engelga, and Isaac, the monk, and the death of Alexander the king, the son of Philip.