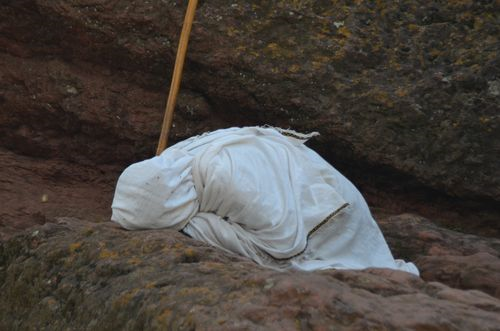 On this day died the holy father, Cyril, the pillar of the Faith, the lamp of the Holy Church, the twenty-fourth Archbishop of the city of Alexandria.  This saint was brought up by his mother’s brother, Theophilus, Archbishop of the city of Alexandria, his predecessor, and he sent him to the monastery of Saint Abba Macarius, and he learned from him all divine doctrine; in one year he learned by heart all the Holy Books.  And God gave him grace and intelligence to such a degree that when he had once read a book he knew it by heart.  And then the archbishop handed him over to the honorable father Abba Sarapamon, the bishop, and his wisdom and knowledge increased, and he learned how to do all good and honorable works.  And when he had finished learning all the good works, Abba Sarapamon sent him to Abba Theophilus, the archbishop, who rejoiced in him with a great joy, and thanked God Who had given him such a son.  And he gave him a place in the archiepiscopal palace to read the Scriptures to the people at all times.  And it came to pass that when he was reading the Scriptures no man wished him to hold his peace, because of the sweetness of his voice.  When Abba Theophilus died, they made this father Abba Cyril archbishop in his stead, and the church shone with his doctrine.  And when Nestorius, Archbishop of the city of Constantinople, denied God, a General Council of four (sic) hundred bishops assembled because of him in the city of Ephesus, in the days of the Emperor Theodosius.  And this father was the President of the Council, and he disputed with Nestorius, and resisted him successfully, and overcame him, and made manifest his denial of God.  And when Nestorius would not turn from [his error], Cyril cursed him, and excommunicated him, and drove him from his throne.  And this saint composed Twelve Discourses wherein he explained the True Faith, and after them he wrote many Homilies, and Admonitions, and “Characters,” which are in the hands of believers to the present day.  And this father affirmed that God, the Word, is One Nature, and One Being in His Incarnation, and he cursed all those who separated Christ, or who differed from this good opinion, and from this True Faith.  And having finished his good fight, and pleased God, he became a little sick, and died in peace after he had sat on the throne of Mark the evangelist for two and thirty years.  Salutation to Cyril.

Salutation to you, O Seraphim and Cherubim, who praise God ceaselessly.

Salutation to the Holy Angels.

And on this day also died the holy and honorable father, Abba Coelestinus, Archbishop of the city of Rome, who was the disciple of Yonaknidos (Innocentius), the archbishop, his predecessor.  At the time of his death the archbishop commanded that this father should succeed him as archbishop, and then he commanded him, saying, “Take good heed, O my son, for there are ravening wolves in the city of Rome.”  And when Yonakendis (Innocentius) died, they appointed this father Coelestinus archbishop in his stead.  Now Arsonius was Emperor of the city of Rome in those days.  And when Honorius died, Julian, the infidel, reined in his stead, and Julian, the infidel, wanted to appoint Nestorius Archbishop of Rome, and to expel this father Coelestinus, but the men of the city expelled Nestorius; and there was in the heart of that infidel emperor great vindictiveness against Saint Coelestinus.  And the saint went forth, and departed to a monastery, which was near Pentapolis, and he dwelt therein, and God wrought many signs and miracles by his hands.  And the Emperor Julian, the infidel, went forth to war.  And Raphael, the angel of God, appeared unto Saint Coelestinus in a vision of the night, and gave him [the salutation of] peace, and said unto him, “Rise up and depart to the city of Antioch to Saint Dimitrianus, the Archbishop of Antioch, and abide with him, for the emperor hath decided in his heart, if he returneth from the war, to kill thee.”  And when he woke up from his dream, he went forth from that monastery, and he had two brethren with him, and he came to the city of Antioch.  And he found Dimitrianus ill, and he told him everything, which had happened to the emperor; and Coelestinus tarried with him in one of the monasteries of the city of Antioch.  And Saint Ignatius, and Nakendinos (Innocentius), the Archbishop of the city of Rome, appeared before the Emperor Julian, the infidel.  And with them was one who was exceedingly awesome and terrifying, and he said unto him, “Why hast thou left the city of these men without an archbishop? Behold, God will remove thy soul from thee, and thou shalt die in the hands of thine enemies.”  And the emperor said unto him, “O my lord, what shall I do?”  And they answered and said unto him, “Dost thou believe in the Passion of the Son of God?” And he answered and said unto them, “I do believe.”  And they answered and said unto him, “Send and fetch our son Coelestinus, and restore him to his throne.”  When the emperor awoke from his dream he was afraid, and he wrote a letter, and sent it to Dimitrianus, saying, “Be not angry with me on account of Coelestinus.  Instruct my messengers and cause them to come to the place where he liveth, so that they may restore him to his office.”  And when the messengers of the emperor went they found Saint Coelestinus, and they restored him to the city of Rome with great honor, and the people welcomed him with great joy.  And in those days the emperor returned from the war victorious, and the Church was in a state of quietness and peace.  When Nestorius denied God, and the General Council assembled [to deal] with him, Coelestinus was unable to attend the Council, because of his illness, but he sent two priests, who carried an epistle wherein he cursed Nerstorius, and excommunicated him.  Now the emperor believed in the words of Nestorius, and would have nominated him [archbishop], but he was afraid of the archbishops.  And when God willed to give Coelestinus rest from the labor of this world Yonaknidos (Innocentius) and Athanasius appeared to him, and said unto him, “Direct the people, for behold, thou shalt come to us; our Lord Jesus Christ calleth thee.”  And when he woke up the commanded the people, and said unto them, “Take good heed to yourselves, for behold ravening wolves shall come into this city.”  And having said this he added, “Let us rise up and depart, for behold the saints are seeking for me and for two others, and we must go out from this world.”  And at that moment the two others were Cyril, Archbishop of Alexandria, and Lucius, Bishop of the city of San (Tanis); and having said this he died in peace.  Salutation to Coelestinus.