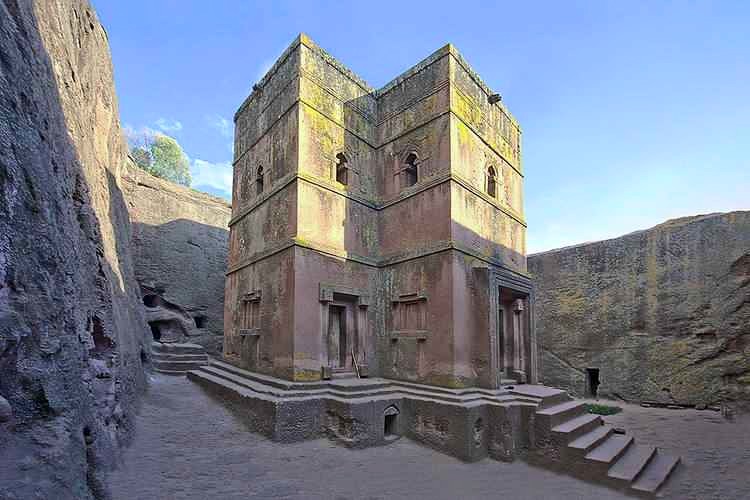 And on this day also ‘Aberokh and ‘Atom, his brother, became holy martyrs.  These saints were of the men of the city of Gamnudi, and their parents were believers, and God-fearing folk, who gave much alms; the name of their father was “John,” and that of their mother was “Mary.”  When their parents died they were grown-up men, and the days of ‘Aberokh were thirty years, and the days of ‘Atom were seven and twenty years. They were devoted in their attendance in the church, and they were perfect in all excellences, and in the practice of righteousness.  And at the time of the persecution, when many became martyrs, the saints rose up and departed to the city of Farima, in order to trade and gain money.  And they found there the soldiers of the king, who had with them the body of a certain learned priest who had been martyred, and whose name was Anianus.  And they gave the soldiers much money, and they took the body from the soldiers and brought it into their house, and they laid it in a fine stone coffer, and they hung up before it a lamp, which burned continually; and great signs and wonders took place through it.  And the saints meditated upon the end of this fleeting world, and upon the happy life of the kingdom of the heavens, and they agreed together and departed to the city of Alexandria, and confessed our Lord Jesus Christ before the governor of the city of Alexandria.  And he commanded the soldiers to torture them, and to beat them, and they beat them with whips of bulls’ hide until their blood ran down upon the ground.  Then they drove long sharp iron nails into their bodies, and lighted a fire under them, but God sent His angel who saved them from the fire.  And after this the governor commanded the soldiers to hang them up upon a high tree, with their feet in the air and their heads towards the ground, and they hung them up and at length their blood ran out of their nostrils and mouths; and the angel of God descended and delivered them from crucifixion.  And the governor commanded the soldiers to shut them up in prison, and after this he sent them to the city of Farma.  And when they stood before the governor he marveled exceedingly at their strength, and at the goodliness of their appearance, and he said unto them, “Cast incense to the gods,” but they hearkened not to his command, and refused to do his will.  And he mixed together salt, and dust of tiles, and pepper, and vinegar and poured them into their nostrils, and they endured patiently all this suffering.  And after this they stripped them and laid them on a bed of iron, and lighted a fire under them, and plucked out the nails of their hands and feet; and they beat them severely with iron rods upon their mouths.  Now at that time the wife of the governor died, and the king asked them to forgive him for the torture, which he had inflicted upon them, and to raise up for him his wife from the dead.  And the saints besought our Lord Jesus Christ, and he sent away the saints, and they departed to their city Gamnudi.  And they gave to the poor and needy what was left of their possessions, and they gave the body of Saint Anianus to a righteous man whose name was Sarabamon, and commanded him to keep the lamp burning continually before him as before; and then they went into the city of Sarabamon, and confessed our Lord Jesus Christ before the governor.  And he commanded the soldiers to beat them severely, and they dragged them all round the city, and their blood flowed upon the ground.  And a certain deaf and dumb woman came and took some of their blood, and she smeared it on her mouth and ears, and she heard and talked straightway.  And the governor commanded the soldiers to shut them up in prison, and they did so, and when he was tired of torturing them, he commanded them to cut off their heads, now Sarabamon was with them, and they cut off their heads and the saints received the crown of martyrdom in the kingdom of the heavens.  And Sarabamon took the bodies of the saints, and there were with him two other men from the city of Gamnudi, and they wrapped them up in fine linen, and in costly cloths, and they anointed them with sweet-smelling unguents, and carried them to their city Gamnudi.  And when they came to the outer part of the city the beasts that were drawing their bodies on a wagon stood still, and would not move, and although they beat them to make them go on they would not move.  And they heard a voice, which said, “This is the place which God hath chosen for our bodies to rest in”; and they laid the bodies there until they had built a church, and then they placed them inside it, together with the body of Saint Anianus, the physician.  And there they have remained until now in the city of Gamnudi, and many signs and wonders have appeared through them.  And Saint ‘Aberokh was very ruddy of countenance, and tall of stature, and the pupils of his eyes were blue like nil.  And Saint ‘Atom was tall of stature, and the color of the pupils of his eyes was like antimony, and his beard was black. And our Lord Jesus Christ promised them in the time of their tribulation that He would blot out the sins of everyone who should mention their names, or should celebrate their commemoration, to the best of his ability, and that he should never see the Judgment.  Salutation to ‘Aberokh and to his brother ‘Atom.

And on this day also Saint Abba Belane, of the city of Bari, which was on the border of the city of Saka, in Lower Egypt, became a martyr.  This saint was a priest, and when he heard of the tribulations of the believers, and the killing of the martyrs, he gave all his goods to the poor and needy, and went to the city of Antinoe, and confessed the Name of the Lord Jesus Christ before the governor.  And the governor tortured him with divers kind of severe tortures for many days, and he delivered up his soul into the hand of God and received the crown of martyrdom in the kingdom of the heavens.  Salutation to the blessed Bulana.

And on this day also became martyrs the company of Esdros (Isidore), and Peter, and his wife and son, and nine and forty of his servants.

And on this day also Abba Bima, from the city of Behensa in Upper Egypt, became a martyr.  This saint was a rich man, and a very good one, and a lover of the poor; and he was set over the city.  And he saw our Lord Jesus Christ in a vision, and He was shining with a light which was far brighter than that of the sun, and He embraced him and said unto him, “Rise up, and go to the governor, and confess My Name [before him], for behold a crown of joy is prepared for thee.”  And when he awoke from his dream he rose up and gave all his goods to the poor and needy, and then he went forth from the city of Behensa, and confessed the Lord Jesus Christ before the governor.  And when the governor knew that he was the prefect of the city, and the kenkelawos (i.e. Chancellor), he demanded from him the sacred moneys of the churches of his city, and said unto him, “Sacrifice to the gods.”  And the saint answered and said unto him, “Of sacred moneys there is nothing whatsoever left, and as for the worship of unclean idols I will neither submit to thee, nor obey them, for I worship the Lord Jesus Christ, the Son of the Living God, the Creator of heaven and of earth and of everything which is in them.”  And the governor was wroth with him, and commanded the soldiers to cut out his tongue with the sword, and they did so; but God restored to him his tongue whole and uninjured as it was at first.  And then they crushed him with iron implements, and nailed him upon a bed of iron, and lighted a fire under him, but God delivered him from his torture, and raised him up whole and uninjured.  Then the governor sent him to the city of Alexandria, and our Lord Jesus Christ appeared unto him and strengthened him.  And the governor cast him into prison where the saint worked great signs and wonders.  Now the sister of Julius, who was from the city of ‘Akfahas, was ridden by a devil, and the saint cast out the devil from her; and the report of the saint was heard in all the city, and many believed on our Lord Jesus Christ through him and became martyrs.  And the governor was wroth, and tortured him with divers kinds of tortures, and [broke him] on the wheel, and they plucked out the nails of his hands and feet, and they dragged him about in iron chains which had been made red-hot, and they cast him into the furnace of the public baths; and after this they hung a large stone about his neck and cast him into the river.  And God caused him to be delivered from all these tortures and raised him up sound and uninjured.  And then they cast him into the fire, but he was saved from it, and stood up and prayed.  And when the governor was tired of torturing him he sent him to Upper Egypt, where they tortured him and hung him up head downwards.  And then they cast him into a cauldron, and lighted a fire under him, and God appeared unto him and delivered him, and promised him that He would write in the Book of Life the name of every man who celebrated his commemoration, or who wrote the history of his fight, or who had it read.  And when the governor was tired of torturing him he commanded the soldiers to cut off his head, and they cut it off with the sword, and the saint received the crown of martyrdom in the kingdom of the heavens.  And the servants of Julius, who were from the city of ‘Akfahas, took the body of Abba Bima, and carried it to his city, and laid it in a good place until the end of the days of persecution.  And they built a fine church and a monastery and laid his body therein, and many signs and miracles took place through it.  And his body healeth to this day all the sick that come to it, and salute it in faith.  Salutation to Bayma.

And on this day also are commemorated the fifteen martyrs who suffered with Abba Nob.  [In the Bodleian MS. this paragraph is given under the ninth day.]