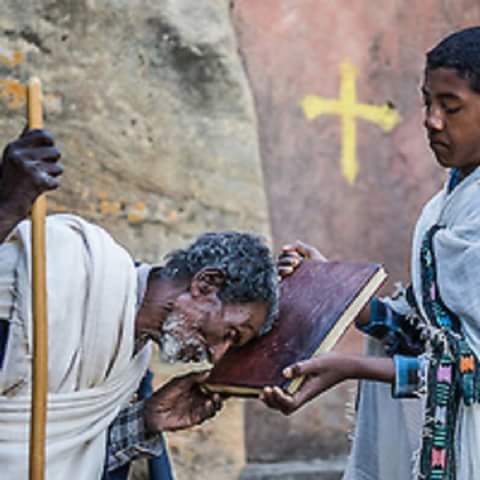 On this day Saint Theodore, Bishop of Five Cities (Pentapolis), became a martyr.  This saint lived when Diocletian the infidel worshipped idols, and when he sent out an Edict into all countries and commanded his officers to torture the Christians, and to destroy them by every kind of torture.  And he sent another governor, Falawes, to the city of Phrygia and the country round about.  And Theodore having come there, and seen the whole city, the people laid information against this saint before Diocletian, and accused him of being a teacher of the Christians.  Now this took place one year after Abba Theonas made him bishop.  And the governor had the saint brought before him, and commanded him to worship idols.  And the saint answered and said unto him, “It is not seemly for us to abandon God, the Creator of the heavens and the earth, and worship idols.”  And the governor answered and said unto him, “Is there any other god besides Artemis, and Apollo, and ‘Ardamida, and the other gods?  And are not these gods?” And the saint answered and said unto him, “These are not gods, and our Lord Jesus Christ is the Creator.”  And the governor was wroth at the firmness of his answer, and he commanded the soldiers to torture him.  And they continued to torture him for a space of forty (?) days, with beatings, and with crucifixions, and with the wheel, and with prison; but the saint feared not the torture nor was he obedient to the governor’s command.  And straightway the governor commanded the soldiers to cut off his head, and they cut it off with the sword, and he received the crown of martyrdom in the kingdom of the heavens.  Salutation to Theodore whom they tortured for forty days.

And on this day Saint Theodore, Bishop of the city of Corinth, and three women and the two governors, that is to say Lucianus and Dagnanius, who were torturing them, became martyrs.  And certain men having laid information before these two governors that this saint, the Bishop of Corinth, was a Christian, the governors had him brought before them, and they questioned him concerning his Faith, and he confessed that he was a Christian.  And they tortured him, and beat him with rods, and he stamped on the ground and kicked the throne of the idols and overturned them.  And the two governors were wroth, and they tortured him severely, and they rubbed his wounds with hairy rags which had been dipped in vinegar and salt, and meanwhile he cursed the idols and the governors.  And the governors commanded the soldiers and they cut out his tongue.  When they had cut it out, one of the believing women who were there took it away, and when the soldiers put the saint in prison, he took his tongue from that woman and laid it upon his belly, and his tongue extended itself, and entered his mouth. And a white dove came and flew round the saint, and then a peacock flew up and alighted on the window.  And the two governors saw them and marveled, and Lucianus believed on our Lord Jesus Christ.  And straightway Dagnanius was wroth, and he slew the three women who were walking behind the saint.  And when the saint delivered up his soul the dove and the peacock flew away, and departed straightway, and Dagnanius marveled exceedingly at this.  And Saint Lucianus informed him, saying, “The Faith of our Lord Jesus Christ is the True Faith” (?)’ and Dagnanius himself also believed on our Lord Jesus Christ.  And then they went by sea from the city of Corinth to the land of Cyprus, and there they found another governor who was torturing the Christians.  And Saint Lucianus stood up before the governor without the knowledge of Dagnanius, and he overturned the throne of the idols, and confessed our Lord Jesus Christ; and the soldiers cut off his head with the sword, and he received the crown of martyrdom.  And Dagnanius took him and made him ready for burial and buried him.  And after this Dagnanius stood up before the governor, and confessed our Lord Jesus Christ, and his head was cut off with the sword, and he received the crown of martyrdom in the kingdom of the heavens.  Salutation to Theodore, Bishop of Corinth, and to Lucianus and Dagnanius.

And on this day also died the holy father and fighter Abba Helyan (or, Golyan).  The name of the father of this saint was Justus, and the name of his mother was Kalmona, and his district (or, home) was ‘Ain Dahay; in his youth he was a worker in gold and silver, and was praised for his handiwork.  One day a woman from among the Arab handmaidens came to him, and asked him to make for her ornaments for her ears.  When he had finished them for her, he asked for payment from her, and she bowed her head before him, and said unto him, “If thou wantest from me what men want from women, behold me here before thee; other money I have none.”  When he heard this he said unto her, “Thou art the daughter of the governor of the Satans; get thee gone from me and never show me thy face again.”  And then he tarried a little while in his house reminding himself about death, and punishment, and the resurrection, and then he distributed his goods among the poor and needy.  And he made an agreement with his mother, and left her half of his money, and having taken food sufficient for three days he departed into the desert.  And when God saw the purity of his mind, He mad to be near to him what was afar off, and he came to the Red Sea in one day.  And whilst he was sleeping, there appeared unto him three men in white apparel, who held a cross which shone like the sun, and they woke him up and took him with them; and when they came to a garden they gave him a staff formed of a cross studded with gems.  Whilst they were in the garden they prayed together, and when he rose up after prostrating himself, he could not find any one of them; and he wept because of their separation from him.  And when his sojourn there had become long, he found that he was accustomed to the solitary life, and he fed himself upon green herbs, and drank water.  When he wanted to go by night into caves and other dark places, the staff of the cross gave him light, and brought near to him what was afar off; and his clothing was the bark of the trees.  And when Satan, the accursed, saw his spiritual fight, he went to certain evil men and spoke unto them, saying, “There is a treasure hidden in the desert, and if ye seize the man who guardeth it ye will find it”; and he took them and brought them to the passage across the river.  And when they had come to the river, they lost their way to the place where they should cross over, and although they saw the river they were unable to come there to drink, and they were exceedingly thirsty.  And again Satan transformed himself into a wild beast of terrifying aspect, and he went to Saint Helyan, and he said unto him, “Why dost thou not show compassion on thy companions who are thirsty, and why dost thou not give them water to drink?”  And he thought that by this means they would be able to seize him.  And the saint thought God was chiding him by the mouth of a wild beast, and he drew water for them and crossed the river, and gave them to drink.  And when they saw his wretched condition, they had pity upon him, and wanted to give him their apparel, but he would not take it from them, and he returned to his abode.  And Satan, having laid aside his cunning form of a wild beast, again transformed himself and took the form of a monk, and he came to the saint to lead him astray, but the saint made the sign of the Cross over him and Satan fled away ashamed.  When the time for the departure of the saint drew nigh, the three men who had appeared unto him before came to him, and wrote his history for him; and when he died they buried him.  Salutation to Helyan.

And on this day also are commemorated Mar Matra (MarMatra), and Andrew, Bishop of Kefala, and the consecration of a church to Sergius in Egypt.

And on this day also became martyrs Abba Esi and five and fifty men and four soldiers.