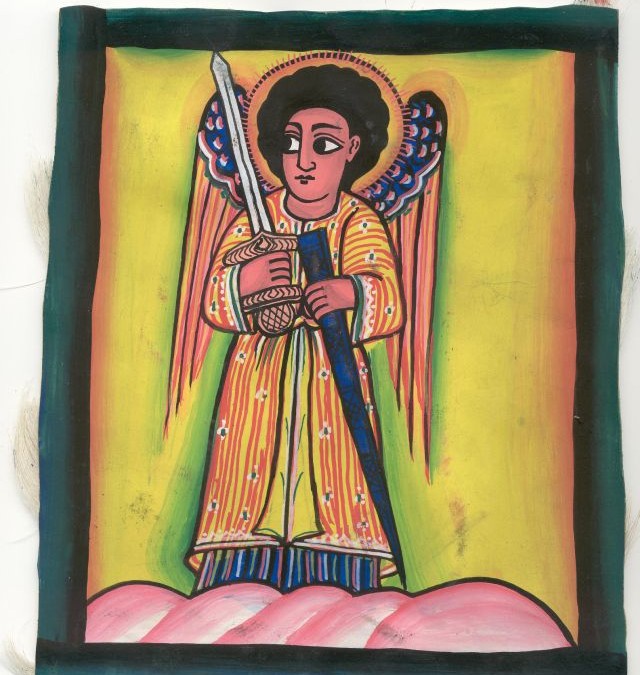 On this day is celebrated the commemorative festival of the glorious angel, the Archangel Michael, because of it God sent him to the army of Sanakrem, the King of Persia, and he slew eighteen ten-thousand thousands and fifty hundred men.  And having besieged Jerusalem, Sanakrem (Sennacherib) sent messengers to Hezekiah the king, who reviled him and blasphemed the Lord God, and he said unto them (i.e. the Jews), “Who can deliver you out of my hand?”  And Hezekiah, the King of Judah, was sad, and he put on hair sackcloth, and he entered the House of God, and prayed and bowed down before Him in the sanctuary, and entreated Him to save His people, and the city of Jerusalem.  And God accepted his petition, and He sent Saint Michael the Archangel to the army of Sanakrem (Sennacherib), King of Persia, and he performed a great miracle upon him, and delivered Jerusalem and all the people of Judah.  For this reason the Teachers of the Church have commanded the people to celebrate the festival of Saint Michael the Archangel this day.  Salutation to Michael the Archangel.

And on this day also Saint Abba Hor became a martyr.  This holy man was from the city of Seryas, and he had a sister whose father was a worker in metals; and he determined in his heart to become a martyr.  And he went to the city of Sarma, and confessed our Lord Jesus Christ before the governor, who tortured him severely.  And after this that governor and his wife and sons believed because they saw and heard of the miracles which God performed by the hands of this saint, and they became martyrs by the hands of another governor.  And the governor sent Abba Hor to the city of Antinoe, and the governor of that city tortured him with every kind of torture, and broke him on the wheel, and hung him up head downwards, and tortured him with red-hot irons.  And when he was tired of torturing him he commanded the soldiers to cut off his head, [and they did so,] and he received the crown of martyrdom in the kingdom of the heavens.  Salutation to Abba Hor.  Salutation to the company of Hor, one hundred and twenty-seven men and twenty women.