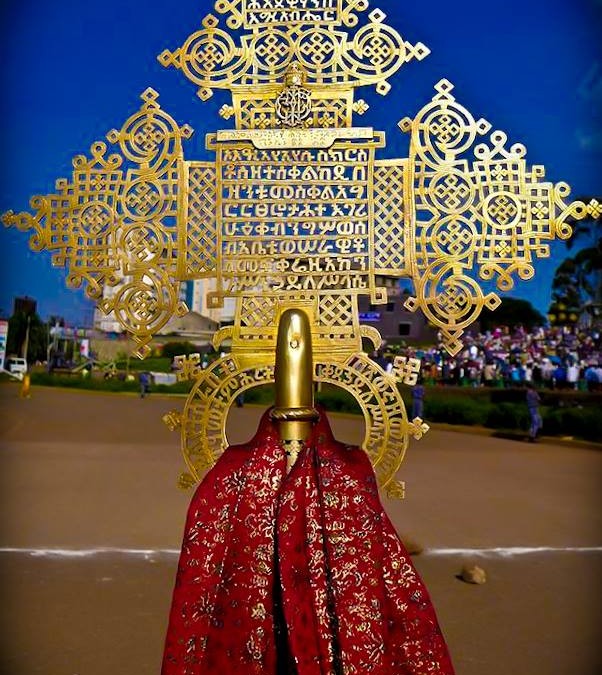 On this day died Saint Abba Ephraim, the Syrian.  This saint was a man from the city of Kawakebet, and his father was a priest of idols, and hated the worship of our Lord Jesus Christ.  And at that time Abba Ephraim departed to Saint Abba Jacob, Bishop of Nisibis, who admonished him, and taught him, and baptized him with Christian baptism; and he lived with him and fought a fight greater than that [usually] fought by men in his days; and he fasted frequently and prayed without ceasing.  And the grace of the Holy Spirit descended upon him, and he disputed with the people, and overcame them in argument.  And when the Council of the father Bishops, Three Hundred and Eighteen in number, assembled in the city of Nicea, this saint went with his teacher Abba Jacob to the Council of the Saints, and overcame Arius the infidel.  That night Abba Ephraim saw a pillar of light standing upon the earth, and it reached up to heaven, and when he saw it he marveled.  And a voice came to him from heaven, saying, “This pillar of light which thou seest is the blessed Basil, Bishop of the city of Caesarea”; and he longed to see him.  And Abba Ephraim departed to the city of Caesarea, and went into the church, and stood in a corner of it.  And he saw Saint Basil, as he went up to the throne to read the Holy Gospel, and he wore priestly vestments of gold, which were of great price, and he was in doubt about him; and God showed him a white dove on the head of this Saint Basil.  And Saint Basil knew that Abba Ephraim was standing in the corner of the church, and he sent and called him by his name, and Ephraim went to him, and they saluted each other through an interpreter.  And Abba Ephraim asked Abba Basil that they might talk together without an interpreter, and the grace of the Holy Spirit descended upon them, and each knew the language of the other.  And then Basil made Abba Ephraim a deacon, and after a few days he was made a priest, and many virtues appeared in him; and he fought a great fight.  And at that time there was a certain honorable woman of high rank who was ashamed to confess her sin openly to Saint Basil; and she wrote on paper a confession of all the sins which she had committed from her youth up to that day; and there remained one sin only which she did not set down in what she had written.  And then she brought the paper to Saint Basil, and she asked him before the people, saying, “I am a sinful woman.  And behold, I have written all my sins on this paper, and I ask thee to remit them so that they may be blotted out from this paper, it remaining sealed.”  And he took the paper, and prayed for her, and the paper became blank in every place, and all her sins were blotted out with the exception of the one sin, which was a very grievous one; and when she saw it she wept, and entreated him to remit to her the one sin, which remained.  And he said unto her, “Go thou to the desert, to Abba Ephraim, and he shall remit to thee this one remaining sin.”  And straightway she went to Abba Ephraim, and told him what had befallen her, and he said unto her, “Get thee quickly to Abba Basil before his departure from this world, for he is the chief-priest, and he must remit to thee thy sin.”  And the woman returned to Abba Basil, and she found that he had died whilst they were carrying him in his bed on the heads of the priests.  And she wept and laid the paper on the body of Abba Basil, so that he might blot out for her the sin, which remained on the paper; and the saint blotted it out by his prayer.  And Abba Ephraim performed many miracles.  And in his days there appeared a certain wicked denier [of Christ] whose name was Walda Didan, and this father disputed with him, and overcame him; and this father composed very many Homilies, and it is found written in the books that the number of the works which he composed by the Holy Spirit was one thousand four hundred Homilies and Admonitions.  And Abba Ephraim asked God, the Most High, saying, “O my Lord, take from me the waves of Thy grace.”  And having finished his good fight, he departed to God, Whom he loved.  Salutation to Ephraim.

And on this day also are commemorated Abba Kharayon of ‘Amsal, and Fremnatos, and five and forty martyrs, and the martyrdom of Cyriacus, (as it is written in the Synaxarium of Mesr), and Frumentius the monk and fighter, the pure man and worker of many miracles.