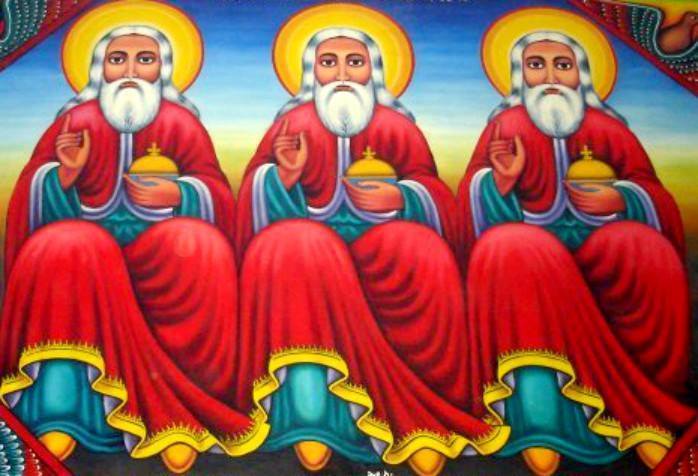 On this day James the apostle and martyr became Bishop of the city of Jerusalem.  This saint was the son of Joseph the carpenter, and he was the youngest of his sons; and he was a virgin, and chaste, and was called the “brother of our Lord” because he was brought up with our Lord when He was in the house of Joseph, even as Joseph was called his father.  And the holy apostles made him Bishop of the city of Jerusalem, and he preached and taught in the Name of our Lord Jesus Christ.  And he converted many to the True Faith, and baptized them with Christian baptism, and God performed great signs and wonders by his hands, among them being the following:  There was a certain man from the countries, and the apostle found him on the road and wished to go into his house, and on the road he discovered that this man was possessed of a devil.  And when the Satan saw Saint James, the apostle, he cried out and said, “What have I to do with thee, O Apostle of Christ?  Hast thou come hither to destroy me?”  And the holy apostle said unto him, “Stop thy mouth, O thou unclean spirit, and go forth from this man”; and because of this the Satan went forth from that man in the form of fire.  When the old man saw this wonderful thing he fell down at the feet of Saint James the Apostle and said, “I am unworthy that thou shouldst enter my house, but tell me what I must do, so that I, and all the men of my house, may be saved?”  And the holy apostle praised [God] because of that man, and he said, “In the Name of my Lord Jesus Christ I thank Thee, O Chief, that Thou hast made prosperous my way.”  And he turned to the man and spoke to him the words of his salvation, and he taught him the Name of our Lord Jesus Christ.  And the old man brought him into his house, and all the men of his house gathered together, and the apostle taught them the Faith, and he baptized them in the Name of the Father and the Son and the Holy Ghost; and he made them heirs in the Holy Mysteries, the Body of our Lord and His honorable Blood.   And when the people heard this they brought unto him every person who was sick, and he healed them all.  And he appointed over them priests and deacons, and he made the old man their bishop; and he gave them the Gospel of our Lord Jesus Christ; and then he went forth to travel through the countries.   And there was a certain woman who was barren, and she asked him to entreat God on her behalf, so that He might give her a son.  And he prayed over her, and she conceived and brought forth a son, and she called his name James.  And one day a great many Jews were gathered together about him, and they asked him to tell them about Jesus, and who He was, and they imagined that he would tell them that Jesus was his brother.  And Saint James went up upon a throne, and began to explain to them the Godhead of our Lord Jesus Christ, and he told them that He was equal with God the Father.  When they heard this they were wroth with him, and they dragged him down off the throne and beat him very severely.  And a certain man of their number came with a wooden bar wherewith clothes were washed, and he beat the apostle on his head, and he delivered up his soul.  And it is written concerning this saint that he never drank wine, that he never ate any flesh whatsoever wherein was its blood, that a razor never went up on his head, that he never washed in the [public] bath, that he never wore clothes, but always wore a linen loin-cloth, and that he stood up so long, and made so many prostrations, that his feet and knees, and hands became swelled.  When he died they buried him by the side of the Sanctuary.  Salutation to James.

And on this day also the blessed Athanasius, of the country of Clysma, became a martyr in the days of Diocletian and Maximianus.  This blessed man was a kinsman of kings, and he was strong in the Faith of Christ.  And when these wicked emperors commanded the people to worship idols, they appointed this Athanasius to be governor of the land of Egypt, and ordered him to destroy the churches.  And when he arrived he went to the Archbishop, Abba Peter the martyr, and received his blessing, and told him that he was a Christian, and he rejoiced in him.  When the emperor heard of this he sent an officer to seize Athanasius, and to enquire into his doings.  And when the officer came he said unto him, “Why didst thou forsake the love of the gods?”  And Athanasius said unto him, “From my youth up I have been a lover of Christ, and I have not forsaken my Faith.”  And the officer said unto him, “If thou dost not turn from thy Faith thou wilt be tortured.  Dost thou not know that all those who transgress the command of the emperor receive severe beatings and are tortured with cruel severity?”  And Saint Athanasius said unto him, “O foolish man, wait a little until thou seest the punishment that is for ever which shall come upon thee, and upon thy emperor, and upon thy father Satan, the Enemy of God.”  When the officer heard this he was exceedingly wroth, and he commanded his soldiers to cut off his head with the sword.  And when Saint Athanasius heard this, he prayed to God that He would give his soul rest with His saints, and that He would remove tribulation and persecution from the Church, and that He would make strong the Empire of Rome, and the kingdom of ‘Aksum.  And when he had finished his prayer, he knelt down on his knees, and a soldier cut off his head with the sword, and miracles without number took place through his body.  Salutation to Athanasius.

And on this day also are commemorated Edrona (Endoran), and Tobia, and nine thousand soldiers of Antioch of the company of Isidore, and Andronicus, the governor, and his army.