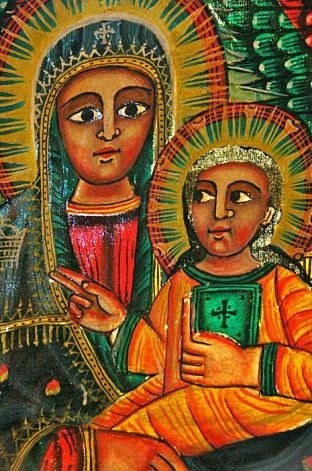 On this day is celebrated a festival in honor of our Lady, Saint Mary the Virgin, the God-bearer.  Salutation to thee, O Mary.

And on this day also died Saint Susenius, the eunuch.  This saint was one of the officers of the Emperor Theodosius, and grace and wisdom were upon him, and his compassion was great, and his acquaintance could be made by all men.  He visited all those who were sick, and comforted them, and he enquired into their tribulations and helped them.  And when one hundred bishops assembled for the Second Council of Ephesus because of Nestorius, Abba Cyril, Archbishop of the city of Alexandria, came, and this saint ministered unto him and all his bishops, and provided for them.  At that time he fell sick of a grievous sickness, and he saw a vision as it were of some one calling him to the Great Marriage Feast, and he told Saint Abba Cyril what he had seen.  And Abba Cyril said unto him, “Dost thou wish me to ask my Lord Jesus Christ to heal thee of thy sickness?”  And he answered and said unto him, “Yea, until I can give my possessions to the poor.”  And Abba Cyril prayed for him, and he recovered from his sickness, and he rose up and gave all his possessions to the poor and needy, and then he lay down and died in peace.  And Saint Abba Cyril prayed over him, and he prepared him for burial, and buried him, and commanded the people to celebrate a festival of commemoration on the day of his death, which is the twenty-first day of the month of Hamle.  Salutation to Susenius.

Salutation to the birth of Eustathius.

And on this day also died the blessed Lawa-Christos.  This saint was a man in the world, and when he married a wife he lived with her in virginity, and served God with fasting, and with prayer; and at nighttime they put on sackcloth, and each slept alone.  In the daytime he used to go about in the desert watching sheep, and she used to prepare a table for strangers and pilgrims; and in the evening he washed their feet, and she ministered to them at table and brought their food.  And then they asked God to reveal to certain perfect monks what manner of work theirs was, and a voice came unto them from heaven, saying, [to the monks] “Your fight hath not been as great as that of Lawa-Christos and his wife.”  And when those monks had gone to them, they enquired into their works, and with great difficulty the saint told them; and the monks departed wondering.  And leading this life of fighting Lawa-Christos and his wife died.  Salutation to Lawa-Christos and his wife.