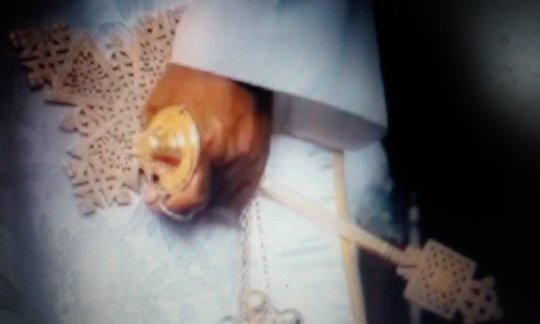 On this day Saint Macarius, the son of Saint Basilides, the general and martyr, became a martyr.  When information had been laid before Diocletian that this saint would not worship idols, the emperor wrote and ordered the governor to send him to the city of Alexandria.  And Macarius embraced his parents, and commanded them to take care of the poor and the needy, and went forth with the letter of the emperor.  And our Lord Jesus Christ appeared unto him in a vision and gave him strength to endure, and He informed him what should happen into him.  And when he arrived in the city of Alexandria, and stood up before Hermanus the governor, Hermanus knew that he was the son of Basilides the general, and he persuaded him earnestly, and besought him to turn from his counsel; but he would neither submit, nor turn from his good counsel, and the governor tortured him severely, with divers kinds of tortures.  And whilst Macarius was undergoing torture his soul (or, mind) was caught up, and God showed him the habitation of the saints, and the habitation of his father and brother.  And after this the governor sent him to the city of Nikyos, and there the governor tortured him severely.  And they cut out his tongue, and hacked off his arms, and they thrust red-hot iron goads into his sides; but God gave him the strength to endure this, and He raised him up whole and uninjured.  And God performed many signs and wonders by his hands, and among them are the following:  Certain men passed before him carrying a dead man whom they were going to bury, and whilst all the people were watching him Saint Macarius made entreaty to our Lord Jesus Christ on behalf of the dead man, and prayed Him to make manifest His praise on him; and then he prayed and the dead man rose up and told the people what he had seen.  And he said unto them, “Christ is the Lord of the Universe,” and when they heard this many of the people believed on our Lord Jesus Christ; and the soldiers cut off their heads with the sword, and they received the crown of martyrdom.  Now Arianus, the governor of Antinoe, dwelt there, and when he returned he took Saint Macarius with him.  And when they arrived at the city of Setnuf the ship stood still (i.e. ran aground), and could not be moved; and when they arrived at the city of Antinoe our Lord appeared unto Saint Macarius in a vision and said unto him, “In this place thy fight shall finish, and in it shall thy body lie.”  And the governor commanded the soldiers to put Saint Macarius upon the rack, and they did so, and then they cut off his head, and he finished his fight, and received the crown of martyrdom in the kingdom on the heavens.  And when Constantine reigned there was appointed by him a governor, whose name was Eulogius, a believer, and he commanded them to open the churches, and to build up those that were ruined, and to destroy the houses of idols.  And Saint Macarius appeared unto him in the night and informed him concerning the place wherein was his body.  Then Eulogius rose up, and came to that place, and found the body of the saint; and he took it away from there, and they built a church for it and laid it therein, and great signs and miracles took place through it.  Salutation to Macarius.

And on this day also the holy and honorable Leontius became a martyr.  This saint became a Christian through his father, who was a soldier in the army of the infidel emperor, and was a man of the city of Trablos.  He was exceedingly godly in appearance, and was perfect in his fight, and he read the Divine Books continually, and learned many of them by heart, specially the Psalms of David, which he used to recite frequently, and for this reason he knew them by heart.  He admonished his fellow-soldiers constantly, and he taught them the fear of God, and he encouraged them and said unto them, “Waste not your years in the service of idols.”  And there were some who submitted to his words, and turned away from their infidelity, and forsook their error, and the unclean iniquity wherein they had been living hitherto; and there were others into whom Satan entered, and they went to their general, and said unto him, “Leontius holdeth idols in contempt, and he teacheth and saith that Christ is God, the Creator of the heavens and the earth, and of all that is therein.”  And the governor had Leontius brought, and he questioned him, concerning this matter, and Leontius confessed our Lord Jesus Christ before the governor, even as Paul the apostle saith, “Who shall separate me from the love of Christ my God, Whom I have served, and worshipped, from my youth up?”  (Romans viii, 35).  And the governor was wroth, and commanded the soldiers to bind him hand and foot, and cast him into the prison house; and they did even as the governor commanded.  And on the following day the governor had him brought before him, and he said unto him, “By what power dost thou presume to transgress the edict of the emperor and dost turn men from the worship of the gods?”  And the saint answered and said unto him, “In truth I would that all men would enter into the Faith of our Lord Jesus Christ.  If thou wilt forsake thine error, and the service of idols, and wilt worship our Lord and God and Redeemer Jesus Christ, thou shalt inherit an everlasting kingdom”; and then he cursed the gods of the governor and his unclean idols.  And the soldiers beat him severely, until his blood ran down upon the ground, and all the while they were torturing him he glorified God and sang his praises.  And one of the soldiers was sorry for him, and he whispered in his ear, and said unto him, “I am sorry for thee.  Have pity on thy youth and speak only one word, and tell the governor that thou wilt sacrifice to the gods, and I will undertake to set thee free.”  And the saint cursed him, and thrust him away from him, saying, “Get thee from me, Satan!”  And when the governor saw his endurance, and his fortitude, he doubled his torture; and at length his body was cut into strips and his blood poured on the ground.  Then the governor commanded them to drown him in the river, or to drag him by the feet and cast him into prison until he could decide what to do with him; and when they had done these things to him he died in prison.  And a certain woman who was a believer came and gave the keepers of the prison house and the soldiers much money, and she took the saint and wrapped him up in new and costly cloths, and she made a covering worked with gold to spread over his bier, and she laid him in a coffin in the house, and had a picture of him painted upon it; and she hung before it a lamp which burned continually.  Salutation to Leontius, the lamp of Trablos.

And on this day also is commemorated Saint Markolos (Marcellus).