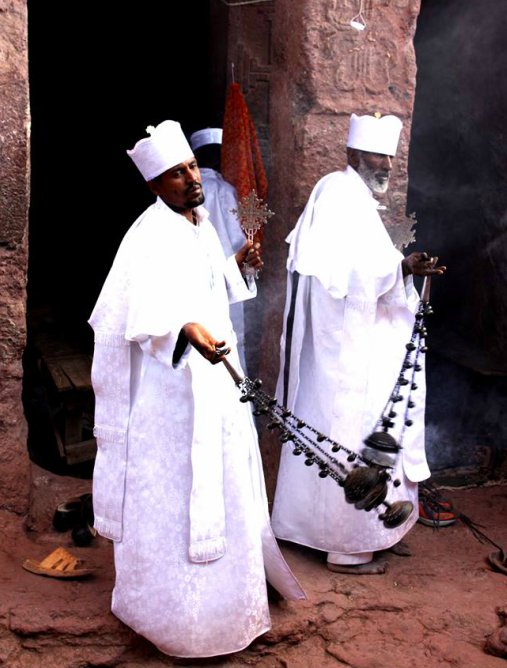 On this day the holy woman Marina became a martyr.  The name of the father of this saint was Decius, high priest of the gods of the city of Antioch; now at that time Decius was emperor.  And when Saint Marina was five years old her mother died, and her father committed her to a nurse so that she might live outside the city; now this nurse was a Christian, and she taught Marina all the Faith of Christ.  And when Marina reached the age of fifteen years, her father died.  One day she heard her nurse talking about the labors and fights of the martyrs, and the love of Christ entered her heart, and she went about seeking to become a martyr.  And a wicked governor came to this city, and as soon as he saw her he commanded the soldiers to bring her before him, and he said unto her, “Whence art thou?  What is thy name?”  And she said, “I am one of the people of Jesus Christ, and my name is Marina.”  When the governor saw her grace and her beauty, he could not restrain himself, and he persuaded her with many words to consent to his wish.  When she cursed him, and reviled his gods, he commanded the soldiers to beat her with iron rods, and to cut off her limbs, and to scrape her body until her blood flowed like water, and he also commanded them to scrape her members with an iron scraper, [and they did so]; but when Saint Marina prayed to God, Michael the Archangel came and healed her.  And the governor commanded them to take her into a prison house, which was filled with darkness, and whilst she was praying the Archangel Michael came, and lighted up the prison house, and took her up into heaven, where he showed her the dwelling of the saints and the righteous, and then he brought her back to her place.  And on the following day the governor commanded the soldiers to scrape her with an iron scraper, and to slit her body with butchers’ knives, and to cast her into prison; and Saint Michael came and healed her.  And whilst she was standing up praying, a huge and most terrifying serpent came forth from this prison, and when she saw it she was frightened and her whole body trembled, and she could not speak.  And the serpent swallowed her up, her hands being extended in the form of a cross, and she was praying in her heart.  Thereupon the belly of the serpent was split open, and Marina went forth from him uninjured, and she gave thanks to God.  And when she turned towards the prison house, she saw Satan seated, and he was in the form of a black man, with his hands clutching his knees.  And having made the sign of the Cross over her face, she seized him by the hair of his head, and beat him with a rod severely.  And then there was revealed unto her the wood of the Cross of Jesus Christ, and a white dove was sitting upon it, and it spoke, saying, “Rejoice, O Marina, for there is committed to thee the pledge of the grace of the Holy Spirit.”  And on the following day the governor commanded the soldiers to strip her naked, and to hang her up, head downwards, and to burn her body with fire, and to cast her into a cauldron of boiling water; [and they did so].  And as she was standing up in the cauldron and praying, a dove came down from heaven, and he had in his beak a crown of gold, and he loosed her fetters, and dipped her in the water thrice, in the Name of the Father and the Son and the Holy Spirit; and she went forth from the water praising God.  And when the governor saw that she was still alive he commanded them to cut off her head with the sword.  And when she had come into the place of martyrdom she prayed to God that He would receive her soul in peace.  And our Lord Jesus Christ came unto her, and gave her a promise that He would forgive the sins of everyone who should call upon her name, or write the history of her strife, or have it read, or should hear it read; and then the soldiers cut off her head with the sword.  And many miracles became manifest [through her], the blind saw, the lame walked, the deaf heard, and the dumb spoke; and countless folk believed on our Lord Jesus Christ.  Salutation to Marina.

And on this day also Saint Longinus became a martyr.  This saint came from the country of Cappadocia, but by race he was a Greek.  And when Tiberius Caesar reigned, he appointed Pilate governor of the land of Judah, and he gave this Saint Longinus to him among his other soldiers.  And when the time arrived, and the Lord wished to suffer for the salvation of His people, He permitted the wicked Jews to perform this thing.  When they had made themselves ready for this deed, this Longinus was one of the soldiers whom Pilate commanded to crucify our Lord.  And because of this the Jews gave him much money, and he worked and did the will of the Jews, and he pierced our Lord with a spear after He had delivered up His soul, and blood and water flowed from His side.  And when this saint saw this he marveled exceedingly.  And when, at the time of the Crucifixion, he saw that the sun became dark, and that the moon became like blood, and that the curtain of the Temple was rent, and that the rocks were split open, and that the dead rose up, his wonder was greatly increased; now he had heard and seen the miracles which our Lord performed from His Birth to His Crucifixion.  And when the righteous Joseph took the body of our Lord and Redeemer, and laid it in the cave, this saint was standing there with the guards when they sealed the tomb.  And when our Lord rose, the tomb being sealed, this Longinus was dismayed, and he asked God to explain to him this mystery.  And our Lord sent unto him the Apostle Peter, and he found him on the day of the Resurrection of our Lord.  And Longinus asked the Apostle Peter, and adjured him to tell him the whole history of the Redeemer; and the Apostle Peter told him everything, which had been prophesied concerning our Redeemer, and how He was the Son of the Living God.  And this saint believed through the Apostle Peter, and he abandoned the service of an earthly king, and departed to the country of Cappadocia, and he preached therein in the Name of our Lord Jesus Christ, like the Apostles.  When Pilate heard about this he was exceedingly wroth, and sent and reported him to Tiberius, and the emperor had him brought and tortured him and cut off his head with the sword; and the saint received the crown of martyrdom in the kingdom of the heavens.  Salutation to Longinus.

And on this day also Saint ‘Abtlemanos (Ptolemy), of Shoka, became a martyr.