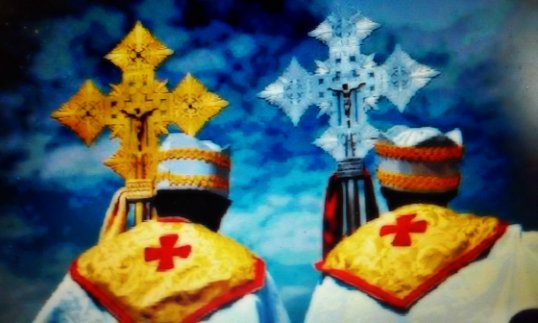 On this day died at a good old age the righteous man Joseph, the carpenter, who was worthy to be called the father of Christ in the flesh, and concerning whom the Holy Gospel beareth witness that he was a righteous man, and that, because of this, our Lady Saint Mary was in safe keeping with him.  And he finished his fight, and his course, and his toil, and his journey, together with our Lady Mary and our Lord Jesus Christ, in his coming to Bethlehem, and [his] flight to the country of Egypt.  On his return from the country of Egypt there came [upon him] tribulation from the Jews.  And when the time came for him to depart from this transient world to the world of the Living, [he called to him] his other sons, that is to say, Justus, and Judah, and Josa, and Jacob, and his three daughters, and he gave them commandments and embraced them, and stretched out his hands and delivered up his soul into the hand of God, and inherited everlasting life.  And all the days of his life were one hundred and fourteen years; he lived before his marriage forty years, and after his marriage fifty-two years, and after his wife died, nineteen years, and three years before the Incarnation of our Redeemer.  And our Lord Jesus Christ came to him at the time of his death, and laid His hand upon his eyes and wept over him, and He bestowed upon his body the gracious gift of never growing old, and upon his bones the gift of incorruptibility.  And they laid him in the grave of Jacob, his father, in the tenth year of the Incarnation of our Lord Jesus Christ.  Salutation to Joseph and Mary.

And on this day also died the holy father, Abba Timothy, the twenty-second Archbishop of the city of Alexandria.  This saint was the brother of the Archbishop Saint Peter his predecessor, and having been appointed he shepherded the rational flock of Christ and guarded them from the wolves Arius, and Macedonius, and Sabelius.  In the sixth year of the archiepiscopate of this saint the Emperor Theodosius the Great [began to] reign over the Christian people.  In that year also took place the General Council whereat One hundred and Fifty bishops gathered together in the city of Constantinople on account of Macedonius, who had denied the Holy Spirit; and this father was president of the Council.  Now Saint Damalius, Archbishop of the city of Rome, did not come to the Council because of his illness, but he sent priests in his place.  And this holy father Timothy disputed with Macedonius, who denied the Holy Ghost, and with Sabelius and with Apollinarius, and he overcame them, and put them to shame.  And behold, we have described their denial, and how this saint disputed with them, [in the section of this work] relating to the days of the assembling of this Council, which is the first day of the month of Yekatit.  And during the archiepiscopate of this saint, he took great care concerning the buildings of the churches, and he built many churches in the city of Alexandria and outside it, and he repaired and restored many of them; and he built many cells for the churches (?), and for the pilgrims.  And he was teaching his flock much doctrine continually, and by means of his great knowledge he strengthened them in the True Faith, and by the sweetness of his voice and his reading.  And he converted many of the followers of Arius and Macedonius, and brought them into the True Faith of our Lord Jesus Christ.  And he sat upon the throne of Mark the evangelist for nine years and a half, and he died in peace.  Salutation to Timothy the archbishop, brother of Peter the archbishop.

And on this day also died Abba Selama, the Revealer of the Light, the Bishop of Ethiopia; now his history is as follows:  A certain man from the country of the Greeks, a master of learning, whose name was Merpes, came wishing to see the country of Ethiopia, and he had with him two youths of his family, and the name of one was Fremnatos (Frumentius), and that of the other was “Adesyos (Aedesius)”; now there are some who call him “Sidrakos.”  And he arrived in a ship at the shore of the Sea of Ethiopia, and he saw all the beautiful things, which his heart desired, and as he was wishing to return to his country, enemies rose up against him and killed him, and all those who were with him.  And these two youths were left [alive], and the men of the city made them captives, and taught them the work of war, and took them as a present to the King of ‘Aksum whose name was “Alameda.”  And the king made Adyos director of his household, and Fremnatos, keeper of the Laws and Archives of “Aksum; and after a few days the king died, and left a little son with his mother, and the ‘Azgaga reigned with him.  And ‘Adesyos and Fremnatos brought up the children, and taught them little by little the Faith of Christ, and they built for them a place of prayer, and they gathered together to it the children and they taught them psalms and hymns.  And when they had brought the boy to the stage of early manhood, they asked him to dismiss them to their native country; and Adyoses departed to the country of Tyre to see his kinsfolk, and Fremnatos departed to Alexandria, to the Archbishop Athanasius, and he found that he had been restored to his office.  And he related everything, which had happened unto him because of their Faith in the country of Ethiopia, and how the people believed on Christ, but had neither bishops nor priests.  And then Abba Athanasius appointed Fremnatos Bishop of the country of Ethiopia, and sent him away with great honor.  And he arrived in the country of Ethiopia during the reign of ‘Abreha and ‘Asbeha, and he preached the peace of Christ in all the regions thereof, and because of this he was called “Abba Selama.”  And after he had saluted the men of Ethiopia he died in peace.  Salutation, salutation, I say, with joyful voice to Abba Selama.

And on this day also is commemorated the blessed Saint Abba Roys.

Salutation to Samuel and Zacharias.