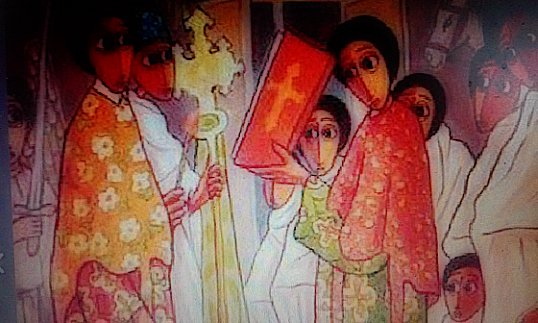 On this day Saint Abba Ammon, of the city of Tarnut, became a martyr.  This saint came to Upper Egypt, and he saw the tortures, which were being inflicted upon the holy martyrs, and he went to Arianus, the governor of Antinoe, and confessed our Lord Jesus Christ before him.  And Arianus tortured him severely, and beat him, and hanged him, and cut gashes in all his body, and drove long, sharp nails through his body; and our Lord Jesus Christ gave him strength, and healed his wounds, and raised him up from the punishment, whole and uninjured.  And after this Arianus sent him to the city of Alexandria.  And our Lord Jesus Christ appeared unto him, and strengthened him, and promised him, saying, “Whosoever shall celebrate thy commemoration, or shall write [a copy of] the book of thy fight, or shall cause it to be read, or shall give bread and water to the poor on the day of thy commemoration, I will blot out their sins and write their names in the Book of Life in the kingdom of the heavens”; and having said this unto him our Lord Jesus Christ went up into heaven with glory.  And Saint Abba Ammon rejoiced with great joy.  And then the governor tortured him very severely, and very many men believed through him and became martyrs.  And among them was a certain young woman, a virgin, whose name was Theophila, and she came and stood up before the governor, and cursed him and his idols, and she confessed our Lord Jesus Christ.  And the governor commanded the soldiers to cast her into the fire, but God delivered her from the fire; and they cut off her head with the sword, and she received the crown of martyrdom in the kingdom of the heavens.  Then the governor tortured Abba Ammon with great severity, and he mutilated him, and after this he commanded the soldiers to cut off his head with the sword; [and they did so,] and he received the crown of martyrdom in the kingdom of the heavens.  And many signs and miracles, and great healings of the sick, took place through his body.  Salutation to Ammon.

And on this day also are commemorated the vision which Ezekiel the prophet saw; and the dedication of the church of Saint John the evangelist in the city of Alexandria, and the honorable father Abba Simon, Archbishop of the city of Alexandria, that is to say, the translation of his body to the monastery of Abba Macarius of the desert of Scete; and the death of Seth, the son of Adam.  Salutation to the translation of thy body, O Simon.  Salutation to the vision of Ezekiel.