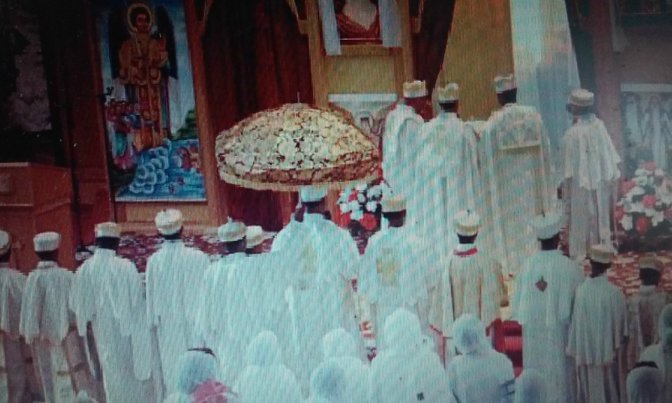 And on this day also are commemorated Andronicus and his wife Athanasia, the lovers of God.  They came from the city of Antioch.  They were rich in gold and in silver, and they gave one half of the profit, which they made on their money to the poor; and after a few days they produced two children, a boy and a girl, and they called their names John and Mary.  And then Andronicus and Athanasia took counsel together, and agreed to cease to live together as man and wife, and they began to devote their money and themselves to ministering to the sick and needy, that is to say, he ministered to the men, and she ministered to the women; and they continued to do this for twelve years.  And then their children fell ill of the plague, and they both died on one day.  And when Andronicus saw [this] he fell upon the ground, and he cast himself before the picture of our Lord Jesus Christ, and wept, saying, “Naked was I when I came forth from my mother’s womb, and naked shall I be when I go to God; God gave, God took away, blessed be the Name of God for ever.”  And their mother, in the intensity of her grief, wanted to kill herself, and weeping she came into the sanctuary to the place where her children were buried.  And during the night she saw, as it were, a monk who said unto her, “Weep not for the death of thy children, but weep for thyself, for thy children are rejoicing in the kingdom of the heavens.”  And when she heard this she went and told her husband, and they decided to renounce the world.  And they distributed their money among the poor and needy, and went forth by night, and came to Alexandria, and Andronicus left his wife there and departed to the desert of Scete, and became a monk with Abba Daniel; then he went back and took his wife to Upper Egypt, and placed her in a house of virgins and left her there.  And when Andronicus had lived with Abba Daniel for twelve years, he asked that he might go to Jerusalem so that he might be blessed in the holy places.  And whilst he was on the road thither, behold, by the Will of God, his wife met him, for she also wished to receive a blessing in the holy places.  Now, by reason of her labor and vigil her face had become so changed that he did not know her, but she knew him because his face had not changed.  And having visited the holy places they returned to the city of Alexandria.  And Abba Daniel had knowledge by the Holy Spirit, and he said unto Andronicus, “Dwell in a place with that monk who hath been thy companion, for he is holy”; and they dwelt [there] twelve years, and there was none who knew that the companion of Andronicus was a woman, but they called her “Athanasia.”  And Abba Daniel visited them on one occasion, and spoke to them concerning the profit of their souls.  And Athanasia having fallen sick, Andronicus went to Abba Daniel and said unto him, “My companion is going to die, come and visit him.”  When Abba Daniel arrived he found that she was very ill, and she said unto him, “Abba, I want thee to administer unto me the Offering.” and Abba Daniel devoted himself to the matter, and administered unto her the Holy Mysteries, and she died straightway; and there rose up a sweet odor and filled the place.  And when Andronicus want to wrap her up for burial, he discovered by her hair that she was a woman; and they found on the body a paper whereon her history was written, and a token which she left to her husband.  And when Andronicus had read the paper, and knew that she was his wife, his mind became obscured, and he began to beat his face and to lament.  And after a few days, now, he had become sick, the elders came and received his blessing, and having received the Offering, he died and entered into the kingdom of heaven.  Salutation to Andronicus.  Salutation to Athanasia.

Salutation to Abraham, Isaac, and Jacob, the elders of Israel.

And on this day also died the blessed man, the fighter, and the worker of wonders, Abba Philip, father of the Council of the holy city of Debre Libanos.  Of this holy man it was reported that he used to work signs and wonders.  And by the Will of God he came to his native place in the interior of the desert, in the days when Abuna Takla Haymanot lived there, to be his son, and that saint received him joyfully and he knew, by the spirit, that he was to be a chosen vessel.  And after he had tried him with spiritual exercises of all kinds, he arrayed him in the garb of the monk.  And Abba Philip fought the fight, and made himself to be like unto Takla Haymanot.  And when Abba Takla Haymanot died, Philip was set upon the throne of Abba Elisha.  After a little [time] one of the sons of the Abuna died, and when they wanted to wrap him up in cloths for burial, he moved himself and spoke, saying, “Abuna Takla Haymanot, Elisha shall come to me, and Philip shall sit upon thy throne”; and having said this he died.  And then they appointed Philip to be the Abuna.  And he followed a right course, like his father, and he received beatings and tribulations, as he ministered for righteousness’ sake; and he died under persecution (or, in exile), and he departed to God, bearing the crown of praise.  Salutation to Philip.