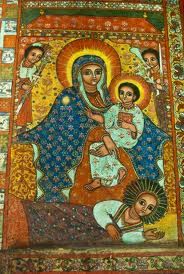 On this day is celebrated the festival of the Birth of our Lord, and God, and Redeemer, Jesus Christ.  Salutation to Thy Birth, O our Redeemer.

And on this day also is celebrated the festival of the translation of the body of Saint Thaddeus, the apostle, from the country of Syria to the city of Constantinople.  The righteous and Christ-loving Emperor Constantine had it translated, and he built a beautiful church, and consecrated it, as it were this day, and laid Thaddeus within it; and many signs and miracles appeared through his body.  Salutation to the translation of thy body, O Thaddeus.

And on this day also Saint Warestefa became a martyr.  This saint was a learned, and orthodox, and kindly ascetic.  The people wanted to make him a bishop but he fled from them, and having come to a certain city he dwelt with two Christ-loving brethren.  And the angel of God appeared unto him, and commanded him to confess our Lord Jesus Christ, and to receive the crown of martyrdom.  When he awoke from his sleep he told the brethren what he had seen, and they all agreed together and went to the governor and confessed our Lord Jesus Christ before him.  And the governor tortured them severely, and then cast them into prison until he went to the city of Senhur, when he took them with him, and again tortured them there severely.  And at the time when he was torturing them the angel of God appeared unto them, and strengthened them, and enabled them to endure, and healed their wounds; and after this the governor took them to the city of Dha and tortured them there.  And then the governor gathered together many confessors, and had read to them the roll containing the Edict of the emperor in respect of the worship of idols; and this Saint Warestefa seized the roll, and tore it in pieces.  And the governor was exceedingly wroth, and he commanded the soldiers to heat a furnace red-hot and to cast the saint therein, and they did as the governor commanded, and thus he finished his martyrdom in the furnace,  And as for the other two brethren the soldiers cut off their heads with the sword and the saints received the crown of martyrdom in the kingdom of the heavens.  Salutation to Waresnos.