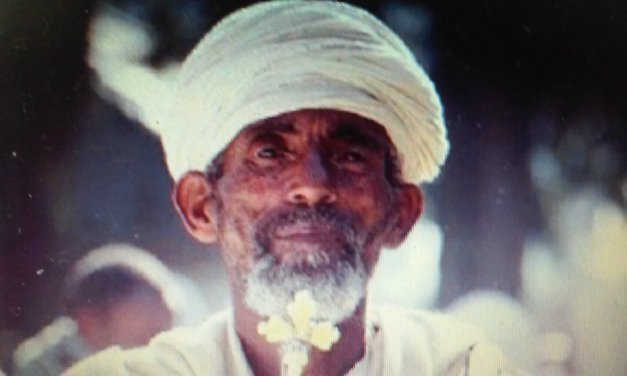 On this day Mercurius and Ephraim, the holy Galileans, became martyrs.  These saints were loving brethren in the spirit, and kinsmen in the flesh, and they were of the men of the city of ‘Akmim.  They made an agreement together in the spirit, and they became monks in the same monastery in Upper Egypt, and they lived therein fighting the fight with fasting, and prayer, and prostrations and vigils, for a period of twenty years.  And Satan, the Enemy, brought tribulation upon the churches, through the followers of Arius, who denied [Christ]; and they came, by the commandment of the Emperor Constantine, to administer the temples of the Orthodox.  And these saints rose up and came into the church and cast aside the bread which the wicked Arians, the deniers of Christ, had laid there, and they said unto the people, “He who hath not been baptized in the Name of the Holy Trinity is only fit to offer up an offering on the altar of idols.”  And the Arians seized the saints and beat them very severely, and the soldiers threw them down upon the ground and trampled upon them with their feet until their members and their bones were broken.  And they delivered their souls into the hand of our Lord Jesus Christ and received the crown of martyrdom in the kingdom of the heavens.  And certain believing men came, and they took the bodies of the saints, and wrapped them up in cloths, and laid them in a fair place.  Salutation to Mercurius and Ephraim.

And on this day also took place the translation of the body of Abba Timothy, Archbishop of the city of Alexandria, from Mesr (Cairo) to the monastery of Abba Macarius in the desert of Scete.

And on this day also died the blessed Paul, the monk.  It is related of this renouncer of the world that he enjoyed in this world honor and high rank, and that he had a wife, who was a saint, and blessed children, and that he was exceedingly rich.  And he wanted to become a monk.  And he called his wife and his children, and said unto them, “Behold, I want to sell you for Christ’s sake”; and they said unto him, “Thou art our god, do what thou wishest.”  And he took his wife, and his sons, and his possessions, and distributed all his money among the poor, and he came to a house for women, and he sought out the abbess and said unto her, “I want to sell thee this woman”; and she agreed to what he wanted.  And he wrote the bill of the sale, and handed her over to the abbess, together with what was with her; and she became a nun.  And he took his sons to another religious house, and he did with them even as he had done with their mother, and he sold them to the archimandrite, and handed them over to him; and then he went to another religious house and sold himself to the abbot.  And he said unto him, “I want to go into the church by myself,” and the abbot gave him permission to do so.  And he went into the church, and shut the door, and he stood up and stretched out his hands towards heaven, and cried out with a loud voice, saying, “O my Lord, Thou knowest that I have come unto Thee with all my heart.”  And a voice came unto him, which said, “Behold, I know this, and I have accepted thee with all My mind.”  And then he continued to perform all the hard work which had to be done in the monastery, and he made himself the most menial of all the monks; but God exalted him because of his humility, and many miracles appeared through him, and he died in peace.  Salutation to Paul who sold his wife, and his children, and himself for the sake of Christ.