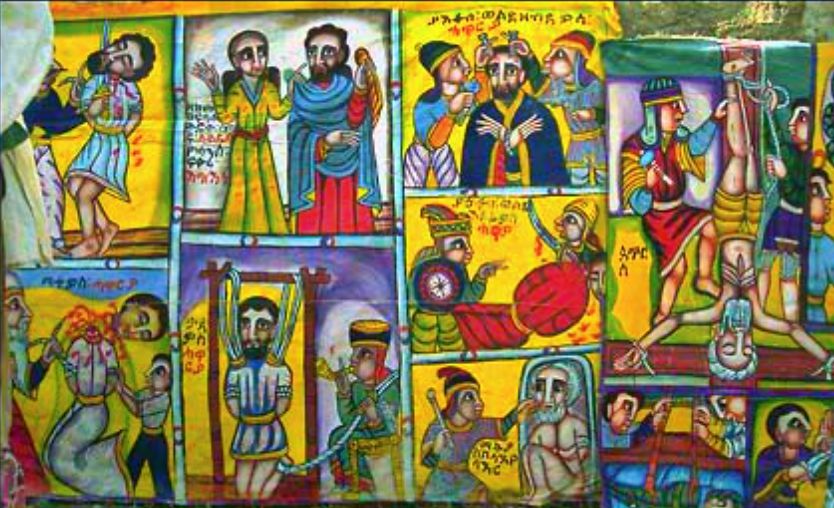 And David the prophet said, “He rode upon the Cherubim and did fly” (Psalm xviii, 10), and he also said, “He Who sitteth upon the Cherubim maketh the earth to quake,” And Ezekiel said concerning these wheels, “I saw a wind blow from heaven, and in it there was a cloud surrounded by fire, and brightness, and lightning, and four beasts supported Him. Each face (or person) had six wings, and they went before them. And the first beast had the likeness of the face of a man, and they ceased not to praise God by day and by night, and they said, Holy, Holy, Holy, Lord God of Hosts, all the heavens and the earth are filled with the holiness of Thy glory” (Ezekiel I). And John the evangelist said, “I heard a voice saying, Hallelujah! Salvation and power and blessing to our God. And the four beasts and the four and twenty elders of heaven worshipped God, saying, Hallelujah! God the Sustainer of the universe is King (Rev. xix, 4). After this I heard a voice saying, Praise our God with harp and psalms, Hallelujah! And I heard the voice of a multitude of peoples like unto the thunder, saying, God, the Sustainer of the universe, is King.” And many of the Books of the Old and the New Testaments testify concerning the honor of these Four Beasts which God hath set near Him to make supplication on behalf of all creation. He with the man’s form maketh supplication on behalf of the children of men, he with the lion’s form maketh supplication on behalf of the beasts, he with the bull’s form maketh supplication on behalf of the cattle, and he with the eagle’s form maketh supplication on behalf of the birds. Now these beasts are very much nearer God than all the other powers of heaven. For this reason the doctors of the Church have confirmed the commemoration of them, and have built churches to them in every place, even as at this day, because they make supplication for the race of man. Salutation to the Four Beasts and to the horses of the Cherubim.

And on this day also four hundred and eighty-four souls who belonged to the company of Isidore became martyrs.
Glory be to God Who is glorified in His Saints. Amen.