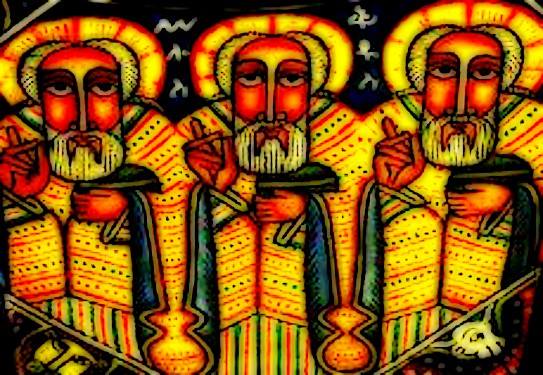 On this day died the holy father Abba Isaac, the forty-first Archbishop of Alexandria.  This father was one of the men of the city of Burles (Borlos), and his parents were exceedingly rich, and they feared God.  After very many days they begot this holy man, and they rejoiced over him with very great joy.  And having brought him to the bishop that he might lay his hand upon him, and baptize him with Christian baptism, the bishop saw upon his head at the time of baptism a cross of light.  And the bishop took his hand and laid it upon his head, and he prophesied concerning him, saying, “This boy shall be set over the Church of God”; and the bishop said unto his father, “Take care of this boy, for he shall be a chosen vessel of God.”  And when the boy had grown a little he taught him to read and to write, and he learned spiritual doctrine, and he used to read the histories of the saints.  And he left his parents and departed to the monastery of Abba Macarius, and he became a monk under the direction of father Abba Zachariah the abbot.  Now the angel of the Lord had informed the abbot of the coming of this holy man, and the abbot received him and rejoiced in him.  One day the righteous man saw him in the church, and he prophesied concerning him, saying, “Needs must that this Isaac shall be set over the Church of Christ.”  And in those days Abba John the archbishop was seeking for a learned man to be his disciple and his scribe, and the honorable father Abba Isaac was recommended to him; and the archbishop sent for him and had him brought to him, and he gave him a roll whereon to write.  And Abba Isaac made mistakes in his writing wittingly and wrote badly in order that the archbishop might send him away and that he might be free to go to the desert of Scete, for he hated the pomp of this world of men.  And when the Archbishop Abba John knew that Isaac had made mistakes and written badly purposely so that he might dismiss him, Saint Abba John said unto him, “Thou hast written well, and I shall not let thee go from here.”  When Abba Isaac knew that the archbishop would not let him go, he displayed to him all his learning and all his wisdom, and he wrote as beautifully as he could, and the archbishop rejoiced in him exceedingly; and after a few days he returned to the desert of Scete.  When the death of the Archbishop Abba John drew nigh, he asked our Lord Jesus Christ to tell him whom he should appoint to be archbishop in his stead after him.  And He said unto him in a vision, “Thy disciple Isaac shall protect this office after thee”; and Saint Abba John commanded the people, and told them that his disciple Isaac was to be appointed archbishop after him.  When Abba John was dead they seized this Saint Abba Isaac, and enthroned him Archbishop over the city of Alexandria.  And he made the Church to shine in his days, and he restored many churches, and especially the church of Mark the evangelist and apostle, and the archbishop’s house.  And great tribulation and many trials came upon this holy father, and he sat upon the throne of Mark the evangelist three years and a half.  And it is written in the history of the fight of this holy father that he commanded that he was not to be enthroned archbishop except on the First Day of the week.  Salutation to Isaac on whom the bishop saw a cross of light when he dipped his hand in the water to baptize him.