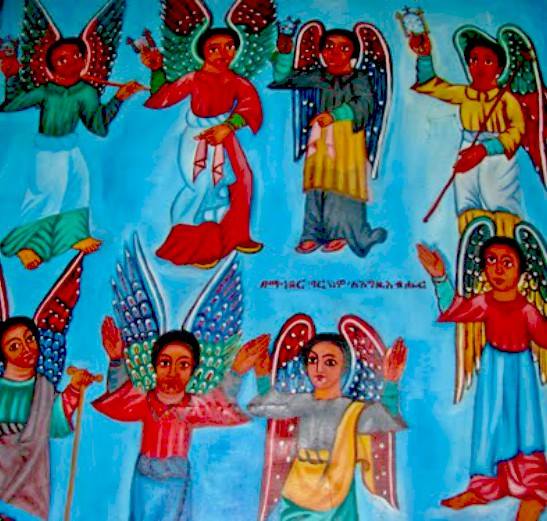 On this day fifty nuns, who were pure and holy virgins, together with their mother Sofia, became martyrs.  These pure and holy women came from widely separated cities and districts, and they were gathered together by divine and spiritual love, and the desire to assume the garb of the ascetic life, which is the garb of the angels.  They dwelt in one of the houses for virgins, which were in the city of Roha (Edessa), and they had as superior the holy Abbess Sofia who was filled with every kind of grace and with wisdom.  And she trained them so perfectly in the duties and exercises of the spiritual life that they became like angels upon earth, and they fasted and prayed continually, and read the histories of the spiritual fighting of the monks.  Among them were some who had dwelt in the nunnery for seven years. And some of them were novices.  The infidel Emperor Julian passed by their house in the city of Roha (Edessa) on his way to make war on Sapor, the son of Sapor, the King of Persia, for he had heard that Sapor was coming to make war upon him.  And Julian having gone against him and come back, he went to that nunnery wherein the virgins lived, and he asked [an officer] what the building was.  And [the officer] said unto him, “This is a nunnery.” and Julian commanded his soldiers to go into that nunnery, and to kill everyone in it, and to carry off all the goods which were therein.  And the soldiers of the infidel emperor went into the nunnery, and they beat the virgins with whips and cut off their heads with swords, and they plundered everything which was there.  And because of this thing the Lord took vengeance upon him with the vengeance of His wrath, that is to say, Saint Mercurius the martyr speared him with his spear whilst he was engaged in fighting, and he cast him from his horse, and killed him.  And Julian died an evil death, and he departed to the Sheol which is forever. And these holy virgins went into everlasting joy, and inherited the kingdom of heaven.  Salutation to the virgins whose blood Mercurius avenged.

And on this day also a General Council of the Saints took place in the days of Victor, Archbishop of the city of Rome, and in the days of Demetrius, Archbishop of the city of Alexandria.  Now the cause for the assembling of this Council was this:  Christian people were baptized on the festival of baptism, on the twenty-first day of the month Ter (Jan. – Feb.), and from the following day they fasted until the twenty-second day of the month Yakatit (Feb. – March), that is to say, for forty days, and then they ate.  And after thirty days they began, on the twenty-third day of Magabit (March – April), and kept the Octave of the Passion of our Lord Jesus Christ, and the festival of His Resurrection, for the Crucifixion of our Lord took place on the twenty-ninth day of Magabit.  After Demetrius, Archbishop of the city of Alexandria, had been enthroned, God illumined the heart of a certain artisan, who knew not how to read or to write, with Divine grace, and he learned all the Laws of the Church, and he knew them by heart, and he interpreted them.  Then by the Holy Spirit he compiled a table for reckoning the Epact, wherefrom men might know [the days of] the Fast, and the Resurrection; and he wrote in the Coptic and Greek (Rom) tongues.  Then he made a copy of this table of Epact and sent it to Victor, Archbishop of the city of Rome, he read it and found it good and rejoiced therein exceedingly.  And he sent and gathered together a large assembly containing fourteen bishops of his diocese, and many learned priests, and he read to them the calculation of the Epact, and they found it very good, and they rejoiced in it, and accepted it, and they wrote many copies of it and sent them into all countries. And the Holy Fast and the Festival of Easter have been regulated by that circulation from that day to this.  And they departed to their countries praising the Father and the Son and the Holy Ghost, to Whom be glory and honor.  Salutation to Demetrius and to the priests who made haste to assemble in order to make rules for times for keeping Lent and Easter.

On this day Paul and his three companions became martyrs.