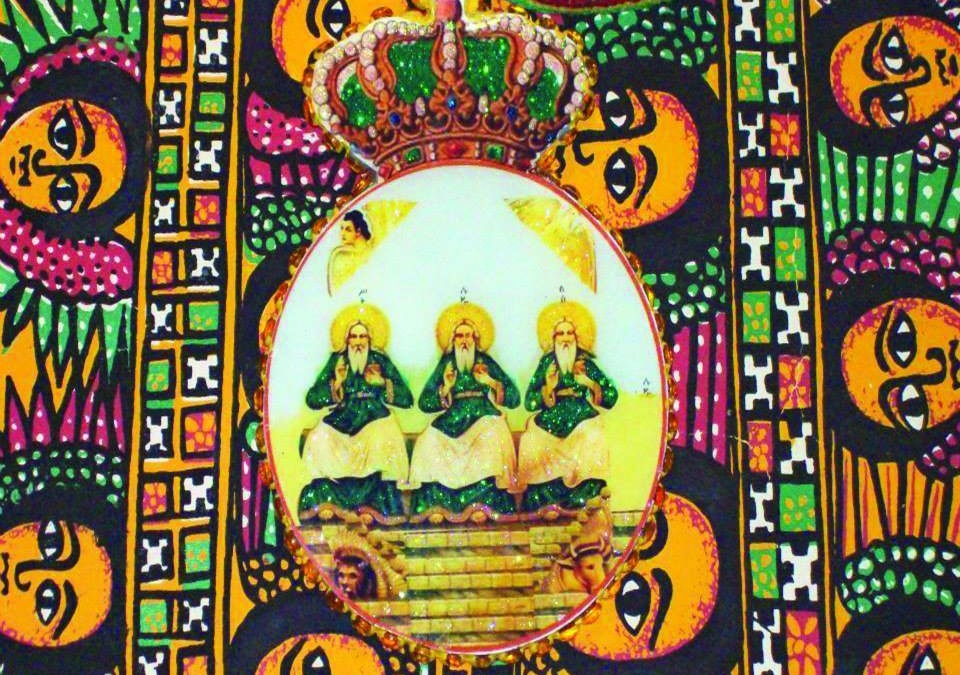 And on this day also died the holy father, Abba John, the forty-eighth Archbishop of the city of Alexandria.  This father was from the country of Cyprus, and he was exceedingly rich, and he lived in the city of Alexandria; and his father was governor of the city and he had married a wife and begotten children.  After this his wife died and his children, and forthwith he gave all his possessions to the poor and needy.  And he became a monk and he fought strenuously and became an ascetic, and he multiplied greatly his ascetic labors.  And he pleased God by his works, and his faith, and the beauty of his singing, and his righteousness, and his excellence.  And all the bishops of the country of Egypt agreed together, and they took him against his will and they made him Archbishop of the city of Alexandria, and he took his seat upon the throne of Mark the evangelist.  And he read the Holy Gospel and his light appeared in the manner wherein he fulfilled the duties of his position and his office, and he worked many miracles and wonders.  And he used to give to the poor and needy each day regularly whatsoever they lacked, and because of this Abba John, Archbishop of the city of Alexandria, used to be called “the merciful.”  And the Jews and pagans held him in great reverence, and they feared him and honored him, even as it is written in the history of his strife; and he shepherded his flock wisely and well, and he pleased God, and he died in peace.  Salutation to Archbishop Kiri, who was called “John the Merciful.”

And on this day also Saint Xystus the bishop became a martyr by the hand of Maximus the governor, who tortured the holy man with severe tortures and then cut off his head with the sword.  And Xystus received the crown of martyrdom in the kingdom of the heavens.  Salutation to Xystus the martyr.

And on this day also Saint Tatus (Tatia) became a martyr in the city of Rome, under Alexander the governor.  Having had her brought before him he said unto her, “Sacrifice to my gods”; and she said, “I will only sacrifice to Jesus Christ my God.”  And the governor commanded [his soldiers] to strip off the veil of her face, and when he saw her he marveled at her beauty.  Her eyes were like the stars of the heavens, her figure was like the palm, and her beauty was like that of the rose; and there was none who could be compared with her at that time.  When the governor saw her his heart was carried away by love for her, and he said unto her, “Obey me.  Offer sacrifice to the great god Apollo, and I will make thee mistress of the palace.”  And Saint Tatus (Tatia) said unto him, “I am the bride of Jesus Christ, and I will worship none but He.  Permit me to go into the shrines of thy gods for I would see their power”; and the governor took her into the house of his gods.  And when Saint Tatus (Tatia) had gone in she prayed and entreated God to destroy the idols, and straightway there was an earthquake, and the idols fell down from their thrones, and Apollo, their greatest idol, fell down and was broken in pieces, and many of the priests of the temple died.  And the foul spirit who was in Apollo cried out, saying, “What hast thou to do with me, O holy woman of God?  Behold thou hast broken in pieces my abode, and thou hast cast me out from it.”  When the emperor saw this he commanded his soldiers to throw her down on her face and to beat her with whips until the blood flowed from her body, now her blood was as white as milk, and they beat her until their muscles were tired.  And the angels of God inflicted pains on those who were beating her, but their torturing affected Saint Tatus (Tatia) in no way.  And the emperor also commanded the soldiers to give her to a famished lion, but when the lion came to her he crouched at her feet and licked them; and a voice came from heaven, saying, “Rejoice, O pure one, for I am with thee.”  And when the emperor saw that there was no way of touching her he commanded the soldiers to cut off her head with the sword, and the soldiers did so, and she finished her fight.  And the Bishop of Rome came by night, and he wrapped her body up in costly cloths, and laid it in a chest inlaid with gold and silver, and innumerable miracles took place through her body.  Salutation to Tatus (Tatia), perfect within and without, the dust at whose feet the lion licked.