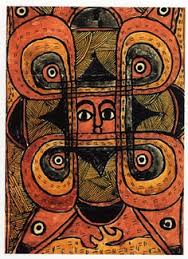 And on this day also died Saint Gregory, the worker of signs and wonders.  This holy man came from the country of Rome, and from his earliest years he was taught philosophy and the True Faith. He was a true Christian, and he remembered the end of this world, and the never-ending abidingness of the kingdom of the heavens, and he devoted all his mind to the salvation of his soul.  And the bishop of that city asked him to help him in the work of his episcopate, but he did not wish for this for he used to flee from the praises of men; after this he fled to the desert where he fought a good fight.  When the bishop of that city died [the priests] tried to make him bishop, but they could not find him; and when the people were gathered together, and Gregory, the preacher of Divinity, was with them, a voice came unto them saying, “Seek for Gregory, the dweller in the desert, and set him over you.”  And they sought for him but found him not, and they continued [to seek for him] for many days.  And whilst they were seeking for him in the desert and mountains, he was nigh unto them though they knew it not.  And when they found him not they all with one accord agreed and took a Book of the Gospels and set it over them, and this Book which they set over them they named “Gregory, the preacher of Godhead.”  And the angel of the Lord appeared unto this Saint Gregory, and said unto him, “Rise up and get thee gone, for they have made thee bishop over them; and refuse not this thing, for it is from God.”  And he was unable to resist the Divine command, and he descended from the mountain, and went to them, and they went forth to meet him with great honor, and they carried out his enthronement.  And God made manifest through him signs and wonders innumerable, and because of this he was called “Gregory, the worker of signs and miracles,” because of the multitude of his signs and wonders.  Now there was a certain small lake wherein two brethren used to catch many fish, which they sold for much money, and they disputed between themselves about the lake, each one saying, “This Lake belongs to me only.”  When they were unable to agree about it they came to Bishop Gregory to make a decision about that lake for them, and he decided that they should divide the lake between them.  And when they refused to agree together as he commanded them, and they would not do as the saint told them, but each continued to say, “I will take it for myself,” straightway Saint Gregory asked God concerning that lake.  And the earth swallowed up the lake, and the water became dry land, and it remains so to this day.  And the report of the signs and wonders, which he used to work, was heard in all the earth; and having finished his good fight he died in peace [and departed] from this fleeting world and entered into everlasting joy.  Salutation to Gregory whose odor is sweeter then cinnamon, and who dried up a lake about which two brethren quarreled.

And on this day also died the holy father Abba Cosmas, the fifty-first Archbishop of the city of Alexandria.  On this holy man came tribulation and much sorrow, and in his days great tribulation came upon the Christians.  And about that time also the King of the Muslims put them to shame, for he commanded that the Christians and the Jews should not wear white apparel, and that they should distinguish themselves by wearing apparel the color of indigo.  And in the days of this holy father many signs and wonders appeared, and among them was the wonder of the figure of our holy Lady the Virgin Mary, which was in the church of Saint Severus in the desert of Scete; this figure opened itself down on one side, and from it much blood flowed.  And there were many figures [of the Virgin] in the country of Egypt from the eyes of which tears flowed in abundance, and those who have understanding and wisdom will know that this took place because of the tribulation, and trials and sorrow which came upon the bishops and the believers.  And after this God gave good days in the place of those days which were bad.  And this father taught the believers continually, and he strengthened them in the True Faith; and he sat upon the throne of Mark for seven years and five months.  He died on the twenty-first day of the month of Khedar in the five hundred and seventy-fifth year of the martyrs (A.D. 859), and he was buried in a cave near Donosor.  Salutation to thy upright episcopacy, thou on account of whose sorrow the figure of the Virgin shed tears.

And on this day also are commemorated the holy martyrs Alphaeus, and Zacchaeus, and Romanus, and John, and Thomas, and Victor, and Isaac from the city of Eshmunen.  Salutation to you, O ye bright stars of Eshmunen.

And on this day also died Abba John of the city of Asyut.  The parents of this holy man were glassmakers, and when this saint was born they brought him up under good admonitions and teaching; after he grew up they taught him the craft of the carpenter, and after a few days, when his father and his mother were dead, he departed to the saints Abba Isidore and Abba Bayman and adopted the garb of the monk; and he devoted himself so strenuously to fasting and prayer that his name was heard of in remote monasteries.  Then the angel of the Lord appeared unto him and commanded him to go to his own country and to teach the people thereof the way of righteousness.  Now he never left his cell except to receive the Offering.  And one day two holy old men came to him, Abba Abzel and Abba Besoy, and before they had come near him he cried out from a distance, saying, “Peace to your visit, O my fathers,” and he addressed them by their names though he knew them not.  And they marveled greatly.  And Saint Sinoda, the pillar of Egypt, used to visit him often and embrace him.  When the wicked pagans attacked the land of Egypt and war broke out, the Emperor Theodosius sent the governor of Egypt who marched against them.  And he sent Saint John and took his cross, and the saint said unto the governor, “Fear not.  Thou shalt conquer,” and so it came to pass according to his word.  And war broke out a second time against Theodosius, and he sent [to enquire of] Saint John [how it would end, and the saint said unto him], “Be not sad. Thou shalt conquer,” and the Emperor Maximianus conquered them (i.e. the enemy).  One day the Emperor Theodosius commanded [his soldiers] to kill the men of Asyut and to plunder their city because of the great work of foulness, which they had done.  Now the angel of God made Abba John to know this before the governor arrived.  When the men of the city heard of the emperor’s command they went up the mountain to Abba John [and he said unto them], “Be not sad, for God will save you.”  When the governor arrived, he came into the cell of this holy man John in order to be blessed by him, and Abba John told the governor everything which the emperor had commanded; and when the governor heard this he was amazed and he prostrated himself before his holiness. And the governor had a son who was eighteen years old and who was possessed by the spirit of a devil, and he asked the holy man to heal him.  And the holy may prayed over some oil and water, and having anointed him therewith he was healed straightway.  Then the saint asked the governor to write to the emperor, and to abandon the slaughter of the men of Asyut, and the governor wrote a letter to him and gave it to Abba John.  And having taken the letter and gone into his cell, he prayed, and a cloud of light came and it took up Abba John and brought him to the emperor, and when the emperor had a table prepared Saint John threw the letter upon it.  And the emperor took it and read it, and he found that it was the letter, which the governor had written for Father John.  And having lifted up his eyes he saw a cloud of light above him, and he was terrified.  Then he wrote a letter to the governor in his own handwriting and under his own secret sign, [telling him] to abandon the destruction of the city through the prayer of Abba John.  And the emperor threw his letter on the cloud, and those who were assembled there saw a hand receive it, and it went inside the cloud; and during that night the saint returned to the mountain; and on the following day he gave the letter with the emperor’s seal upon it to the governor.  When the governor saw it he was amazed, and he praised God for the saving of the city, and he departed to his own country.  And the fame of Saint John being noised abroad a certain noble lady, a kinswoman of the emperor, went to him to be healed of her disease, and by his prayer she was healed.  Then the Emperor Theodosius died and the wicked Marcian reigned, and he brought tribulation upon our father Dioscurus.  And Abba John sent him a letter abusing him and cursing him because he had changed the Faith, and after a few days God killed him.  When Abba John was one hundred and twenty-five years old he knew that his [time of] rest had come, and as he was praying to God he fell forward on his face on the ground, and delivered up his soul into the hand of his Creator.  And innumerable signs and wonders appeared at his grave.  Salutation to John who was arrayed in holiness.

And on this day took place the translation of the body of Saint Deborah, who is also called “Tchebare,” of the city of Dalbat; her story is written in the book of her strife.