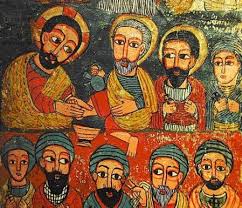 On this day became martyrs Cosmas, and Damianus, and the brethren ‘Antimos (Arithimus), and Londius (Leontius), and Abranius, and their mother Theodata.  These saints were natives of the city of Deyoma, in the country of Arabia, and came from the temple, which was built in the Name of the Son of God.  Their mother was a woman who feared God, and she was compassionate and gave large gifts to the pilgrims.  After the death of their father this widow brought them up and taught them the fear of God.  Now Cosmas and Damianus having learned practical philosophy (i.e. medicine) used to heal all those who were sick without fees and without gifts, and especially those who were poor; and their three brothers departed to the desert and became monks.  Now Diocletian denied Christ because of [the son of] the King of Kuez (Khuzistan), whom he had committed for safe keeping to a bishop whose name was Gagyos.  Abba Gagyos took an oath to the Emperor Diocletian that the son of the King of Kuez (Khuzistan?) had died in his house, and that he had buried him with his own hands, [whereas the bishop had connived at the prince’s escape].  For this reason Diocletian worshipped foul and brutish idols, and commanded all the people who were in his kingdom to worship idols.  And certain men accused Cosmas and Damianus of preaching in the Name of Christ in every city, and of ordering the people not to worship idols.  And Diocletian sent letters commanding his soldiers to bring them to him, and they did so, and they handed them over to Lasius the governor of the city, who tortured them severely with fire, and beat them cruelly with whips.  Then he asked them questions about their three brothers, and when he knew the place where they were, he sent men and they brought them and their mother also with them.  Then he commanded the soldiers to torture the five of them on the wheel, and they did as he commanded.  And after this they cast them into a red-hot fiery furnace, and they remained therein for three days and three nights and were unharmed.  And they also cast them into the blazing furnace of the baths, and burned them upon [a red-hot] iron bed, but in spite of all these tortures they were not able to overcome them, and God raised them up whole and unharmed.  When the governor was weary of torturing them, he handed them over to the emperor who also tortured them cruelly.  And their mother encouraged them to endure, and she comforted them and she cursed the emperor to his face and his filthy idols.  And straightway the emperor commanded the soldiers to cut off her head with the sword, and they cut off her head, and she received the crown of martyrdom in the kingdom of the heavens.  And her body was cast out on the earth and no man dared to bury it.  Then Cosmas cried out, saying, “O men of this city, is there not among you one man who hath in him sufficient mercy to hide the body of this poor old widow and bury it?”  And straightway Victor, the son of Romanus, came, and he was bold enough to take her body and prepare it for the grave and bury it.   When the emperor heard that Victor had buried her body he was wroth and he commanded his soldiers to drive him into exile in the land of Egypt where he received the crown of martyrdom.  And as concerning Cosmas and Damianus and their brethren the emperor commanded his soldiers to cut off their heads with the sword, [and they did so], and they received crowns of martyrdom and life everlasting in the kingdom of the heavens.  After the days of persecution were ended a church was built for them, and God made manifest many signs and wonders [through their bodies].  Salutation to the children of Theodata, who are to be praised.

And on this day also became martyrs two hundred and ninety-two men, and nine and forty women who were companions of Saint Cosmas.  Salutation to these martyrs.