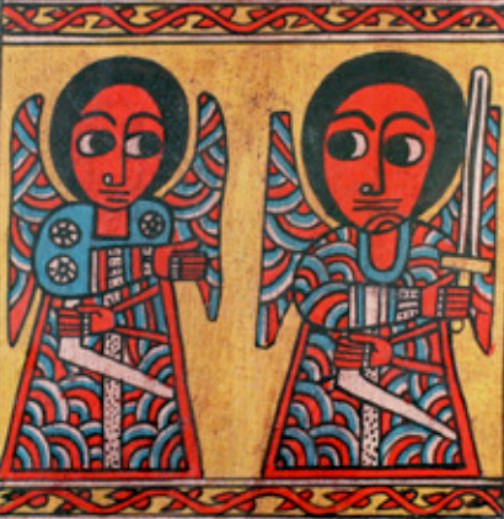 On this day died the great Saint Cornelius.  This holy man was the captain of one hundred men in Caesarea of Palestine and he worshipped the stars.  And when he heard the preaching of the apostles and saw the signs and wonders which God wrought by their hands, not one of which other men could do, and not one of which the gods whom they worshipped could do, his heart fell into despair and doubt concerning the gods whom he worshipped.  And straightway he abandoned the worship of idols, and he fasted and he prayed by day and by night.  And when he prayed he said also, “O God, since I am terrified at Thy knowledge, have mercy upon me, and guide me into Thy way.”  And he gave alms to the poor continually, and love towards all men was in his heart, and God had compassion upon him, and sent to him an angel who comforted him and told him that his prayers and his alms had ascended before God and had been accepted by Him.  And the angel of the Lord commanded him to send to the city of Joppa, and to summon Peter the Apostle from the house of Simon the sewer, so that he might have mercy upon him and show him the way of God; and he sent and brought him.  And when Peter the Apostle came to him Cornelius bowed down before him at his feet, and Peter the Apostle raised him up, and said unto him, “I am a man even as thou art.”  And Peter found with him many of the people, and he instructed them and said unto them, “The Law of the Torah (Pentateuch) prohibiteth us from mingling with the uncircumcised, but God hath shown me in a vision and hath made me to know that it is not desirable for me to say who I am among men and that any man is unclean.  For this reason I came to you when ye called me; what do ye want?”  And Cornelius answered and said unto him, “Three days ago I was praying at the time of the ninth hour, and behold a man stood before me in white apparel, and he shone brightly.  And he commanded me to call thee and behold thou hast come and we are all before thee to listen to whatsoever thou commandest, and what thou shalt command us to do from God.” And Peter the Apostle opened his mouth, and told him about Christ, and he informed him concerning the mystery of the working of His wisdom, and His being made man, and His Crucifixion and His Resurrection, and His Ascension into heaven, and the working of miracles in His Name.  And Cornelius believed on our Lord Jesus Christ, and all his men, and his slaves, and many of the people who were with him, and they were baptized in the Name of the Father and the Son and the Holy Ghost.  And straightway the Holy Spirit descended upon them, according to the testimony concerning this matter in the Book of the Acts of the Apostles.  Then Cornelius abandoned his business and rank in this world, and Peter gave him the position of a servant of Christ, and appointed him Bishop of the city of Alexandria.  And Cornelius went there and preached in the Name of our Lord Jesus Christ, and he showed their error to those who worshipped idols, and he illumined their hearts with the knowledge of God, and he strengthened their hearts by working signs and miracles before them.  And having baptized Demetrius, the governor, he baptized all the men of the city; and he died in peace and received a crown like the apostles who preached.  Salutation to Cornelius, one of the Seventy-two disciples.

And on this day also died Abadiah the prophet, whose name being interpreted is “servant of God,” and “he gives thanks to God.”  This righteous man was a native of the city of Susem (Shechem) in the district of Bet-Kherum (Beth-Ephraim). He was the disciple of Elijah the prophet, and he endured many trials, which came upon him, and he was saved from them (?) by patient endurance.  He was the captain of the third fifty whom Elijah the prophet spared, and he went down and departed with him to Ahaz the king.  After this he forsook the service of the king in the country and prophesied; and when he died he was buried with his fathers in peace.  Salutation to Obadiah who was clothed with the spirit of knowledge.

And on this day also was consecrated the church of Marina.  [This paragraph is wanting in the Bodleian MS].