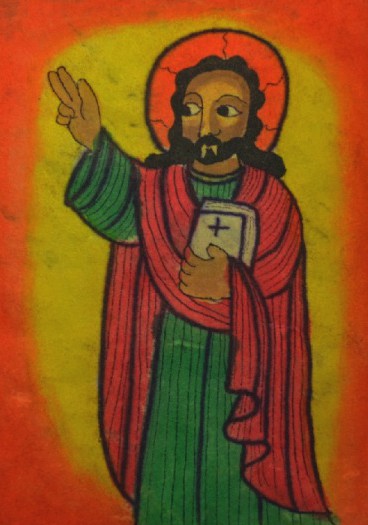 On this day is commemorated the festival of the Four and Twenty Priests of heaven, who are round about the throne of God, who are priests indeed, and who are beings of the spirit and have no bodies.  They are exalted above all the saints and the spiritual hosts.  They are saints with God and they make intercession on behalf of the race of men, and they bring unto Him the prayers of the saints like incense in the censers, which they have, in their hands. And alms and oblations cannot ascend to God except through them even as Saint John the evangelist says in the Vision of the Apocalypse, “I saw the place of Four and Twenty elders round about Him, and they were sitting on four and twenty thrones; and on their heads were four and twenty crowns, and in their hands were four and twenty censers containing sweet-smelling incense, which is the prayers of the saints who dwell upon earth, and which they make to rise up before God, the Sustainer of the Universe.” And he also says, “And I heard Four Beasts praising and saying, Holy, Holy, Holy, Lord [God] of Hosts, the heavens and the earth are filled full of the holiness of Thy glory.  And straightway the four and twenty priests of heaven fell down with their faces to the ground, and they took off their crowns, and they said unto Him, Glory, and honor, and thanks are fitting for Thee.  And when a command went forth from God they fell down again with their faces to the ground, saying, Glory, and power, and judgment, and righteousness belong to our God” (Rev. iv and v).  And because the doctors of the Church have found statements about these Four and Twenty Priests of heaven in the Holy Scriptures, and have seen stories told of them by the Apostles and in their Canon, saying that they are nigh unto God, they have ordered and ruled, saying, “The name of him that celebrates their commemoration shall be revealed upon earth.  And they shall entreat God on his behalf to forgive him all his sins.”  Therefore the doctors of the Church tell the people to honor the festival of the commemoration of the Four and Twenty Priests of heaven.  Salutation to you, O priests of the Law.

And on this day Azkir, the priest of Nagran, and eight and thirty men who were with him became martyrs in the days of the kingdom of Sarabhel, the King of Hamir.  And he commanded his soldiers to bring ‘Azkir to him, and they brought him into the prison house and shut the door on him, and he commanded the keepers of the prison that no man was to be taken to him.  And when Saint ‘Azkir had prayed, the doors of the prison house were opened, and fifty men came in, and he made a cistern of water there, and he baptized them therein in the Name of the Father and the Son and the Holy Ghost.  When Sarabhel the king heard this he commanded his soldiers to bring ‘Azkir out of the prison house and to take him to another place; and the holy man met a man whose name was Cyriacus, who said unto him, “Good news for thee, O ‘Azkir; they are taking thee to martyrdom.”  When the king’s guards heard this they bound Cyriacus with ‘Azkir in fetters.  And on the road they met two men, and they said unto him, “Baptize us for Christ’s sake”; and ‘Azkir prayed to God, and water sprang up in the desert, and he baptized the two men and Cyriacus.  When they reached the desert the guards and their beasts lacked water, and they besought Saint ‘Azkir to entreat God on their behalf because they were short of water.  And ‘Azkir prayed to God and straightway a cloud came and poured down rain into the waterholes to the depth of the hand, and seven hundred men and their beasts drank of that water and were satisfied.  And they brought ‘Azkir to the King of Hamir, and he said unto him, “What is this new doctrine which thou hast brought into my country?”  And Saint ‘Azkir said unto him, “It is not a new doctrine, but one which the prophets have preached in the Book of the Law, and it hath been heard that the King of the Jews was crucified in the Christian Faith.”  And one of the Rabbanat rose up and said unto the king, “O my lord, command [thy soldiers] to take him into the city, and let them hang him upon a tree, and burn him alive”; and the king commanded according to his words.  And when they had brought ‘Azkir to the city of Nagran they hung him upon a tree and lighted a fire [under him].  And when Saint ‘Azkir had prayed, his fetters were loosed and he went forth alive from the fire.  And the Jews said also, “Come, let us stone him”; and the greater number of the Jews killed him by stoning, and the rest took swords and cut off his head.  Thus Saint ‘Azkir finished his martyrdom and departed to everlasting life.  Salutation to ‘Azkir.

And on this day also are commemorated Claudius, and Gayyos, and Artyo, and Dioscurus the martyr, who died on this day.

And on this day also died Abba Yosef (Joseph) of the city of Sana.  The parents of this holy man were rich in faith, and they had no son except Yosef (Joseph); and they brought him up very carefully and piously, and they taught him the Books of the Church. Now his form and appearance resembled those of Joseph, the son of Jacob.  When he had grown up there entered into his heart the remembrance of death and the transitoriness of the world, and he went into a monastery and became a monk, and a fighter in the spirit; he devoted himself to fasting and to prayer, and he shut himself in his cell, and never went out except on the day of the Sabbath, at the time of the Offering.  And the report of him was noised abroad, and the men of Adyam came to him to receive his blessing.  And his father and his mother had no news of him, and they continued to make supplication to God that He would enable them to find him; and when they heard the report of him they went to him so that he might pray for the discovery of their son.  When they came to him he knew them, but they did not know him, and after the men had removed themselves he made himself known unto them, and commanded them to tell no man; and he comforted them and sent them away in peace.  And God bestowed upon him the power to work signs and wonders, and at length Satan was envious of him.  And he went to the governor of the city and told him that this holy man had much money, and the governor sent soldiers who bound the holy man in fetters and brought him to the prison house.  On the following day when they looked for him they found the fetters thrown about on the ground; and the governor was terrified and bowed down at his feet and did reverence to him and sent him into his own house.  After much strenuous fighting he died in peace, and signs and wonders, which were innumerable, appeared at his grave.