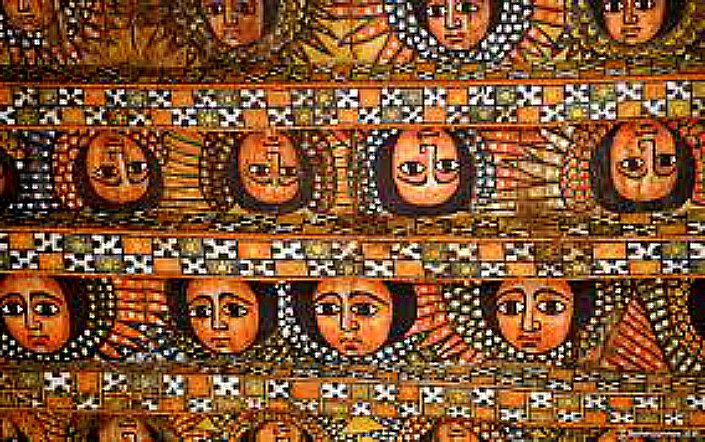 And on this day also is commemorated the Birth of our Lord and God and Redeemer, Jesus Christ, of the holy two-fold Virgin Mary, our Lady.  Salutation to Thy Birth, O Thou Who didst show to Peter Thy raiment, which Arius had rent.

And on this day also are commemorated the forty-seven thousand martyrs who suffered in the time of the Emperor Diocletian.  Salutation to the righteous men who fought against Diocletian.  [This paragraph is wanting in the Bodleian MS.]

And on this day also became a martyr the great Saint Clement, Archbishop of the city of Rome.  This holy man was a royal kinsman, and was the son of Caustus, the captain of the army of the Emperor of Rome; his excellent and honorable parents taught him all the various kinds of learning and the philosophy of the Greeks.  And when Peter the apostle preached in Rome the preaching of the Gospel, Caustus the father of Clement believed through this holy man that our Lord Jesus Christ was truly [God], and he gave all his goods to the poor and needy.  And when his father went to the emperor he remained many days, and the brother of the holy man Caustus thought that he would marry his wife.  When the mother of the holy man knew this, she took Clement and his younger brother and embarked on a ship, to go to Athens, and to have her sons taught philosophy and learning until their father returned from the emperor.  And straightway a violent storm rose up against them, and the ship was smashed, and one after another clung to one of the timbers, and the waves of the sea washed this holy Clement to the city of Alexandria, where he remained a few days.  And God called Peter the apostle and said unto him, “Get thee to the city of Alexandria so that thou mayest find the servants who are fit for mercy.”  And when Peter the apostle came to the city of Alexandria, and preached the preaching of the Gospel therein, no man in the city of Alexandria believed except this holy man Clement.  When, however, he heard the preaching of Peter the apostle he believed on our Lord Jesus Christ, and Peter baptized him with Christian baptism, and explained to him the Godhead of our Lord Jesus Christ, and the riches and glory of those who worship Him, and how signs and wonders are wrought [in His Name].  And from that day Clement followed Peter the apostle, and he became his disciple, and he wrote the “Contendings of the Apostles,” and what happened to them with infidel kings.  Then he preached in many cities, and the apostles gave unto him the Books of the Canon to proclaim, and then he was appointed Archbishop of the city of Rome.  And he preached therein, and converted very many people thereof to the knowledge of God.  And the Emperor Trajan, the infidel, heard of him, and he sent his guards to seize him and bring him before him, and the emperor said unto him, “Worship the idols and deny Christ.”  And when Clement would not hearken unto his command he sent him away to a certain city to be tortured, for he was afraid of the men of the city of his kinsfolk, and he did not want to torture him where he was lest the people should rise up against him.  So he sent him away to the governor of that city and ordered him to torture him with many tortures.  And that governor hung round the neck of the holy man Clement a heavy iron implement with four feet (anchor), which is placed in ships, and he cast him into the sea.  And he delivered up his soul into the hand of God, and he received the crown of martyrdom like the apostles who preached.  And it came to pass that when a full year had passed he was seen in the sea, and the body of Saint Clement appeared, and he was preaching in the depths of the sea just as if he were alive.  And the people came and were blessed by him, and they wished to carry him off, and they brought a splendid stone coffer, and laid him in it, and they wished to take him up and bring him out of the sea, but they were unable to move him from his place.  And they knew that he was unwilling to come out of the sea and they left him there, and departed. And each year, on the day of his festival, an opening appears in the box above his body, and the people come and are blessed by him.  And many believing men who have seen this have described and written down accounts of some of his miracles, such as the following.  One year certain men came to be blessed by him, and when they went forth from him they forgot a little child who was behind the coffer of Saint Clement.  This happened by the Will of our Lord Jesus Christ, so that He might reveal their work to His saints and friends, and the grace, which they receive from Him.  And when they had gathered together above the sea, they sought for the father [of the child] and found him not.  And they thought that he was dead and that the beasts, which are in the sea, had devoured him, and they wept for him, and they celebrated his commemoration, and they consecrated the Offering and offered up incense according to their custom.  And when the second year had arrived and the time had come for the sea to open itself again, certain men who came according to their custom, found the child alive and standing up by the side of the coffer of Clement.  And they asked him, saying, “How didst thou exist and on what didst thou live?”  And he said unto them, “Saint Clement gave me food to eat and drink, and God preserved me from the wild beasts of the sea.”  And when they heard this they marveled exceedingly and they praised God Who is to be praised and glorified above all His saints and martyrs who have contended for His holy Name’s sake.  Salutation to Clement the author of the “Contendings of the Apostles”.