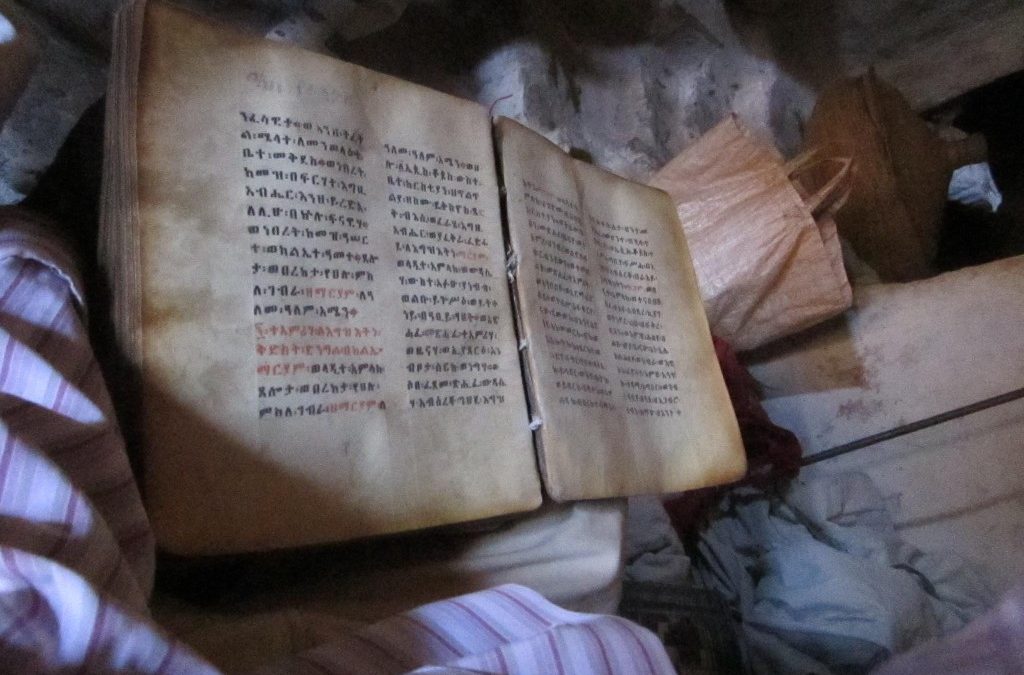 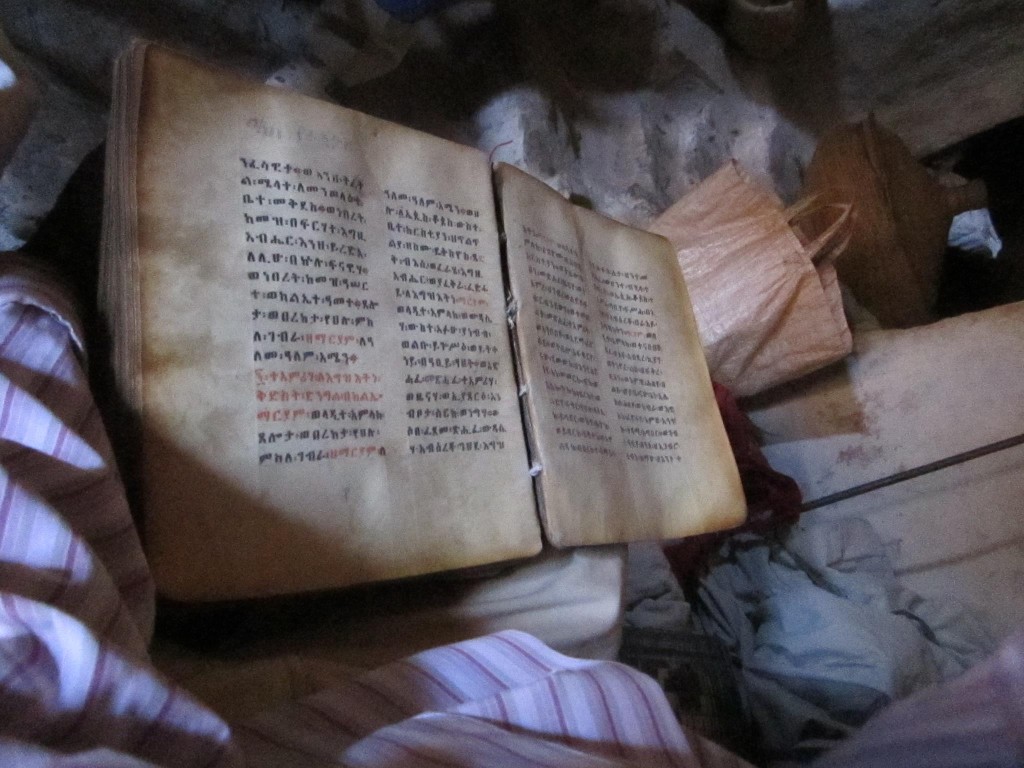 The Holy Scriptures are one of the two great foundations of the faith and here is what our church holds and teaches concerning it. The word of God is not contained in the Bible alone, it is to be found in tradition as well. The Sacred Scriptures are the written word of God who is the author of the Old and New Testaments containing nothing but perfect truth in faith and morals. But God’s word is not contained only in them, there is an unwritten word of God also, which we call apostolic tradition. We receive the one and other with equal veneration.

The canon of the Ethiopic Bible differs both in the Old and New Testament from that of any other churches.
List all books. As a whole, books written in the Geez language and on parchment are numerous. The Ethiopian Orthodox Church has 46 books of the Old Testament and 35 books of the New Testament that will bring the total of canonized books of the Bible to 81.

These are the following

A. The Holy Books of the Old Testament

B. The holy books of the New Testament

The Ethiopic version of the Old and New Testament was made from the Septuagint. It includes the book of Enoch, Baruch, and the third and fourth Esdras. In the international Bible studies there are certain books belonging to the class usually designated pseudepigraphic. The whole Christendom and whole-learned world owes a debt of gratitude to the church of Ethiopia for the preservation of those documents.

Among these books is the book of Enoch which throws so much light on Jewish thought on various points during the centuries immediately preceding the Christian era. The book of Jubilee (Kufale, i.e. Division) otherwise known as the Little Genesis has also been preserved entire only in the Ethiopic version. The preservation of yet one more book in its entity, namely, the Ascension of Isaiah, is to be remembered to the credit of the Ethiopic Church.

But books, which should be considered for higher education and could be prepared carefully in order to suit modern thinking, are the following.

1. Theological books such as the following

– Haymanote Abew or the Faith of the Fathers in which other writings of the Apostolic Fathers and also of the Eastern Orthodox Church fathers are to be found.
– Works of St. Cyril and many other writers.
– The exegesis of the letter to the Hebrews by St. John Chrysostom.
– The pastoral work of St. John Chrysostom.
– Severious of Asmunage – a collection of twelve exegetical works, which prove the teaching concerning God.
– A book that proves the existence of God Hilawae – Melekote
– The book of Hawi, which proves the teaching concerning God.
– Book of the mystery by Abba Georgis containing arguments and evidence about the mysteries.
– Religious documentary book by Jacob of Elbaredia.
– The true faith (written during the reign of Zera Yacob)
– The five pillars of the Sacraments (as Catechism).

2. Books that have the orders of the church

3. Books on Church administration and on counseling

Most of these books are written in sections or parts for bindings, these are

– Book of Abushakir
– Sid, the Son of Batrik
– Mark son of Kenbar
– Leader of Blind – by Demetros
– Mathematics concerning calendar by the Monastery of Bizen

8. Compositions (works) on the virgins (celibates)

9. Writings that describe the biography of the martyrs

11. Books on the tradition and culture of the country

– On old age and adolescence
– Customs and traditions of Ethiopia

12. Books on nature and science

13. Books, which show writings of compositions

– The composition or writing of one of the criminals (outlaws), who was hanged with Jesus
– On the Miracles of St. Mary and many other apocryphal books are to be found.

There are very many grammatical books written by different people and found at different places in the world. The above noted are but a very few examples from among the different books numbered by the thousands that the Ethiopian Orthodox Tewahido Church has. In the past, at present and even in the future either in the church or at the schools what the church uses for educational services was and will not be outside of these books.

In the past, the Ethiopian Orthodox Tewahido Church had not much opportunity to expand and propagate the above, noted doctrine and orders of the church inside and outside the nation; this is because of the different circumstances prevailing in the surroundings of the country. Because of the advent of European Colonialism upon its neighboring African countries and the great monetary support that other religious groups received to convert Africans. The Ethiopian Orthodox Church had no other choice but to defend on and preserve all here Christian legacy. Henceforth, she was unable to raise her apostolic voice louder among her African brothers and sisters. Nevertheless, the sense of freedom that the Ethiopian Orthodox Tewahido Church maintained for centuries being, the torch of freedom to all Africa has enabled Africans to be aware of their freedom.

In this 20th century, the Ethiopian Orthodox Tewahido Church is conducting many apostolic missions – that is organizing church councils and founding clergy training programs within the country; and carrying on her apostolic missionary activities.

CANON LAW
The canons, regulations of Christian instruction and worship of the Ethiopian Church, are contained in the Sinodos and Didascalia, two compilations of ancient church canons, dating from the second period of Ethiopic literature. These canons are closely associated with the New Testament.

The Sinodos, classed as part of Ethiopic New Testament, is composed of various elements: Constitutions of Apostles, the Statutes of the Apostles, the Canons of the Apostles, the canons of Various councils-Nicaea, Gangra, Sardica, Antioch, New-Caesarca, Aneyra, Laodienea – and various theological and pastoml treatises. Eight books make up the Sinodos. Sinodos is the Corpus juris Ecclesiastic of the Church. The various discourses and treaties included in this Corpus are:

Briefly the contents of the document are: Questions of morality, the duty of studying the Scriptures and observance of the Seventh Commandment, mutual duties of husband and wife, offices and duties of Christian ministers; the duties of widows; the method of baptism, laymen not to baptize; vows of virginity; the duties of the faithful towards the martyrs; observance of Christmas, Epiphany, Lent, Holy week and method of calculating the date of Easter; warning against heresy; respect to be shown to the faithful departed; prayers to be used on specified and unspecified occasions.

“Glory be to the Almighty God,” Amen.