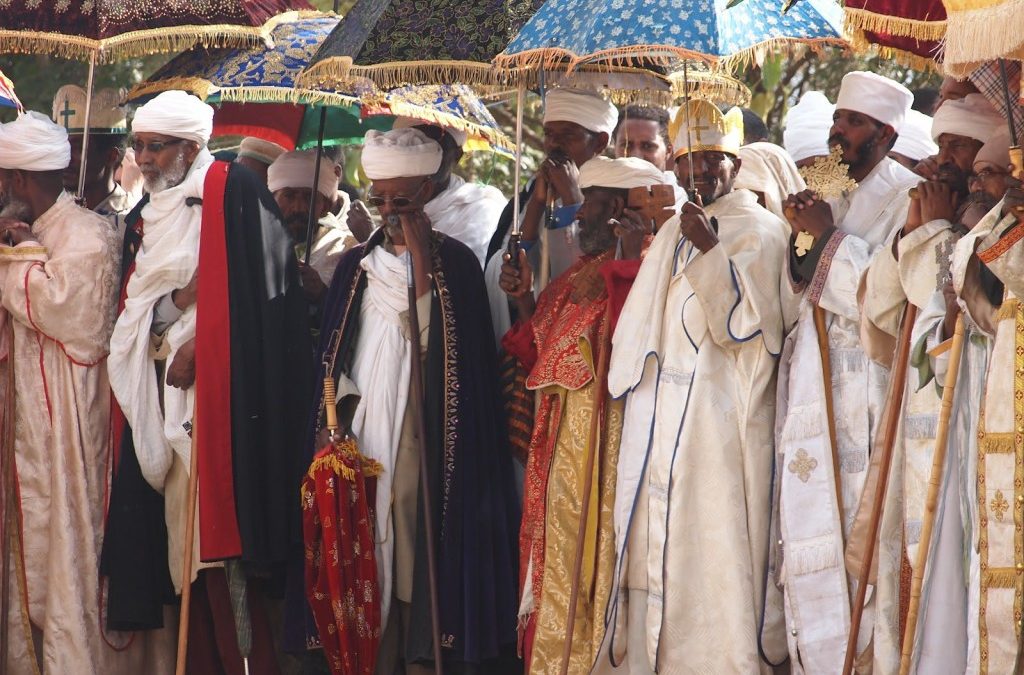 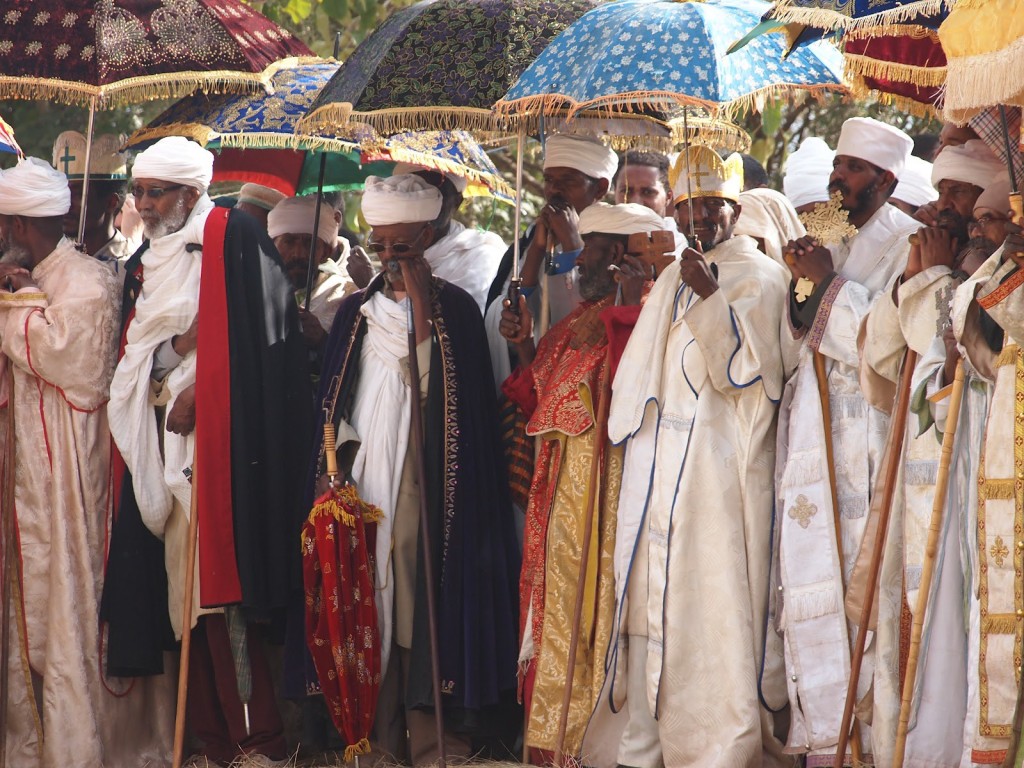 Etymologically, the word hierarchy means the rule of priests. It s derived from the Greek HIEREUS (priest) and ARCHE (rule). The term hierarchy never occurs in the New Testament. ARCHE is used in the New Testament never in the sense of ecclesiastical authority. Instead, EXOUSIA (power or authority) is used on a few occasions; such as in relation to the works of Jesus, the Ministry of the Twelve and the Apostolic authority of St. Paul to build the Church (Matt. 9:6; 10:1; Luke 9:1; II Cor. 10:8). The character of EXOUSIA in all these is one of DIACONIA (service or ministry). All those who hold authority in the Church have it from the Lord, who Himself came to ‘serve’. ARCHE may be understood as EXOUSIA which is essentially DIACONIA. Thus hierarchy may receive its correct meaning when it is qualified by ‘ministerial’; and hence, hierarchy is ‘priestly ministry’.

The hierarchy of the Ethiopian Church consists of the traditional three orders of episcopate, presbyterate and diaconate. Of these three orders, the episcopate is most central, and it is by the same that hierarchical continuity is preserved in the Church.

The Ethiopian hierarchy it traced to the Church of Alexandria. St. Frumentius, a Christian from Syria, as the first missionary to Ethiopia and as closely attached to the Aksumite court during the middle if the fourth century, was consecrated by Patriarch Athanasius of Alexandria as the first bishop (ABUNA) of the Ethiopian Church. Thereafter, the hierarchical head of this Church was always sent from Egypt until recent times.

In the years following the Muslim invasion and persecution, at the beginning of the seventeenth century, the Ethiopian Church had to pass through a period of crisis which seriously affected the hierarchy. Even before this time, the Jesuits had been working to bring the Ethiopian Church under the jurisdiction of Rome, although with no success. After thses disturbances, the hierarchy was fully restored in 1881, when four Egyptian bishop were sent to Ethiopia; on the death of the last of them, the Church pleaded with the Coptic Patriarch of Alexandria for the consecration of men of Ethiopian nationality as bishops for this Church. As a result, five Ethiopian bishops were consecrated in 1928. The recognition of the autonomy of the Church of Ethiopia was marked by the consecration of five other Ethiopian bishops in 1948 (one of whom, the late Abuna Basilios, was made Archbishop in 1951) and was sealed by the installation of Abuna Basilios as the first Patriarch of Ethiopia in 1959 by the Patriarch of Alexandria.

Today the Ethiopian Church is an autocephalous Church in every respect, and it holds that its doctrine and hierarchy belong to the living tradition which has been transmitted to posterity since Apostolic times.

The Hierarchy and the Laity
The Ethiopian Orthodox Church shares with many other Churches the belief that the Royal Priesthood of Israel and the Aarnoic institutional priesthood have become one in Jesus Christ the Eternal High Priest. The people of the New Covenant constituted in Him possess His Royal Priesthood, and are called after the Old Testament fashion, “an elect race, a royal priesthood, a holy nation, a people for God’s own possession” (I Pet. 2:9). All those who are properly baptized within the Church are members of this priestly community.

After the pattern of Jesus’ baptism and anointing with the Spirit the Church has the washing of regeneration, baptism, and the granting of the Spirit, Chrismation, (cf. Tit. 3:5). Following the ancient custom of the Church, the two are administered together in the Ethiopian Church. As the sealing of the Spirit, Chrismation constitutes the lay ordination into the sacramental and active life of the Church. Thus, every baptized and anointed persons is a member of the Royal Priesthood. The hierarchical orders are special ranks within the Church, the People of God (LAOS TOU THEOU), from which the term laity is derived.

The Apostolic, priestly and ministerial functions of the Royal Priesthood are a means whereby Christ works through His Body in the world. The Church being the Body of Christ acts as one body; and the ministry of the Church, thus, is a ministry acted as one whole. Yet it is recognized that there is a distinction among the members based on the diversity of ministries and gifts of the Spirit, interdependent and interrelated among themselves. They include prophecy, service, teaching, exhortation, contribution, aid-giving, merciful acts, apostleship, pastoral work, healing and administration (Rom.12: 6-8; Eph. 4:7-14; I Cor.12:27ff). The gifts are given in variety, but by the same Spirit (I Cor.12: 4ff).

Thus, the hierarchy is not regarded as a separate class, but as a constituent part of the People of God. All ministry in the Church is the ministry of Christ to the Church and through the Church to the world. Because of this, the hierarchy does not function separately but in close union with the laity in the Church’s teaching, worship and government. The laity are given vital roles to play in the life of the Church in many spheres.

Hierarchy and Sacraments
Within the wider ministry of the whole Church the hierarchy is set apart by further ordination. The sacraments as means of grace are conveyed to the faithful by the hierarchy’s ministry of grace.

The Ethiopian Church regards Ordination as a sacrament, and insists that for the administration of sacraments there must be validly ordained persons. In Ordination the invisible divine grace is transmitted to the ordained with the visible sign of laying on of hands of the bishop.

By Ordination, one is given the divine grace for the fulfillment of a particular function, and thus one is set apart for that particular priestly ministry. It is to be fulfilled in the Church and is meant as a service to the world. At Ordination, special grace is granted to the ordained by the Holy Spirit, which enable him to appropriate individually the grace granted corporately to the community.

The single grace of the sacrament of Ordination is distributed among the three grades of episcopate, presbyterate and diaconate. Although by Ordination the ordained is appointed to carry out concretely a function of the Royal Priesthood, it is not simply the apportioning of a place by the Church, but it is a setting apart by Holy Spirit chiefly for the sacramental ministry in the Church and for the wider service with the Church to the world.

The Place of the Hierarchy in the Unity and Order within the Church
The Ethiopian Church recognizes that the inward essential authority of the Church is Christ Himself, who exercise it through the Holy Spirit, the Power of God that dwells within the Church. The institutional authority in the hierarchy is believed to express the activity of Christ. As an institutional organ, the hierarchy is responsible for the organized life of the Church.

An organized ecclesiastical life is expected to foster the exercise of all kinds of EPISCOPE (i.e. oversight, supervision or watchful care, such as parents’ care for children, teacher’s for students, superior’s for inferior and the like), through its hierarchical ministry over the proper functioning of the different Spiritual gifts and services within the Body of Christ. The Ethiopian clergy, through their private conversations, personal contacts and sermons, exhort the people to exercise their Christian duties in the best way possible. After the worship, the priests regularly meet the people in the Church premises to instruct them in faith and tradition. They also act to settle domestic disputes among the member of the Church.

The clergy act in obedience to the bishop of the eparchy within which they are given to serve; and the bishop, besides his administrative responsibilities, exercises pastoral supervision over the ministry of the clergy. Thus, the bishop of an eparchy represents the unity within it.

Certain Distinguishing Features of the Ethiopian Hierarchy
Being an autocephalous Church, the Ethiopian Church had its constitution based on the principle of self-government in which the hierarchy and laity share and co-operate. It has always been the official Church of Ethiopia, and has been supported and protected by the Emperors of Ethiopia. All important nomination within the Church are subject to the approval of the Emperor, who is acknowledge as the “Defender of Faith.”

Even though Ethiopia had no national Patriarch until recent times, there bad always been an ETCHEFE besides the ABUNA to hold the administrative authority of the Church. The power of ordination and pastoral supervision belonged to the ABUNA, while the juridical responsibilities were the rights of the ETCHEGE. The ETCHEGE always was an Ethiopian, a celebrate monk, nominated by the Emperor in consultation with the Church. With the emergence of autocephalous status this double office has been vested in the Patriarch.

The three-fold hierarchical structure, namely, episcopate, presbyterate and diaconate, has subdivisions under each of them. Thus episcopate includes Patriarch, Archbishops and Bishops.

The Ethiopian Church has the custom of having numerous priests assisting the Rector of the local Church. In the cities, the Rector of a parish is made by appointment. Honorable titles are given to the Rectors of the important city Churches. It is of interest to mention a few of them. NEBURA’ED is a title given to the Rectors of Aksum Church and of the Church of St. Mary, Addis Alem in the Shoa Province. NEBURA’ED means ‘one upon whom hands are laid’, and it refers to an office of authority. The NEBURA’ED of Aksum is also the governor of the Aksum district. LIKE SIRTANT (chief of the authorities) is the title given to the Rector of the Holy Trinity Cathedral in Addis Ababa. There are, besides, other titles such as LIKE LKAWENT (chief of the learned), MELAKE SELAM (angle of peace), MELAKE GENNET (angle of paradise), MELAKE HAIL (angle of power) and others. As a significant feature in rural areas the accession of the chief-priest to his status is not by appointment. One among the local clergy emerges to this status on the basis of character, ability, virtues and personal qualities. Next to the Rector of each church is the GEBES, a priest who is the treasurer, holding authority over the church property.

Besides the priests there is a group of deacons in every church assisting the presbyters in worship and administration. Each church has its own Archdeacon as leader among the deacons.

The class called DEBTERA is unique feature of the Ethiopian Church. As an order of singers, it corresponds in some ways to the choirs in other Churches. Although the DEBTERA do not belong to the ordained hierarchy, they are a class by themselves, to be found in every Ethiopian Orthodox Church, closely associated with the priests and deacons in assisting the services of worship. They have their required education and practice in Church music. Their ecclesiastical dance, performed with solemnity and sanctity, makes their role in the Ethiopian Church distinctly unique. With rhythmic movements, steps and musical accompaniment their performance adds to the beauty of the worship and of special festive celebrations.

Until the present day, many of the churches and church institutions have remained the source of basic elementary education for the Ethiopian population, and the hierarchy plays a key role in it. Until the introduction of modern education, the teaching ministry was the prerogative of the teacher-priests of the Church.

Most of the clergy have their required education in the ecclesiastical language, Ge’ez. A small percentage of them have received modern education. Ge’ez is a rich language with a large mass of theological, historical and biblical literature, with which many doctors of the Ethiopian Church are well acquainted.

Source
Written by Professor Sergew Hable Sellassie and Professor Tadesse Tamerat
“THE CHURCH OF ETHIOPIA A PANORAMA OF HISTORY AND SPIRITUAL LIFE”
Addis Ababa –December 1970. A publication of the EOTC