The History of the Music of The Ethiopian Church 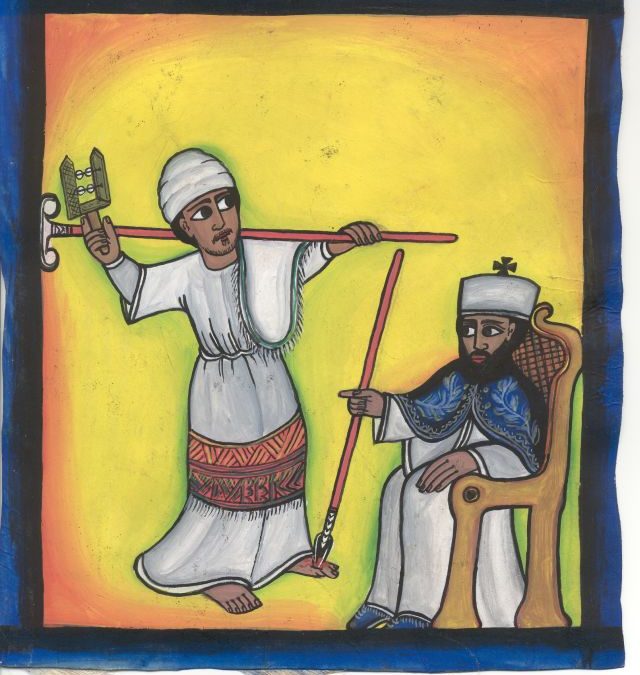 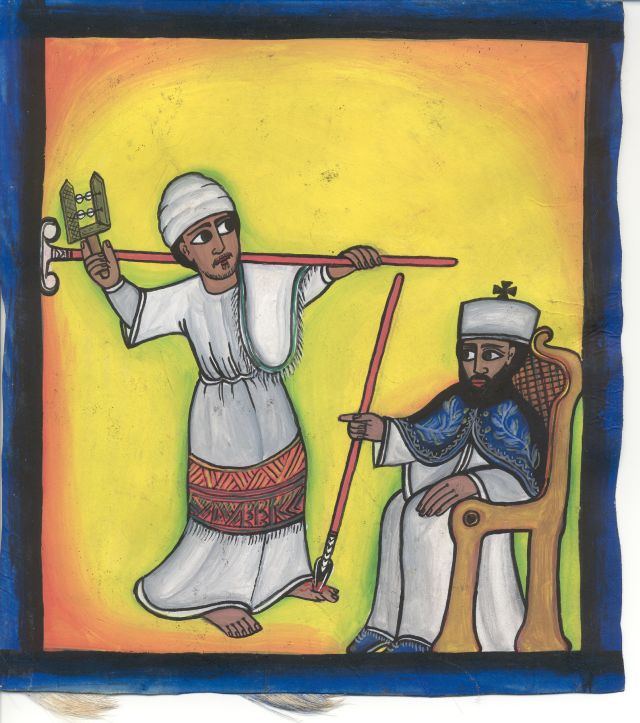 Introduction It is eminently proper that man in his worship of God should render to Him all that is most sublime and most beautiful and his homage can be expressed not only in words but in sweet sounds, music, which in all true religions is an exalted prayer, an effective expression of religious feeling.

The Ethiopian Church has made her music appropriate to the spirit of her services adapting it to the nature of the religious at which it is used, to the season of the ecclesiastical year and to the solemnity of the feast, making it grand and exultant on festivals of joy, and mournful in seasons of penance and in services for the dead. Adoration, thanksgiving, supplication, sorrow, joys and triumph are found in the zema (tone) of church music.

The Liturgy Sacred liturgy is the very heart of Ethiopian Orthodox worship. All the various kinds and types of Orthodox prayer and ritual cluster around the Sacrifice of the Mass which was instituted by the Lord the same night in which He was betrayed (1 Cor.11: 23-25).

The Ethiopian Liturgy is divided into two parts, the introductory part called Ordo Communis and the Eucharistic part called Anaphora. The Anaphora is the more solemn portion of the Liturgy, the central point of which is the great Oblation. It commences with the words “Sursum Corda”, or with their equivalents, which occur in all Liturgies, and includes the rest of the services to the end.

It is wrong to speak of various Liturgies of the Ethiopian Church. It is more precise to speak of various Anaphoras. It is the anaphora, the central part of the service corresponding to the Western Canon, which varies, while the common framework, the Ordo Communis, as it is generally called, remains invariable. The phrase “Qedasse of St. Dioscorus”, for example may mean either the variable part, the Anaphora, which bears the name of that Saint or the Ordo Communis together with the same Anaphoras.

The Anaphoras are officially fourteen, the basic one in normal use being that of the Twelve Apostles. In the some ancient monasteries about six other Anaphoras are used. The Ethiopic Liturgy was the first to be published of all the Oriental Liturgies. It was printed at Rome in 1548.

These are 14 Anaphoras ascribed to various saints, but only one is normally used, the alternate once being only for rare occasions. The normally one, that of the Twelve Apostles, is fundamentally identical with the Coptic Liturgy Of St. Cyril, although much more developed. The majority of these Anaphoras are comparatively late, apparently coming after the tenth century. The Anaphora of our Lord is used on the feasts of our Lord and on Mount Tabor; our Lady on the feasts of our Lady Mary, Gabriel and Dacesius; John the Son of Thunder on the feasts of St. John the Evangelist, St. Stephen, St. George, all Martyrs and Christmas; John Chrysostom on vigil of Passover, Day of Our Saviour, Feast of Cross, feast of John Chrysostom; Athanasius on Christian Sabbath; Epiphanius on Baptism day, the month of Rains; the 318 Nicean Fathers on feasts of Kana of Galilee, Gena, 24 Heavenly Priests; Gregory Nazianzen, Hosanna Feast and at Passion; Dioscorus on Ascension, Pentecost; Basil, feasts of all Patriarchs and Bishops; Cyril, on feast of Cyril the Patriarch and feasts of all the righteous and prophets; James Serug, on St. Michael and St. Gabriel, all Angels.

Liturgy is celebrated daily. In addition to the celebrant (main priest) and at least one other priest, the presence of three deacons is required. The Ethiopic Liturgy is an expansion of the version of St. Mark, the rite used by the Coptic Church in Egypt. It is divided into pre-anaphora and anaphora. Anaphora corresponds to CANON of the Mass in the Western Churches. While the Western Churches has one anaphora (canon), the canon of the Mass with its Preface, there are fourteen Anaphoras in the Ethiopian Liturgy. However, the anaphora of the Twelve Apostles in the standard form in the Ethiopian Church and the others are used on special days.

Synopsis of the Ethiopian Orthodox Liturgy of the Apostles

While the believers assemble in the church, the priest conducts the service of preparation.

The introit is chanted while the bread for consecration is brought from Bethlehem (Place where wine and bread for Mass are prepared). The bread is taken in procession thrice around the altar. Wine is poured into the chalice and offertory prayers are said.

“Missa Fidelium” begins with the priest’s prayer for peace and is followed by the Deacon’s Litany for all the faithful. The Creed is recited by the deacon. Lavabo or priest’s washing of hands is followed by the “kiss of peace” in the form of the people bowing to each other.

The anaphora proper begins with “sursum corda” (Lift up your hearts): following the sursum corda and the thanksgiving for redemption (Preface), there are the commemoration of the saints and the Intercession for all the faithful. This is followed by the rest of the Eucharistic Prayer including the Sanctus (Holy, Holy, Holy) the words of Institution, Anamnesis and Epiklesis or invocation of the Holy Sprit for the consecration of the element.

Fraction follows and the Lord’s prayer (Pater Nostre) is said. The prayer of penitence is said by the priest and the prayer of Intercession follows. The priest declares, “Holy things to Holy”, elevates the host of communion follows. Prayers of thanksgiving are said and the priest blesses and dismisses the people.

Saint Yared The Deggua or hymnary is attributed to Saint Yared, a scholar who lived in Aksum in the 6th century. During the course of the centuries Hymns have been added by various composers. He was caught up into paradise and there received the precepts that were to guide him. These precepts are contained in the Mezegeba Deggua (Treasury of Plainsongs). It is he who invented the three modes of chanting used in the church and known respectively as geeze, ezil and ararai.

The Antiphony of the church is known as the Mawaset (Answers). It consists of anthems for special festivals through out the year. The “Meraf” also has hymns and chants for the festivals of the year.

Certain types of hymns or poems have become particularly popular, and the Qene is one of them. There were short hymns often extemporized, which were sung after certain verses of the Psalter. Another well-known type was the “Salam.” The “Malkea” was a special favourite. In this type the poem consists of numerous stanzas. In each stanza one member of the saint’s body is greeted, e.g. the hair, the head, face, eyebrows, eyes, ears, cheeks, nose etc. chanting by priests is accompanied by the beat of drums and the silvery tones of sistrum-cymbals. The gold-embroidered star-ornaments on the velvet priestly robes and brilliant coloured ceremonial umbrellas gleam as the priests sway to the measured rhythm of David’s ancient priest dance.

The instruments used in the music include the tsenatsil, a type of sistrum, the kebero, a large drum, and a hand-bell. The three modes mentioned are used as follows: Geeze is used for feriae (ordinary days); Ezel is used on fast days and during Lent; and Ararai is used for principal feasts.

In summary antiphonal chanting or singing, called “Deggua”, forms the basic body of the music; in addition, zemaria is used when poetry is sung as in the psalms of David, Mawaset corresponds to some extent with the congregational responses used in western churches and Meraf is used without the drums for ordinary daily services. These four types of singing may employ any of three types of zema (modes of tones). The music is Middle Eastern in style and Arabic in derivation; it is restrained, strophic, ametric and sung at very slow tempos and organized antiphonal at a leisurely pace.

A notable feature of this music is antiphony, sometimes between two voices or between a solo voice and a chorus. The chorus sings in unison. On some occasions there is true polyphony within the chorus and between the chorus and a leader.

Ethiopian church music is most expressive in its praise of the creator and thus a worthy means for the soul to elevate itself to God.

Se’atat, the Horologium There are two types of Horologium, for the day and for the night. The Horologium was composed by distinguished 15th century scholar, Abba Giyorgis of Gascha; during the ensuing it was gradually enriched by additional hymns and prayers. In big churches it is usual for monks, priests and deacons to conduct the Se’atat in the northern part of the ambulatory, while the Debteras are conducting a different service.

The book of Se’atat contains the great public prayers of the Church, not necessarily said in public but always offered in the name of the church. It is recited at stated hours in churches, monasteries and outside. It is divided into seven parts known as canonical hours and each part is recited at its own hour. These hours are known as Night, Prime, Terce, Sext, None, Vespers, and compline. To be more exact the first of the canonical hours is night or matins (morning office) which is followed by lauds or praises of God. These are reckoned as one “hour”. The next division is prime or first because it is said at “first hour” or sun rise. Then terce or third, recited at the third hour. Sext or sixth at noon; none or ninth at three O’clock; Vespers is next, signifying evening services, and then comes compline or the completion.

The office contains psalms, discourses by the great fathers of the church, hymns and prayers. This office is an abundant treasure of grace. Deacons stand for the “gibre leilit” or night service and chant the “Se’atat” or Book of hours, serving till dawn. There was an arrangement under which a debtera held some church land and was bound in return to recite the Se’atat or Hours of the night at certain times, or held land for which he was bound to recite the “Hours of the Day” in the church. But the recital of the office is not obligatorily imposed on priests and deacons.