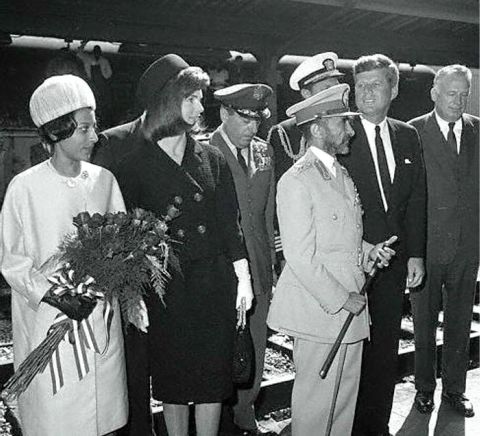 As you say, Ethiopia and the United States are separated not only by geography but by history and culture, but I think that they are bound together by necessity, and that is the necessity for all sovereign free countries to maintain the most intimate association. So we are very proud to have you here because of what your country has done, what it is doing, because of the hospitality you have shown to my fellow countrymen when they have gone there to work or to visit.

Most of all, we are glad to have you here because of your own extraordinary record. Those of us who have held office for a comparatively brief time are somewhat awed to realize that you have borne the responsibility of leadership in your country for more than 45 years. For a good part of this century, with all the changes that it has brought to not only your own country but to the continent of Africa, and so much of the West during this whole period, the central thrust of burden has been borne by you. And to have borne it with such distinction in other days and to still bear it with such force-demonstrated by the fact that your capital was chosen by your fellow leaders of Africa to be the center of this great, cooperative movement which was symbolized by the summit meeting in your capital and which was made a success by your own very patient efforts–brings accord out of what could have been on occasion perhaps a disagreement.

So, looking to a long past, looking to a promising future, we want to say, Your Majesty, that we are proud to have you here, we have been honored by the visit, and I hope that this short time here in Washington will remind you once again of how strongly your place is secured in the affection of all of the people of the United States. I hope all of you will join with me in a toast to His Imperial Majesty.