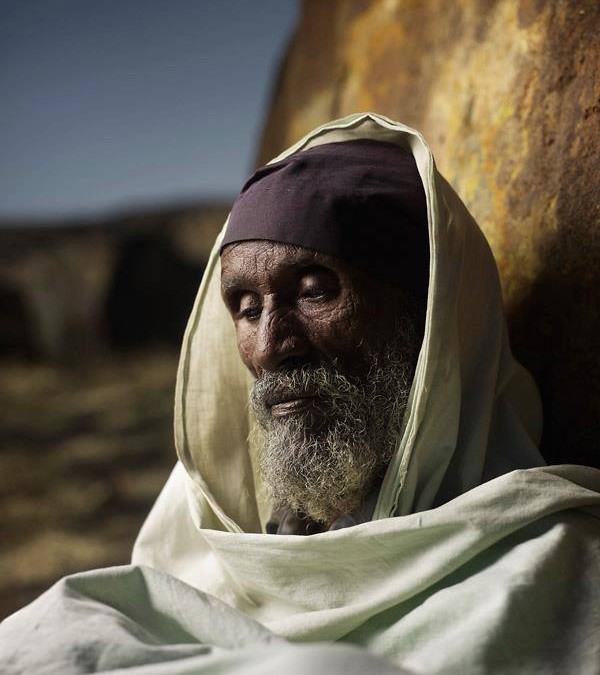 On this day the holy and blessed Abba Makarawi, the bishop, became a martyr. This father was of the people of the city of ‘Esmun Zarays, in the south of Egypt; he was one of its nobles, and was appointed Bishop of the city of Nakyos. When the days of tribulation came, a royal judge whose name was Yofanyos arrived in the city, in order to torture the Christian people. And he heard the report of this holy bishop, Abba Makarawi, and he sent a message to the people to bring him to him. And before this holy father came into the judge’s presence, he entered the church and went to the holy altar, and lifted up his hands, and prayed. Then he laid the sacred possessions, and the holy vestments for the consecration of the Eucharist in a certain place, inside the sanctuary. And he begged and entreated our Lord Jesus Christ, to Whom be glory, to protect the Church, and he cried out as he wept loudly, “O ye gates of the daughter of Zion, who will not permit the light of the sun to rise upon you? Guard ye the sacred possessions of the sanctuary of God.” Then he went out and departed with the royal messengers, and arrived before the judge, who asked him his name, and what city he came from, and what his occupation was. When the judge learnt that he was Bishop of the city of Nakyos, he commanded his men to beat him, and to degrade him, and to melt silver and lead, and to cast the molten metal into his face. And God gave him strength to endure, and fortified him, and raised him up safe and uninjured. After this the judge sent him to Herminius, governor of the city of Alexandria, and he commanded his men to shut him up in prison, and they did so. And God wrought very many signs and wonders by his hands. And among them was the healing of the son of Julius, [governor of] the city of ‘Akfahas, whose name was Eucharitus and who was paralyzed in his feet and hands; and the holy man prayed over him and he was healed of  his sickness. After this he consecrated the Offering in the house of Julius, and administered to those in it the Holy Mysteries; and the people made an agreement with Julius that he should bury his body, and write the story of his fight. And when Herminius, the governor, heard of the signs and wonders, which Abba Makarawi wrought, he commanded his men to torture him. [They broke him on] the wheel, and cut off his members, and cast him as food to the lions, and threw him into the sea, and hurled him into a red-hot oven. And in all these tortures the holy man was victorious, and he was strong in the strength of our Lord Jesus Christ, to Whom be glory! And He raised him up sound and uninjured. There was a certain sister, a virgin, a ministrant in the church of our Lady Mary, and she had two brothers, one of whom was called John and the other Isaac. And they came to the holy man whilst he was in prison, and they wept before him, saying, “Thou hast been a father to us in the place of our own father. Why wilt thou go and leave us widows and orphans?” And the holy man comforted them, and sent them back to their houses. And Julius advised the governor, saying, “Write down the story of the fight of this elder, and be at peace.” And he accepted his words, and commanded his men to cut off the head of Abba Makarawi, and they cut off his head with a sword, and he receive the crown of martyrdom in the kingdom of heaven. And the blessed Julius took his holy body, and prepared it for burial, and swathed it in splendid wrappings embroidered in gold, and he laid a cross of gold on his breast, and sent it with his slaves to the city of Nikyos. There was a fair wind, and the boat sailed swiftly, and it came and stopped by the gate of the city ‘Esmun Zerays; and the sailors wished to move the boat, but they were unable to do so.  And when they had toiled hard, a voice went forth from the body of the holy elder, saying, “This is the place wherein God is pleased that my body shall rest.” And they made this known to the people of the city, who went out to it, carrying palm branches; and they carried it in with great reverence and laid it in their city. And all the days of his life were one hundred and thirty-one years. Of these he passed eight years in learning the Books of the Holy Church, and he spent twenty-four years in completing his knowledge of the ordinances of the office of deacon. Then he was appointed priest, and held this office of thirty years. After this he was consecrated bishop, and he held this office for sixty-nine years. And he finished his good fight, and received the crown of life from our Lord Jesus Christ.

And on this day also died Gregory, the seer of things hidden, of the city of Roha (Eddessa). This Gregory was in his early life a sinner, and a man of violence. Then he turned to God, and became a monk, and he contended strenuously until God showed him the abode of the righteous, and their abundant joy, and the sufferings and tortures of each of the damned.