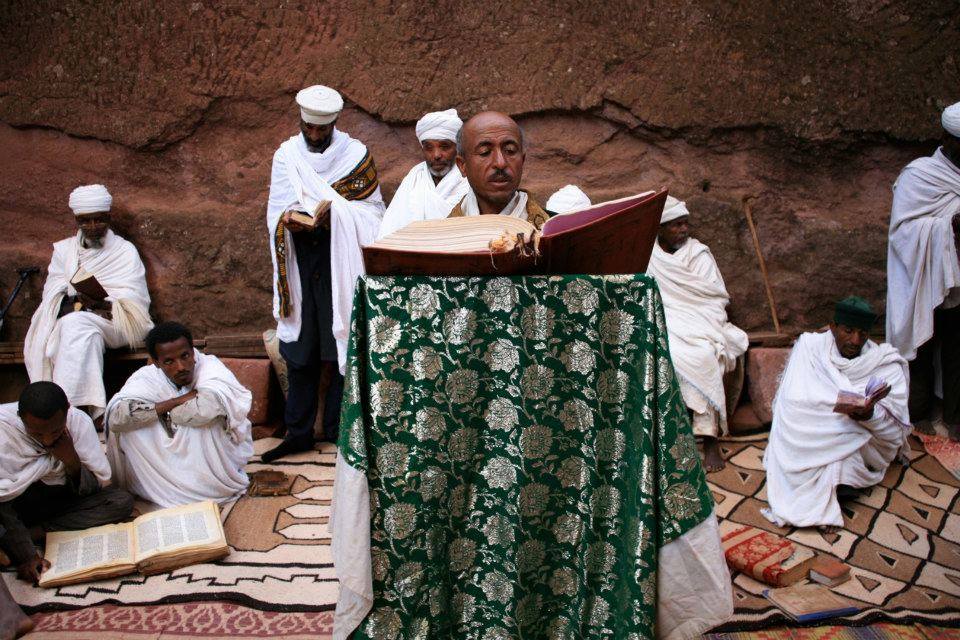 On this day died the holy father, Abba Sarapamon, the strenuous ascetic and abbot of the monastery of Saint Abba John, of the desert of Scete.  This holy man became a monk in the church of Saint Abba John in his youth, and he dwelt there and ministered to the holy elders, and fought a good and strenuous fight for thirty-two years; then he was appointed abbot of the monastery of Saint Abba John.  And he added to his works of righteousness, and to his ascetic labors, and he fasted and prayed and kept vigil continually, from the time he became a monk until he died.  When he had held the office of chief priest for twenty years, he shut himself up in the church, and up to the day of his death never saw a man again.  He died fifteen years after, and during these fifteen years he never ate nor drank, except at the beginning of the Sabbath, and on the First Day of the week.  When the time of his death drew nigh, the angel of God appeared unto him in the desert, and gave him a cross of fire and said unto him, “Take this cross in thy hand.”  And the holy man said unto him, “How can I hold fire in my hand?”  And the angel answered and said unto him, “Fear not, for our Lord Jesus Christ, to Whom be glory, hath not given unto fire dominion over thee”; and he stretched out his holy hand and took the cross from the hand of the angel.  And the angel said unto him, “Be strong, and received the Holy Mysteries; at the end of the third day I shall come and take thee.”  And when he woke up from his sleep, he told the holy elders what he had seen, and they embraced him, and wept, and entreated him to remember them; and on his part he entreated them to remember him always at the time of their prayers.  Then he received the Holy Mysteries and died in peace on the third day.  And the holy elders who dwelt near him swathed him for burial, as was fitting, with the singing of hymns, and funerary chants, and they buried him in the grave of the righteous.

And on this day also Saint Eudoxia became a martyr; now her name is interpreted “Peace with good will.”  This holy woman was a Samaritan, and she came from the city of Ba’Albak, on the borders of Basri, in the neighborhood of Mount Lebanon, in the reign of Trabyanos (Trajan, or, Tiberius), Emperor of Rome.  Her father’s name was Yonas, and her mother’s name was Tababet, and in her early life she lived by prostitution and lewdness.  And she used to beautify her face, and adorn her person with beautiful ornaments, so that she might lead the multitude astray, and make them fall into sin with her; and by such lewd life she acquired great riches.  And a certain righteous monk, of the men of Jerusalem, whose name was Germanus, heard the report of her, and he visited her, disguised as one of those who were in the habit of visiting her.  And when he had entered he sat down with her in the house, and began to rebuke her with serious and terrifying rebukes, and he reminded her of Gahanam, and of the worm that never sleepeth, and the outer darkness, and of each of the fearful punishments, which are therein.  And she answered and said unto him, “Is there a resurrection of bodies after death?  After they have become dust, will they be punished?”  And he said unto her, “Yes.”  And she said unto him, “What is the proof of this statement?  It is not written in the Law, which God gave unto Moses the prophet and to our fathers, and they did not believe.”  And he revealed unto her what is written in the Old and New Testaments concerning the resurrection of the dead, on the day of Judgment, and concerning the punishment of sinners, and concerning the joy of the righteous.  And his words and his rebuke entered her heart, and she believed that bodies will be raised up on the day of Judgment.  And she said unto him, “If I turn from my prostitution will God accept me?”  And Saint Germanus answered and said unto her, “If thou wilt believe on the Lord Jesus Christ, to Whom be praise, and believe that He came into the world, and took away the sins of men by His crucifixion for their sakes, and if thou wilt repent with sincere repentance from this moment, and wilt be baptized with Christian baptism, God will accept thee, and will not remember any of the sins which thou hast committed.  Nay, thou wilt become as thou wast on the day when thou wast born from thy mother’s womb, and there will be opened unto thee the True Faith of our Lord Jesus Christ, to Whom be praise!”  And she asked him to baptize her with Christian baptism, and he took her and brought her to the Bishop of Ba’Albak.  And she confessed before him the Holy Trinity, and the Incarnation of the Word of God, and His Crucifixion and Resurrection.  And the bishop stood up and prayed over the water, so that he might baptize her with Christian baptism, and God opened the eyes of her heart, and she saw a shining angel leading her to the water, and other angels rejoicing and exulting for her sake.  And she saw also faces, which terrified her, and a black and horrible being who tried to drag her from them, and he was wroth with her.  When she saw this sight the desire for Christian baptism increased in her, and she repented, and straightway she was baptized with Christian baptism.  And she gave all the riches, which she had collected by her sinful trade to the poor and needy, and she entered one of the houses of virgins, and she put on the garb of the nun, and fought a good and perfect fight.  And Satan entered into the heart of one of the men who used to commit fornication with her, and he made an accusation against her to the governor, who commanded that his men should bring her before him.  And when she came she stood at the door of the hall, and she found in his house great lamentation and weeping, for the governor’s son, who was dead.  And she came into the house, and prayed, and entreated our Lord Jesus Christ, to Whom be praise! And He raised up the son of the governor from death.  When the governor saw this miracle he marveled exceedingly, and he believed on our Lord Jesus Christ through her, with a firm belief.  After this another governor, whose name was Diogenes, was appointed in his stead; and he heard the story of this virgin, and had her brought before him, and she saw standing before him a certain young man, who was blind of an eye, and she made prayer and supplication over him, and she made the sign of the Cross over the eye that was blind, and it was opened forthwith, and the young man saw clearly with it; and the governor sent the holy woman away.  After this another governor, whose name was Bakinikos, was appointed in the place of Diogenes.  And he heard that story of the holy woman Eudoxia, and had her brought to him so that he might torture her.  And she besought our Lord Jesus Christ to give her a portion with the martyrs, and the Lord received her petition.  And the governor commanded his men to cut off her head, and they cut it off with the sword; and she received the crown of martyrdom in the kingdom of the heavens.

Salutation to Gabra Manfas Kedus Rabbuni who subdued lions, and made wild beasts his servants.

And on this day also died Abuna Theodore, Abbot of Dabra Libanos; he was the fifth of those who sat upon the throne of Abuna Takla Haymanot.  This father was from his youth up a habitation of the Holy Ghost, and he was a follower of the Law of the holy fathers who were before him, and it was therefore most fitting for him to sit upon the throne of Abuna Takla Haymanot.  He brought his days to a close with strenuous devotion to fasting and prayer, and he fulfilled all the ordinances of purity even like the angels.  And he passed from the labor of this world to the rest, which is forever.