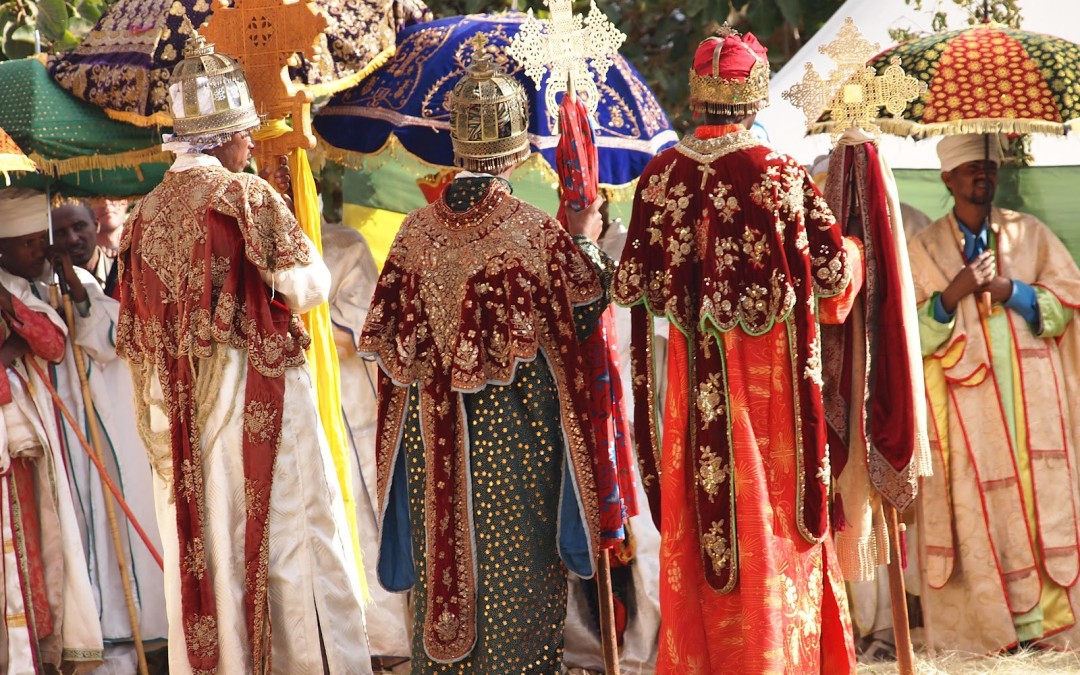 On this day Saint Dioscoros became a martyr in the days of the reign of the successors of Muhammad the prophet.  This holy man was a native of Alexandria, and certain men made him leave the Christian Faith of his fathers, and brought him into the Faith of the Muslims, and he remained in their belief for a few days.  Now he had a sister in the Feyum, who was married to a certain believer, and when she heard that her brother had abandoned the Faith of our Lord Jesus Christ she was exceedingly sad.  And she sent him a letter, saying, “I would rather that news had come to me telling me that thou hadst died a Christian, nay, I would have rejoiced therein, than that this news of thee which hath reached me, telling me that thou art not dead, and that thou hast abandoned the Faith of Christ, thy God.”  And she added many other words of rebuke in that letter, and at the end thereof she said, “Know thou that this letter [marks] the ending of the love which was between thee and me.  From this time onwards I will never look upon thy face.  Send me no more of thy letters.”  When he had red his sister’s letter, he wept bitterly, and he smote his face and tore his beard.  Then he rose up forthwith and girded up his loins, and prayed a long prayer, and entreated God with many entreaties, and he made the sign of the life giving Cross-over himself, and went out from his house and wandered about in the city of Alexandria.  And when the Muslims saw him they seized him and brought him to the governor, who asked him what had happened to him; and Dioscoros said unto him, “I am a Christian, and I know nothing except this.”  And the governor answered and said unto him, “Didst thou not abandon the Christian religion, and adopt ours?”  And Saint Dioscoros answered and said unto him, “It is written in the Holy Gospel, ‘He who doth not believe in the Son shall not see life, but the punishment of God shall descend upon him.’  For this reason I believe in the Lord Jesus Christ, the Son of the Living God.  I was born a Christian, I will die a Christian.”  And the governor was wroth with him, and said unto him, “If thou dost not turn from this counsel of thine, I will torture thee very severely”; but Dioscoros was not afraid of the governor’s tortures, and he did not turn from his good counsel.  And the governor beat him for a long time, and inflicted great pain upon him, and then shut him up in prison, where he remained for a few days.  After this the governor had him brought out of the prison house, and promised him, swearing many oaths as he did so, that he would give him much money if he would turn from his counsel to the Muhammadan Faith, and that if he did not, he would burn him in the fire.  And Dioscoros said, “I will not died outside the life-giving Christian Faith”; and the governor commanded that they should burn him.  And his men dug a large pit outside the city, and they filled it with wood, and they set fire to the wood, and the flames of the fire mounted up to a great height.  And the men of the city beat him sorely and they gashed his body with butchers’ knives.  Afterwards they cast him into that fiery pit, and he delivered his soul into the hand of God and received the crown of martyrdom in the kingdom of heaven.

And on this day also is commemorated the death of Saint Theodosius the Confessor, Bishop of Corinth, and a native of Cyprus.  Julius, governor of the island of Cyprus, who had been appointed by Diocletian, heard the report of this holy man, and he had him brought before him, and demanded from him that he should deny our Lord Jesus Christ, and that he should cast incense to his filthy idols.  And Saint Theodosius answered and said unto him, “I believe on my Lord Jesus Christ, the Son of the Living God, Whom I worship.”  And when Saint Theodosius would not obey his command, he flogged him severely and lashed him painfully with whips made of buffalo hide; then he crucified him, and made gashes in all his body.  And afterwards the governor made him lie upon an iron bed, which had been made red-hot; but none of these tortures affected him in any way whatsoever.  Then they tied to his legs long iron bands, and dragged him to the prison house, and cast him into it, and he remained in the prison house until God blotted out Diocletian the unbeliever.  And [when] Constantine the righteous emperor reigned, he commanded and he released all those who had been shut up in the prison for the Faith’s sake.  When they had set free this holy man, he returned to his country, and he filled his office, and tended his flock well; and he died in peace.

And on this day also died the dwellers in the desert, Anthony, and Arkaladius.