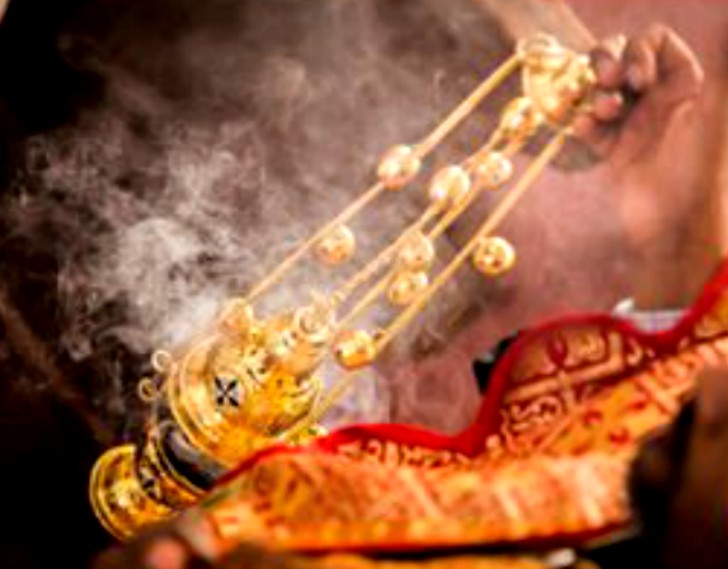 On this day Saint Arianus, the governor of Antinoe, became a martyr.  Now, after the holy men Philemon and Ablanius (Apollonius) had become martyrs, one of the believers said unto the governor, “If thou wilt take some of the blood of those saints, and wilt smear thine eye therewith, thou wilt receive thy sight”; and the governor took some of their blood, and smeared his eye therewith, and he was able to see straightway.  And Arianus sorrowed, with a very great sorrow, because of the evil things which he had done to the holy martyrs, and because he had tortured them with great severity and unmercifully.  And he rose up straightway, and smashed his idols, and believed in our Lord Jesus Christ, and forsook the torturing of those who believed in Christ.  When Diocletian heard the report of Arianus, and of how he had behaved, he sent his soldiers and had him brought to him, and he asked him why he had forsaken the worship of his gods. And Arianus began to tell him about the signs and wonders which God was working by the hands of the holy martyrs, and how, in spite of the tortures which he had inflicted upon them, and the cutting of their limbs, they rose up again with all their natural strength and health unimpaired.  And Diocletian was furious with him, because of what he said, and he commanded his soldiers to torture him, and they tortured him severely.  Then he commanded them to cast him into a dungeon, and to lock the door upon him until he died; and they did as he had commanded.  And our Lord Jesus Christ sent an angel to him and he brought him out from that dungeon, and made him to stand by the bed of the Emperor Diocletian.  And the emperor woke up from his sleep, and when he saw him he was afraid, and said unto him, “Who art thou?”  And Arianus said unto him, “I am Arianus, the governor of Antinoe.”  And the emperor was terrified because of him, and he commanded his soldiers to thrust him into a hair sack, and to cast him into the sea; and this they also did unto him, and Arianus delivered up his soul into the hand of the Lord whilst he was in the hair sack.  And when Arianus was embracing his kinsfolk and his slaves, he said unto them, “The Lord hath informed me in a vision of the night that He will heal my body, and restore it to the city of Antinoe.”  And he said unto them, “Await ye my body at the port of the city of Alexandria.”  And when the soldiers of Diocletian had cast his body into the sea, God commanded a certain whale, and he carried the saint and brought him to the port of the city of Alexandria, and laid him down on the dry beach.  And the slaves of Arianus were there awaiting him, and they took his body, and brought it to his city Antinoe, and they laid it with the bodies of the holy martyrs Philemon and Ablanius (Apollonius).  Thus Arianus finished his good fight, and received the rest of heaven.

Salutation to the four Galatians who perished with Arianus.

And on this day also Matthias the Apostle, one of the Twelve Apostles, who was appointed in the place of Judas Iscariot, became a martyr, having preached in the cities to which he had gone, and converted the people thereof to the knowledge of God.  Before this he went to a city of the cannibals, whose food consisted of the bodies of the travelers who went to sojourn among them.  Now the custom of these men was as follows:  Whenever they seized a traveler, they used to put out his eyes, and then place him in the prison house, writing down on paper the day on which they had seized him.  And they fed him in prison on grass until thirty days were fulfilled, and then they would bring him out and eat him.  When Matthias the Apostle came unto them, and preached among them, they seized him and treated him in this manner, and they put out his eyes, and shut him up in prison.  Before thirty days had passed over him in the prison house, God sent unto him Andrew the Apostle, and his disciple with him, and they came unto Mathias in the prison house, and they saw the abominable thing, which the men of the city did to the men who were shut up in the prison house.  And the men of the city knew that the apostles had come into their city, and they wanted to seize them and to kill them; now it was Satan who worked upon the men of the city to make them kill the apostles.  And the apostles made entreaty to God, and He made a stream of water to flow forth from under a pillar, which was in the prison house, and the water flowed out into the city, and rose up until it reached the necks of the people.  And the people being in sore tribulation, and having given up all hopes of saving their lives, came to the holy apostles, and wept before them and confessed their sins.  And the holy apostles said unto them, “Believe in the Lord Jesus Christ, and ye shall be saved”; and all the people believed.  And the apostles admonished them, and taught them the mystery of the knowledge of the Incarnation of our Lord Jesus Christ.  And the holy apostles prayed to God, Who made the water to cease through their prayers, and then they baptized them in the Name of the Holy Trinity.  And they entreated our Lord Jesus Christ to remove from them the disposition of wild beasts, and He did so, and they became mild and gentle folk and ate the food which men are wont to eat.  And the apostles appointed over them bishops and priests, and they tarried with them for a space of thirty days, during which they instructed them, and confirmed them in the Right Faith, and then they departed from them, and the people entreated the apostles to come back to them speedily.  Now Saint Matthias the Apostle went to the city of Damascus and preached therein in the Name of our Lord Jesus Christ.  And the men thereof took him, and laid him upon an iron bed, and they lighted a fire there under and kept it burning for seven days and seven nights.  And when they came to him to look upon him, they found his face shining with a great light, like the light of the sun; and the fire had not touched him at all, and his body and the hair of his head, and his apparel, had not in any way suffered.  Then they took deep counsel together, and they lighted a fire and kept it burning under the iron bed whereon the holy man was lying until fourteen days had passed by.  After this [time] they brought him out from the fire, and they found him sound, and whole, and uninjured; and they marveled exceedingly, and they all believed on our Lord Jesus Christ through Matthias the Apostle, who baptized them in the Name of the Holy Trinity.  And he appointed priests over them, and he tarried many days with them, confirming them in the Right Faith.  After this he died a happy death in one of the cities of the Jews, the name of which was Pilawon, and they laid his holy body therein; and very many signs and great wonders took place through it, and he healed those who were sick.

And on this day also died the holy father Abba Julianus, Archbishop of the city of Alexandria; now he was the fourteenth of the number of the archbishops.  This holy man was a priest in the city of Alexandria, and he was so learned and wise that during his days there could not be found his like in the land of Egypt; and by the Will of God, he was appointed archbishop.  And during the days of his office he composed Homilies and many admonitory Discourses, and he taught the people continually, and admonished them, and confirmed them in the Right Faith.  And he dwelt in peace and safety during the days of his office, and all the days of his occupation of the throne of Mark the Evangelist were fourteen years, and he died in peace.

Salutation to the Seven Sleepers who, in order to escape from the service of dumb idols, betook themselves to a cave, where sleep overtook them; they are commemorated on this day.