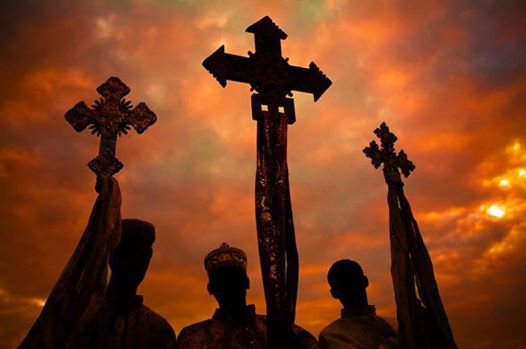 On this day the glorious Cross of our Lord Jesus Christ – to Whom be praise – appeared twice; the first time through the Empress Helena, the mother of Constantine, the righteous emperor.  For on this day, the blessed Helena, the blessed of the Lord–her son Constantine having entered the Christian Faith–went to Jerusalem, and discovered the wood of the holy Cross of our Lord Jesus Christ; and many churches, and the holy churches which were in Jerusalem, were built by her.  When her son Constantine believed in our Lord Jesus Christ, and was baptized with Christian baptism, the holy woman Helena went to the city of Jerusalem (and with her there was a large company of soldiers) and sought for the Honorable Cross.  When she found that there was no one who would tell her the place thereof, she took an old man, a Jew, and put him under the tribulation of hunger and thirst.  And when he had suffered great tribulation through hunger and thirst, he spoke unto Helena, saying, “Clear out the site of Golgotha.”  And Helena commanded the Jews, and they cleared out the site of Golgotha.  Now the Jews had taken counsel together, and had issued a decree that all the offal and filth, which each man cast forth from his house, should be thrown out on Golgotha, on the tomb of our Lord Jesus Christ, the Nazarene – to Whom be praise!  And the Jews continued to heap offal on Golgotha in this wise for a period of two hundred years and more, and until the Empress Helena came to Jerusalem; and the offal, which had been cast out there, made a very great heap.  And when the Jews had cleared it away, according as the empress had commanded them, there appeared in the midst of them three crosses.  And because they did not know which of the three crosses was the Cross of our Lord Jesus Christ, they brought a dead man, and they laid upon him first one cross and then the second, but he did not rise up; and when they laid the third cross upon him he rose up immediately.  And Helena then knew that that cross was the Cross of our Lord Jesus Christ, and she and all the believing people bowed down before it.  And it is written in another book that she sent that Cross to her son, that which remained was the base wherein the Cross was fixed, and she sent one half of that to her son, together with the nails.  And she built churches, [and] holy shrines, the decorations and structures of which are described in the section for the seventeenth day of the month of Meskaerem.  And it came to pass in the days of Heraclius, Emperor of Rome, when the Persians reigned in Egypt, and when the men of Persia wished to return to their country, that one of their officers passed over [into Syria], and arrived in the city of Jerusalem, and he went into the church of the Honorable Cross.  And he saw in it a great light, which shone before the base (or column) wherein the Honorable Cross, and said unto him, “No one is able to hold this except a Christian.”  And he took two deacons and commanded them to take the wood of the Cross, and to become the guardians thereof; and they laid it in a chest, and did with it according as the officer had commanded them. And he took the wood of the Honorable Cross, and he made captive very many of the men of the city of Jerusalem, and he returned to his own country.  When the Emperor of Rome heard that Persians had raided the city of Jerusalem, and had carried away into captivity many men from it, and had taken away the wood of the Honorable Cross, he was exceedingly sorrowful because of these things.  And the King of Persia returned, and fought with him, and he slew very many of their men, and he went round about through all the city searching for the wood of the Honorable Cross, and he found it not. Now the officer who had taken it away had brought the two deacons to a certain place, which was nigh unto his house, and he gave them orders, and they dug a very deep hole in the ground, and buried the wood of the Honorable Cross therein, and then he slew the two deacons.  And it came to pass that a certain maiden of the children of the priesthood whom that officer had carried away captive, and who lived in his house, was looking out of the window of his house at the moment when he slew the two deacons, and buried the wood of the Honorable Cross [in the hole].  And that maiden went and told Heraclius, the Emperor of Rome, what the officer had done, and how he had slain the two deacons, and had buried the wood of the Honorable Cross. When the emperor heard this he rejoiced exceedingly.  And that maiden guided the emperor, with whom were some of his soldiers, and bishops, and priests, and they followed her until she brought them to the place.  And they dug there and found the wood of the Honorable Cross, and they lifted it up out of the pit, and the emperor, in his imperial apparel, and all the people who were with him, bowed down before the wood of the Honorable Cross, and he rejoiced with exceedingly great joy.  And the appearance of and the finding of the wood of the Honorable Cross a second time, took place on the tenth day of the month of Magabit.  Then the emperor took the wood of the Honorable Cross with him to the city of Constantinople.