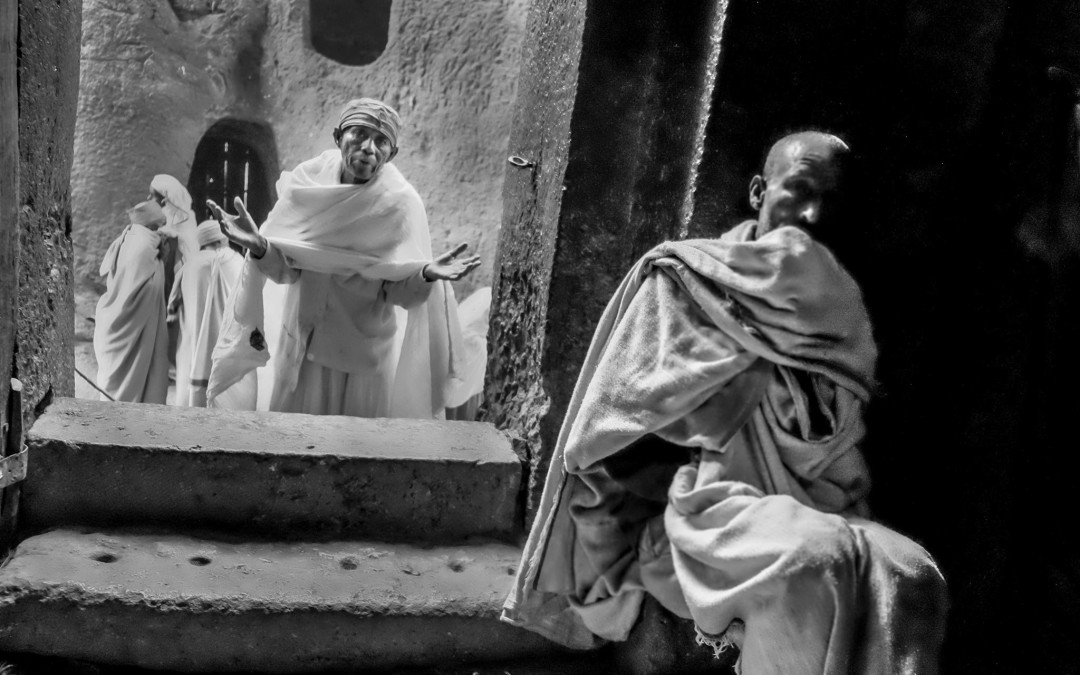 On this day Saint Tewokanitos became a martyr, in the days of the Emperor Maximianus.  This Tewokanitos was an officer in the army, and he cast away his belt; and with him was the blessed woman Alexandra, and they believed on the Lord Jesus Christ, to Whom be praise!  When Maximianus heard this, he was wroth, and he commanded his soldiers to strip off the apparel of the saint, and to dress him in the clothes of women, and to place him among the women who wove garments.  After this he ordered them to roll a red-hot wheel over him, and to crucify him, head downwards.  And they also brought a bowl which was full of boiling pitch, and they set it upon his head, so that the pitch ran down into his ears; then they took him down from the cross, and set him before the Emperor Maximianus, with Alexandra who had been imprisoned with him.  And the emperor commanded them to cut out the tongue of Tewokanitos, and to tie a huge stone to the necks of the saints, and to cast them into the River Euphrates.  And they ended their martyrdom, and the brethren found their bodies on the river bank, and they buried them.

On this day also Basilaos (Basil) the bishop became a martyr, Abba ‘Armon, Archbishop of the city of Jerusalem, appointed this holy man (as well as others) to be a bishop, not over any one particular city, but he sent him to preach in the cities of the ‘Aramawiyan (i.e. pagans) who possessed neither religion nor faith.  And this holy man Basilaos (Basil) went to a city of the infidels, unto whom he preached the Gospel of our Lord Jesus Christ; and they beat him and drove him out of every one of their cities.  When he came into the cities of the civilized peoples, and preached in them the preaching of the Holy Gospel, half of the people believed on the Name of our Lord Jesus Christ, and the other half of the people who believed nothing drove him away.  And he went forth outside the city and lived there in a cave, and he made supplication to God continually for the men of that city, and prayed that they might come into the knowledge of God, and believe on His Only Son.  At that time the son of the governor of that city died, (now he was his only son,) and his father sorrowed for him with a very great sorrow.  And the governor saw his son in a dream standing before him, and he said unto him, “O my father, call Saint Basilaos (Basil) the bishop, and ask him to pray to our Lord Jesus Christ on my behalf.  And behold I am [living] in great darkness.”  When the governor woke from his dream, he rose up, and was frightened, and he took with him the elders of the city and went to the cave of Saint Basilaos (Basil); and he asked him to come with him into the city and to pray for his son.  And the holy man accepted his petition, and came into the city, and he prayed over the grave of the son of the governor, and he rose up forthwith alive, before them all.  And the governor believed on God, our Lord Jesus Christ, to Whom be praise!  And all the men who belonged to him, and very many of the men of the city also, were baptized with Christian baptism by Saint Basilaos (Basil).  Now there were in that city very many congregations of Jews, and they were envious of Saint Basilaos (Basil), and they joined with the men of the city who did not believe on our Lord Jesus Christ, and they caused the holy man to come to them.  And they rose up against him all together, and they beat him very severely, and they dragged him through the city until he yielded up his soul into the hand of God.

And on this day also died Abba ‘Alef, one of the Nine Saints.  [Wanting in the Bodleian MS.]

And on this day also are commemorated the martyrs Ausanius, and Ephraim, and Arcadius, and Elias.