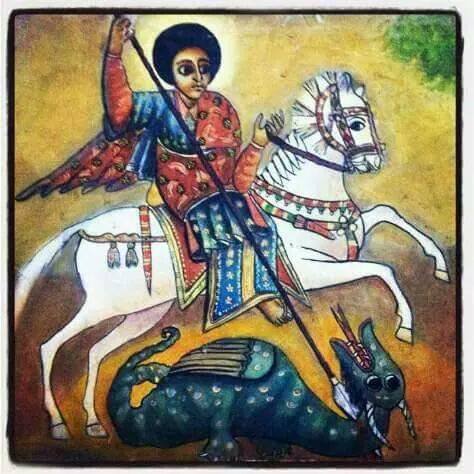 On this day took place the death of the holy father Cyril, the seventy-fifth Archbishop of the city of Alexandria; he was called the son of our beloved and acceptable priest David, the son of Lekuelekue. This father was a native of the district of the Fayyum, and he was made a priest there. Then he departed from the Fayyum and came to Dabra Filktor (Victor), the martyr, which is outside the city of Mesr (Cairo) by the Well of the Ethiopians, and he dwelt therein for many years, and fought a strenuous fight there. This father was an excellent man, and a man of learning, and he possessed very many books of doctrine, and he interpreted them by means of his fine understanding. And he came to the court of Mawa’i (i.e. the ‘Umayyad Khalifah, Mu’Awiyah, A.D. 661), the perfect king, before he was appointed to his office of archbishop. And a large company of Muslim doctors, and their teachers, held a debate with him, and they obtained from him wise answers, and he replied clearly, and satisfactorily, to every question, which they put to him on any subject. And the report of his learning and holiness having become noised abroad, the people seized him against his will, and made him Archbishop of the city of Alexandria. And he protected his flock, and he laid down rules, which were suitable for priests when they ministered in churches at times of prayer and the consecrations of the Offering. And this father sat as archbishop for six (or, seven) years nine months and ten days; and he died at the third hour and was buried in Dabra Sem’a.

And on this day also died Abba Barles. This holy man was one of the most excellent aged monks. When he heard the rumor that Saint John Mahari was accepting the words of the informants against the monks, he left the monastery, and came to Alexandria and he wrote down the names of all its whoremongers. And when he was working with those who labored, and received his wages, he would buy a sarik (i.e. a small cake made of cheap flour) for a termus (i.e. a very small copper coin), and eat, and what was left over he would take and send to one of the harlots, and give it to her and say unto her, “Make thyself ready for me this night, for I will pass the night with thee.” And he would pass the night with her, that he might keep her from sin, and on her behalf he would rise up, and pray and perform prostrations, and make supplications unto God. When the morning came he would make her swear not to tell anyone what he had done [during the night], and then he would go to his work. And he continued to go each day to one of the harlots, and behave in this wise. And one of the harlots revealed what he did [during the night], and a devil seized her, and she perished. And certain man said, “God hath treated this woman rightly, for she told lies concerning this wicked old man.” And a woman said, “There is no blemish in this old man, on the contrary he gives us money, and keeps us from fornication.” When the other harlots heard [this] they were afraid to confirm her words, and thought that they might perish as she did. And they began to revile him. And he said unto them, “I possess not flesh like [other] men. Is God wroth with the monks that He should let them die through lust?” And they said unto him, “Bring forward a woman, and change apparel with her, for that is more suitable for thee.” And he said unto them, “Yea, I will willingly dress as a woman, and lay aside evil days. Get ye from me. What do ye want? Hath God set you over me to be judges? Take care now for yourselves, for ye will not be punished for me. For the Judge is one and the day is one.” And this holy man was accepted by God, and rejected by men. The harlots derived benefit from him and they forsook harlotry; some of them followed the ascetic life, and some of them made lawful marriages. One day as he was going out from one of their houses, he met a man who wanted to come in to visit the woman inside, and he smote the holy man with his hand, saying unto him, “Thou old man! How long art thou going to continue in this wicked work?” And one day a certain man came into the house of this elder, and he found him lying down as it were asleep, but he had delivered up his soul to God. And on the floor of his house were written some words wherein he said, “O men of Alexandria, condemn no one before his time; his opportunity [for explanation] will be when God cometh.”

And on this day also died Abba Sinoda the martyr. This holy man was a native of the country of Behnesa, in the land of Egypt. And certain men laid information against this holy man before Maximianus, a governor appointed by Diocletian, and they said unto him, “Sinoda is a Christian, and he doth not worship idols.” And the governor had him brought before him, and he questioned him concerning his Faith, and the holy man confessed before him our Lord Jesus Christ, and declared that he was the True God. Then the governor commanded his soldiers to lay him out upon the ground, and to beat him with the rods, which they carried in their hands; and they did so until, is flesh was cut into strips, and his blood ran over the ground like water. Then they dragged him along the ground by his feet, and cast him into the prison house, which was dark and stank vilely. And Michael, the angel of the Lord, appeared unto him, and strengthened him, and made him whole, and healed his wounds, and he said unto him, “Be strong, fear not, for crowns of glory have been prepared for thee because of thy toil. Thou wilt be condemned to suffer great tortures, but I will be with thee according to God’s command unto me”; then he disappeared from him. When the morning had come, the governor commanded his soldiers, saying, “Go and look at that wicked man who transgressed the imperial commands, and if he is dead cast him out to the dogs.” When the soldiers came to him they found him standing up praying, and they told the governor about him, how he was whole, and unharmed, and how there was no trace of any pain in his body, and how he was praying with great fervor, like a man who was full of joy and health, and had never submitted to torture at any time. Then the governor had him brought to him and he marveled at his life (vitality?). Then he had his clothes stripped off him, and he saw that his body was whole and uninjured; and he was amazed and said, “This is the great magician whose like I have never seen before.” And he ordered his soldiers to crucify Sinoda, head downwards, and to light a fire under him; and beat him with large whips, which caused him much pain. When the governor was tired to torturing him he commanded his soldiers to hack him in pieces with swords; and they hacked him in pieces with swords, and cast him to the dogs, but the dogs would not come near him. When it mwas night the believers carried him off in secret, and they wrapped him up in new cloths, and in many tomb wrappings, and they laid him in a coffin and buried him; and many signs and healings of the sick took place through his body. And he received his crown of martyrdom in the kingdom of heaven.

And on this day also Eugenius, and Eugandarus, and Alibidius (Abiladyos) became martyrs. These holy men were Christians, through their fathers and mothers. And they walked in the path of God, being learned in all Divine learning, and Saint ‘Armos, Archbishop of the city of Jerusalem, chose them, and made them bishops, not of any known sees, but he sent them to preach the Gospel in all the cities. And they preached in many cities, and the unbelievers in one of the countries seized them, and beat them very severely, and mercilessly, and they stoned them, and then they tied ropes to their shoulders, and dragged them along the ground. And as they were being dragged along they were beaten until they died.

And on this day also Thomas the Apostle worked a miracle upon a woman with whom a devil had had intercourse for a period of seven years, for she cried out to him, saying, “O apostle of our Lord Christ, deliver me from the enemy who afflicteth me sorely.” And he said unto her, “By what means hath he found thee?” And she said unto him, “As I was going forth from the beth he met in the form of a man who was hurried and excited, but his words were clear and distinct, and he said unto me, ‘Come, let us have intercourse together, and do for me all that a woman can do.’ And I said unto him, ‘I do not want to have intercourse with thee; leave me.’ When I fell asleep at night he came and had intercourse with me, and when I try to flee he afflicteth me. I know that devils and Satans tremble at thy prayers, therefore pray for me and deliver me from my tribulation.” When the apostle heard this he prayed for her and he anathematized the Satan, and he went forth from her. Then Thomas made the sign of the Cross over her, and he administered to her the Holy Mysteries, and he sent her away to her kinsfolk.
Glory be to God Who is glorified in His Saints. Amen.