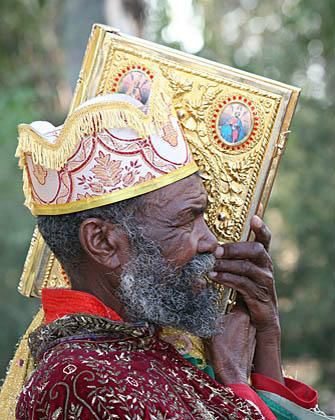 On this day Saint Isidore, the companion of Saint Sona the martyr, became a martyr. Now Sona was a soldier in the army of the governor of Farma, and he was a native of the city of Dakseya, and Saint Isidore was his friend, and they wore (?) apparel of wool, and both of them gave alms to the poor and needy when they received their hire. And both saw a vision the same night, and it seemed to them that a virgin came to them with crowns which she placed on their heads. When they woke up from their sleep, they conversed together about what they had seen, and they rejoiced greatly, and they knew that the Lord had called them to become martyrs to Him. And they rose up, and departed, and came to the governor, and Saint Sona unbound his girdle, and cast it down before the governor, and they both confessed our Lord Jesus Christ; and when the governor had heard their words he commanded his soldiers to shut them up in prison, but God sentHis angel and comforted them. After this the governor sent Saint Sona to Alexandria, and left Isidore [where he was]. After a few days the governor of Alexandria sent Saint Sona back to the city of Farma, and the two men rejoiced at meeting each other again, and they talked together, and told each other what had happened to them. And the governor of Farma tortured them very severely. And then he commanded his soldiers to dig a pit for Saint Isidore, and to light a fire therein, and to cast him into the fire; and they did as the governor commanded them. And Saint Isidore asked the soldiers to wait a little whilst he prayed, and he prayed to our Lord Jesus Christ to accept his soul, and to have a care for his body. Then he drew nigh to the pit of fire, and cast himself into it, and delivered up his soul into the hand of God; and his body was not hurt in any way by the fire, and his appearance (or, features) remained unchanged. And the mother of Saint Sona was weeping for him because of his separation from his friend; then they took the body of Saint Isidore and carried it away and laid it in a beautiful place until the end of the days of persecution. And at the time when Saint Isidore was suffering martyrdom the mother of Saint Sona saw a multitude of angels carrying away his soul, and bearing it up into heaven with great glory.